One of the most widely used methods of analysis is the measurement of light. By irradiating light, it is possible to check how much of a compound is present there.

The UV-visible absorption spectrum is a well-known measurement technique that utilizes light, and is used in many research institutions. In addition to detecting ultraviolet and visible light, there is also a widely used technique to observe fluorescence. This is the fluorescence analysis method.

Fluorescence is widely used in scientific experiments as well as in products.

Organic compounds may fluoresce if they have a conjugated structure. Fluorescent substances exist in nature and in synthetic products. Examples are the following substances.

After the Excited State, Fluorescence Appears As Light Energy

Why does fluorescence appear? This is because the molecules release energy as light.

Electrons try to return to a stable state by releasing energy. They don’t stay in an excited state forever.

In most cases, when they release energy, the molecules emit it as heat. However, there are some substances that release energy as light instead of heat. For compounds that have conjugates in their structure, the probability of releasing light energy is higher.

This is the simple principle behind fluorescence when light is shone on a fluorescent substance. Fluorescence is observed when the molecule receives energy from the light and releases light energy.

It is important to note that a different wavelength of light is observed as fluorescence than the light we shine (excitation light). For example, when we shine a black light (slightly visible long-wave UV light), it emits light that we can see.

This means that light of a different wavelength (fluorescence) than the excitation light is being emitted from the molecule.

Since the incoming energy and the released energy are the same, we can think of it as follows.

It is important to understand that the energy emitted includes heat. Therefore, when comparing the excitation light and the emitted light energy (fluorescence), we can expect the energy of fluorescence to be weaker by the amount of heat energy.

As a result, colors are observed at longer wavelengths (lower energy) in fluorescence compared to excitation light.

Black light is a type of ultraviolet light that has high energy and is difficult to see. Therefore, when a black light is shone on a fluorescent material, visible light (low-energy, long-wavelength light) can be observed.

The Measurement Method Is a Two-Peak Observation Including Excitation Spectra

The two have these differences.

If you shine a black light on them, they emit fluorescence. However, if we block out the light, we cannot see the fluorescence. Fluorescence can only be observed when the excitation light is shining on it.

On the other hand, some fluorescent materials continue to emit light for a certain period of time, even after the light exposure is stopped. This is called phosphorescence. For example, the picture below shows a road that receives sunlight during the day and shines with phosphorescence at night. 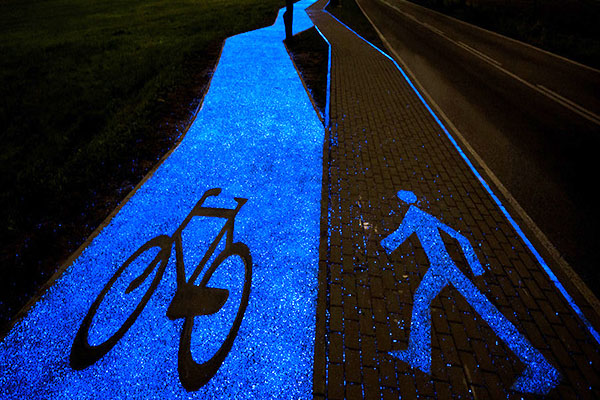 Why does phosphorescence occur? When an excitation light strikes the material, an electronic transition occurs, and the material becomes excited. The electrons then return to the ground state (the original state). In this case, the electrons emit fluorescence.

On the other hand, in some molecules, the state of the electron spin may change after the excitation light hits the molecule. This is called intersystem crossing.

After the excitation light hits the molecule, some molecules undergo intersystem crossing, as mentioned above. After entering the triplet excited state, the electrons try to return to the lower energy ground state. 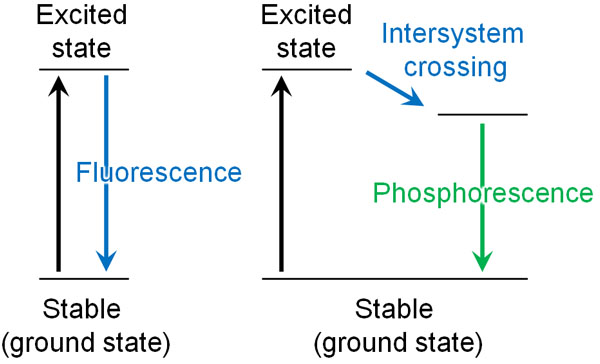 It is important to note that electrons do not enter the orbit facing the same direction. They must be paired and pointing in opposite directions to enter the orbit. This is called the Pauli exclusion principle.

Even if an electron wants to return to a stable energy state, it cannot easily do so because the electron spins are pointing in the same direction. As a result, it will emit weak light as phosphorescence for a long time.

After the light is gone, fluorescence immediately loses its light. Phosphorescence, on the other hand, continues to emit light for a long time. This difference is due to the different orientations of the electron spins.

How can fluorescence be used in scientific experiments? In this regard, it is used to measure concentration.

There are several drawbacks with techniques that measure the absorption of light, such as UV-visible absorption spectroscopy. One of the most significant drawbacks is that there are so many organic compounds with conjugated structures that, in most cases, they absorb UV light.

Other influences should be taken into account when using fluorescence spectroscopy. A compound that emits fluorescence is an inherent ability of the molecule. However, which fluorescence is emitted depends on the surrounding environment.

Because of the solvent effect, we need to use the same solvent and standardize the conditions when we do scientific experiments for fluorescence measurements.

Fluorescence measurements can be affected by the surrounding environment. Therefore, make sure that all conditions are the same for the measurement.

When measuring fluorescence, it would be nice if we could measure the fluorescence spectrum of just the target compound, but this is not always the case. Other unwanted peaks may also be observed.

In other cases, fluorescence peaks caused by solvents can also be observed.

By omitting these unwanted peaks, we obtain the following clean peaks.

If you do not operate anything, it is common that other peaks such as Raman spectra and solvent are mixed in. Therefore, it is common to measure the solvent alone as a blank.

Use of Compounds with Fluorophore in Experiments

Fluorescent materials are often used in scientific experiments. However, compounds are rarely fluorescent. Substances that emit fluorescence are limited, and the number of compounds is small.

Therefore, when fluorescence is used in biochemistry and other experiments, compounds with a fluorophore are used. As mentioned above, chlorophyll, coumarin, fluorescein, and rhodamine are known as substances that emit fluorescence (fluorochromes).

For example, we attach a fluorophore to an antibody. Since antibodies only bind to specific substances, it is possible to visualize where antibodies are clustered when they are introduced into a cell.

Many experiments in biochemistry have been carried out using fluorescence, as shown below. 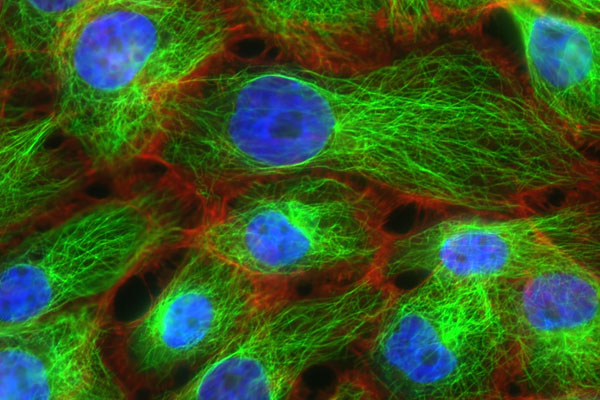 The picture above is not a method of measuring the concentration of a compound by fluorescence analysis. However, you can use fluorescent substances to understand the movement of molecules.

Xenon lamps are the most common light sources used in fluorescence spectroscopy. By shining such a light, the fluorescence intensity is measured.

For reference, the winner of the 2008 Nobel Prize in Chemistry had researched fluorescence. They won the Nobel Prize for their work on a green fluorescent protein called GFP.

By measuring the intensity of fluorescence, it is also possible to confirm how many target molecules are present in a cell.

GFP is used in many fields, such as genetic recombination technology, molecular imaging, and the visualization of molecular movements.

Principles and Applications of Fluorescence Spectra in Chemistry

One very important discipline for any chemistry major, including biochemistry and organic chemistry, is fluorescence. By observing the fluorescence spectrum, we can deduce a great deal about it.

In the past, the Nobel Prize in Chemistry was awarded for the study of fluorescence, including GFP (green fluorescent protein), which has become indispensable in molecular imaging.

Among analytical methods, fluorescence spectroscopy is one of the most important ones, as well as UV-visible absorption spectroscopy. Make sure you understand the principles and applications of fluorescence.