When molecules form bonds, they need to follow laws. Atoms are not free to make bonds with each other. There is an octet rule for molecules to form bonds.

In both high school and college chemistry, you have to think of the electrons in the molecule that satisfy the octet rule. By considering the octet rule, you can avoid predicting impossible organic chemical reactions that don’t actually occur. You will also be able to understand the stability of the molecule.

Lewis structures are often used to explain the octet rule. The Lewis structure describes the number of electrons in the bonds between molecules.

How does a molecule make a bond? The main idea about this is that two electrons make a covalent bond.

Each atom possesses electrons. They are as follows.

When these atoms combine with each other, they donate one electron each. In the figure, it looks like the following. 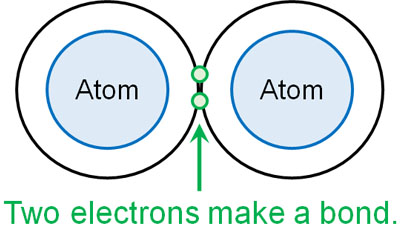 In any case, consider that there are two electrons per bond.

How to Write the Lewis Structure: Use It in Conjunction with the Kekule structure

How is the state of molecular bonding described? In organic chemistry, the Kekule structure is used in most cases. In both high school and college chemistry, the following structural formula is frequently used.

In both organic and inorganic chemistry, the Lewis structure is frequently used. It’s not difficult to write, but you must understand the concepts.

The octet rule itself is very simple. It is as follows.

And even if they are not atoms in period 2, they basically satisfy the octet rule. When halogens such as chlorine and bromine atoms bond to form molecules, it is common for them to have eight electrons.

Of course, for hydrogen, there are no eight electrons in the molecule. By donating one electron each, the hydrogen atom has the same number of electrons as helium. In other words, it is stable with two outermost shell electrons.

By Having the Same Electron Configuration as the Noble Gas, It Becomes Stable

Why does the octet rule draw electrons so that the outermost electrons are eight? This is because the electron configuration is the same as that of noble gases.

Stability and Instability in Terms of Ions and Carbocation

The octet rule is also known as the eight-electron rule. This is because there are eight valence electrons.

If we understand the octet rule, we can write the structure of ions. For example, when water and ammonia become ions, they look like this.

In acidic water, H3O+ is formed. And when ammonia is dissolved in water to form ions, it becomes NH4+. Even in the ionic state, the molecule satisfies the octet rule.

Normally, an oxygen atom has six valence electrons, so it makes two bonds and has two unshared electron pairs. However, when water is present as an ion (acid), as in the case of hydronium (H3O+), the oxygen atom makes three bonds and has one lone pair.

Also, the nitrogen atom has five valence electrons. Therefore, it makes three bonds and has one unshared electron pair. But in the case of ions, it makes four bonds and has no lone pair. All structures have eight outermost electrons, which satisfies the octet rule.

On the other hand, what happens if the octet rule is not satisfied? In this case, the substance would be very unstable. A carbocation is often used as an example.

A carbocation is a substance that has a positive charge on carbon. If we write carbocation in the Kekule structure and Lewis structure, we get the following. 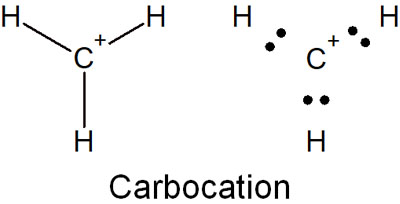 Thus, there are not eight electrons in the outermost shell. Since the octet rule is not satisfied, the carbocation is a very unstable molecule.

Therefore, even if a carbocation is produced, it is a high-energy molecule and will immediately undergo a chemical reaction to combine with other molecules. The molecules react chemically to satisfy the octet rule, and then try to reach a stable state.

For example, the ammonium ion (NH4+), as mentioned earlier, satisfies the octet rule and cannot make any more bonds. Therefore, the following reactions will not occur.

In this case, the product has five bonds to the nitrogen atom. If we focus on nitrogen, it will have 10 electrons. We should not predict this reaction because it does not satisfy the octet rule.

Rather, the correct answer is as follows.

The Exceptions that Do Not Satisfy the Octet Rule Are Boron, Phosphorus, and Sulfur

In some cases, however, a molecule can exist as a stable molecule even though it does not satisfy the octet rule.

However, there are cases of atoms in period 2 that do not satisfy the octet rule. A typical example is the boron atom (B). Boron has three valence electrons. Since boron atoms can only share three electrons, they form three bonds. For example, a borane (BH3) would look like this.

The following atoms in the first half of the periodic table of elements do not follow the octet rule.

Understand that beryllium (Be), boron (B) and aluminum (Al) are exceptions that do not satisfy the octet rule.

There are many exceptions to the octet rule. In particular, atoms in the first half of the elemental or after period 3 do not necessarily have to satisfy the octet rule.

The octet rule is only an empirical rule. Therefore, there are numerous exceptions. As mentioned above, carbon, nitrogen, oxygen, and fluorine atoms follow the octet rule. However, it is important to understand that there are a great many exceptions to the octet rule for other atoms that do not satisfy it.

In both organic and inorganic chemistry, the octet rule is frequently used for carbon atoms, nitrogen atoms, and oxygen atoms. Therefore, it is very important to understand the octet rule. However, for atoms other than these, there will be many exceptions to the octet rule.

Learn the Lewis Structure and Understand the Octet Rule

A very important element in chemistry is the electron. How electrons move can predict how molecules are bound together.

In addition, the Lewis structure should be written in a way that satisfies the octet rule. The important atoms in chemistry are carbon, nitrogen, oxygen and halogens, and these atoms make bonds to satisfy the octet rule.

But there are many exceptions to the octet rule, not only hydrogen and carbocations, but also boron (B), beryllium (Be), aluminum (Al), phosphorus (P), and sulfur (S). It is important to understand that it is the atoms in the second half of the period 2 elements that apply, and to use the octet rule.