Interactions are different from molecules bonding together to form covalent bonds. If a new bond is created by an organic chemical reaction, a new molecule is created. This bond is a covalent bond. Instead, interaction is that molecules try to attract each other and stick together, while maintaining their original structure.

Polarization Caused by Differences in Electronegativity

Broadly speaking, non-covalent bonds are intermolecular forces. Although the molecules are independent of each other, they are still attached to each other by other forces, without forming a strong covalent bond. Therefore, when energy is applied from outside, the attached molecules detach.

For example, oxygen, nitrogen, and halogen atoms are known as atoms with strong electronegativity. When these atoms are bound to carbon, the same molecule can be divided into positive and negative charges.

Examples of polarization are known to include water, ammonia, and hydrogen chloride (HCl).

The greater the polarization due to differences in electronegativity, the stronger the polarity. As a result, the dipole moment becomes larger.

In a dipole moment, we write a vector from negative to positive charge. There is no need to think too much about the meaning of the arrows. The point is to understand that the dipole moment describes how large or small the polarization is.

For reference, in organic chemistry, it is important to understand the movement of electrons. Starting from an atom with a negative charge, it attacks other molecules and causes an organic chemical reaction.

In such cases, the attraction of these charges to each other due to polarization is called dipole interaction.

When the dipoles are attracted to each other by the charge of the ions, this is called ion-dipole interaction. When dissolved in a solution, compounds that exist as ions will attract dipoles.

What happens when a polar molecule is placed near a neutral molecule? Due to the effect of the dipole, the neutral molecule will have an intramolecular charge bias. In other words, a dipole is created.

In polarized molecules, even neutral molecules will attract each other by inducing the induced dipole.

It may seem odd that non-polar molecules can interact with each other. However, even in the same molecule, the electrons do not stay in one place, they exist in various places in the molecule.

So, let’s try to capture a single moment in time. Just like taking a picture of a moment in time, if you capture a specific moment in time, you can discover the bias of electrons in a molecule. As a result of this instantaneous electron bias, even neutral molecules become momentarily polarized and have a dipole.

These instantaneous dipoles affect other nonpolar molecules, causing induced dipoles. As a result, even if only neutral molecules exist in space, they will interact with each other. This is called the London dispersion forces.

Once you learn about these polarization and dipole moments, you will be able to understand hydrogen bonds. A hydrogen bond is literally a bond that attracts and bonds with each other by interacting with hydrogen. While not as strong as a covalent bond, a hydrogen bond produces a strong force.

Specifically, when hydrogen atoms are bonded to oxygen (O), nitrogen (N), and fluorine (F) atoms, the polarization is very large. As a result, the dipoles created in the molecule strongly attract each other, and a strong bond is formed through the dipole-dipole interaction.

Although it is a bond between dipoles, hydrogen bonding is a strongly attractive interaction between hydrogen atoms and atoms with high electronegativity.

Proteins and DNA Are Hydrogen-Bonded

For example, there are many proteins in our bodies. Why do proteins have a particular shape? This is because of the hydrogen bonds involved. Proteins are formed when many amino acids are combined together. A protein can be described as a single long chain of amino acids.

However, if they are the same protein (same sequence of amino acids), the proteins will all have the same structure by folding. The reason for this is that hydrogen bonds interact and attract each other inside the protein. 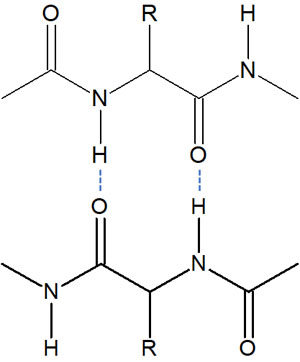 The same can be said for DNA, which is known to be formed by two base pairs. These are connected by hydrogen bonds, resulting in the double-helix structure of DNA.

Understanding hydrogen bonding is essential, not only for bonding in molecules and organic chemical reactions but also for understanding what happens in living organisms.

Compared to the dipole interactions and hydrogen bonds we have described, the van der Waals force is weaker in its attraction to each other.

We have explained that the occurrence of polarization leads to dipole interactions and hydrogen bonds. However, even neutral molecules have the ability to attract each other. This is the van der Waals force as mentioned above. As already explained, most of the forces that attract nonpolar molecules to each other are due to the London dispersion forces.

London dispersion forces produce induced dipoles, as a result of which neutral molecules are attracted to each other as van der Waals forces.

Van der Waals forces exist in all substances. This means that all molecules, even nonpolar ones, will attract each other.

So, the closer the molecules are to each other, the stronger the force of the Van der Waals force becomes? Actually, the closer they are, the more repulsive force is applied. 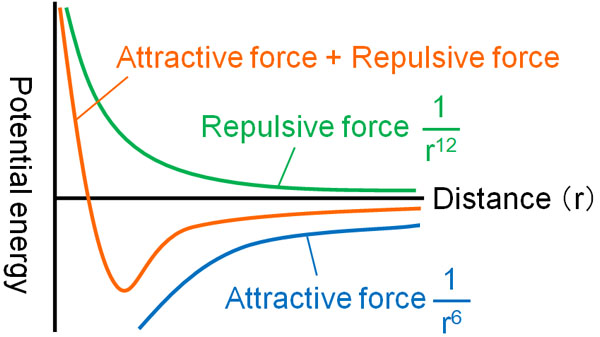 Increase in Entropy Due to Hydrophobic Interactions (Hydrophobic Effect)

The most familiar liquid in our lives is water. Water and oil do not mix with each other because they are completely different in nature. If there are two oils, they will stick to each other to avoid the water.

If left unchecked, the progression to a messy state is called entropy increase. If you neglect your garden, weeds will grow, and it will become rough. If you don’t keep things tidy, your room will become cluttered. According to the laws of nature, everything moves to become cluttered.

This is the same with oil. When the oil is in water, water will be present around the oil. But what if the oils stick together? If we focus on the water that was around the oil (hydrophobic molecules), the number of water molecules that can move freely will increase.

Micelle Formation Is an Application of Hydrophobic Interactions

When you study chemistry, you will study micelles. Micelles are compounds that have hydrophilic and hydrophobic parts in the same molecule. It is a so-called surfactant. As a familiar example, detergent is a surfactant. Detergents make micelles.

When a surfactant is placed in water, the hydrophilic part of the surfactant sticks to the water. It interacts positively with water through hydrogen bonding.

On the other hand, the hydrophobic group tries to avoid contact with water as much as possible. This is the so-called hydrophobic interaction, which reduces the contact area with water. The hydrophobic parts also attract each other by van der Waals force.

When micelles are formed in water by the surfactant, the oil (sebum and other dirt) is taken up by the hydrophobic part of the micelles. As a result, the micelles can be used as a detergent to remove grease and dirt. The most obvious application of micelles is in the field of detergents, but micelles are also used in many other fields such as medicine and food.

Molecules Are Attracted to Each Other Due to Intermolecular Forces

There are several types of bonds between molecules, including covalent bonds and ionic bonds (Coulomb forces).

Once you understand molecular polarization, you can understand why dipole interactions, hydrogen bonds, and van der Waals forces occur. Although hydrophobic interactions are a slightly different concept, it is essential when learning about molecular interactions.

Learn about these types and the differences between them, and make sure you understand the effects of intermolecular forces.