There are various methods of analyzing compounds. One of these analysis methods is infrared spectroscopy. This analysis method is used to analyze organic compounds to determine what kind of functional groups (substituents) are included in the compounds.

However, among analysis methods, IR spectra (infrared absorption spectra) have few advantages and many disadvantages in terms of structural analysis. It is not often used in structure determination.

On the other hand, IR spectra are meaningful if you want to measure a known substance. When you want to know if a known target compound is present, infrared spectroscopy (infrared absorption spectroscopy) is useful.

Understand the Theory and Method of the IR Spectrum

When you synthesize an organic compound or extract a new unknown substance, you have to determine the structure of the compound. For example, when a new compound is synthesized, it is unclear whether the desired synthetic compound has been obtained. So we analyze the compound.

It is also common to extract substances and separate multiple compounds into a single substance. In this case, it is necessary to confirm the structural formula of which compound is the target compound.

In many cases, the structural formulae are determined by analytical methods such as NMR (Nuclear Magnetic Resonance) and MS (Mass Spectrometry). These methods clearly distinguish the peaks and are used by many chemists in structure determination.

On the other hand, as mentioned above, infrared spectroscopy is rarely used because it has few advantages and many disadvantages in structural analysis. The reason for this is that the IR spectrum (infrared absorption spectrum) does not have clear peaks. For example, the following spectral peaks can be observed.

There is very little information to be gained by looking at these peaks.

The IR spectrum is said that it can reveal the presence or absence of a functional group. However, it is not possible to determine from the IR absorption spectrum whether there are only one or multiple functional groups of the target compound. With NMR and MS, these can be determined in detail. But IR spectroscopy cannot.

Even if you look at the peaks in the IR spectrum (infrared absorption spectrum), you can only get a rough idea of the structural formula. It is impossible to deduce the structural formula from infrared spectroscopy alone. Due to the disadvantage that only rough data can be obtained, it is not important as an analytical method.

Molecules are formed when atoms are connected to each other. Molecule bonds are not tightly connected. Like a spring, they are able to stretch and contract.

Molecules are vibrating. For example, a water molecule has the following bond stretching and contracting. 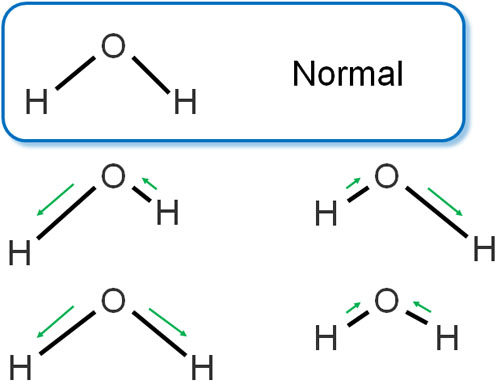 Understand that the bonds between molecules can stretch and contract, just like a spring. This is called stretching vibration.

And because they are springs, they don’t just stretch and contract. The bond angle can bend and be different from the normal angle. 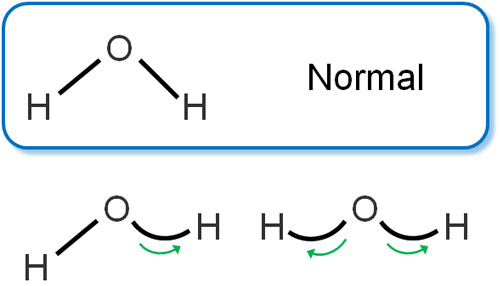 When the bond vibrates in this way, the bond angle changes, and this is called deformation vibration.

So why do these molecular vibrations occur? The peaks observed by stretching and bending vibrations are called vibration spectra. The vibrational spectrum is generated when a molecule absorbs infrared radiation.

Since the bonds between molecules are the same as springs, the peaks observed by IR spectroscopy differ depending on the type of bond.

For example, there are two types of bonds: double and triple bonds. When comparing a double bonded alkene (-C=C-) and a triple bonded alkyne (-C≡C-), which one has more energy?

Because of the increase in the number of bonds, we can expect alkynes (triple bond) to have a stronger bond as a spring. In other words, alkynes have a higher frequency.

Symmetric Molecules Such As Oxygen and Nitrogen Are Not Observed: Water and Carbon Dioxide Are Observed

Oxygen (O2) and nitrogen (N2) are known to be symmetric molecules. Because of their symmetry, these molecules cannot be observed by infrared analysis.

-The Two Bonds Stretch and Contract at the Same Time

The case of two bonds stretching and contracting at the same time is symmetrical. In other words, the IR spectrum is not observed.

On the other hand, the pattern of two bonds alternately stretching and contracting is not symmetrical. When irradiated with infrared light, a spectrum peak is observed. The reason there is an IR spectrum with water and carbon dioxide is that these molecules vibrate and absorb the infrared.

Carbon dioxide is known as a greenhouse gas and is said to be the cause of global warming. This is because carbon dioxide absorbs infrared radiation.

Understanding the nature of infrared light and the principle of molecular vibration helps us to understand why carbon dioxide is a greenhouse gas rather than oxygen or nitrogen.

What can we learn from the use of IR spectroscopy? As mentioned before, what we can read from the peak information in the IR spectrum is the presence or absence of a functional group.

Depending on the functional group (substituent), the peak of the spectrum will vary. The IR spectra are measured between 400 and 4000 cm-1, with higher numbers indicating higher energies.

The following peaks are observed in order from the higher wavenumber side.

Strictly speaking, this figure is wrong. The locations of the observed peaks are completely different for stretching and bending vibrations.

However, there is no point in trying to remember where the peaks are observed at different energies. Infrared spectroscopy is an analytical technique that is not used in structure determination, so you only need to have an overview of how to view the peaks.

Try to have a rough understanding of how to read the spectrum to see at what energy the peaks are observed depending on the type of bond and functional group.

In the IR spectra, a stretching vibration peak is observed above 2500 cm-1 for the hydrogen-containing single bond. The following bond-related peaks can be found in this area

Among these hydrogen-containing bonds, the most important peak is above 3000 cm-1. In the infrared absorption spectrum, you should focus on the area around 3000 cm-1.

-The Peak of the Triple Bond

Alkynes (C≡C) and nitriles (C≡N) have a triple bond, so peaks can be observed in this area.

-The Peak of the Double Bond

If the compound has a double bond, the IR spectrum appears between 1500 and 2000 cm-1. The following functional groups fall into this category.

In the case of structures such as alkenes (C=C) and carbonyl groups (C=O), there are peaks in the IR spectrum.

Every molecule has a single bond. As mentioned above, symmetric molecules such as oxygen, nitrogen and hydrogen do not absorb infrared light. This means that the infrared absorption spectrum cannot be observed.

On the other hand, many other substances absorb infrared light and show peaks in the infrared absorption spectrum. The peaks of these single bonds can be seen at 500-1500 cm-1.

If these bonds are present, peaks will be observed. Since most compounds have many single bonds, there will always be so many peaks in this area.

We Can Test for the Presence of Carbonyl Groups, Hydroxy Groups

When do we use infrared spectroscopy? When you want to know the structure of a compound, you can use it to check for the presence of carbonyl groups (C=O) and hydroxy groups (-OH).

When using IR spectra for an unknown compound, recognize that they are used to confirm that the compound has a carbonyl group (C=O).

The carbonyl group is based on the peak appearance at 1700 cm-1. However, even for the same C=O, an amide (-CO-NH-) shows a spectrum at around 1650 cm-1. In the case of amide, there are two peaks instead of one.

If there are two hydrogen atoms in the nitrogen, as in -NH2, two peaks appear around 3300 cm-1.

On the other hand, with a structural formula like R2-NH, a single peak is observed. In contrast, no peak appears in R3-N.

Most substances have a single bond. As mentioned above, the single bond has a peak between 500 and 1500 cm-1. In this area, all the peaks due to single bonds are mixed together and become quite complex peaks. Also, the shape of the peaks changes even if the structural formula is slightly different.

For this reason, in the IR spectrum, the area below 1300 cm-1 is called the fingerprint region.

We humans have a unique fingerprint. Since the shape of fingerprints varies from person to person, fingerprints are often examined in the search for a criminal. Just like fingerprints, each compound has its own unique peak shape. For known compounds, the fingerprint region can be checked to determine if they are the same substance.

For example, when investigating a particular drug, if the shape of the fingerprint region in an infrared absorption spectrum matches that of a known compound, we can assume that it is the same compound.

For all compounds, the shape of the fingerprint region is complex. Although it is impossible to measure high molecular weight compounds, IR spectra are useful for small molecule compounds. If you want to determine whether a substance is the same as a known compound, IR spectroscopy is useful.

There are many times when we need to analyze a compound to find out what kind of substance it is that we want to investigate. In this case, the IR spectrum can be used to examine the functional group.

However, in practice, the only thing that can be examined is whether or not a carbonyl group is present in the structural formula. Even if we try to investigate functional groups, there is little information available. This is a disadvantage of infrared analysis, and the reason why it is rarely used in structure determination.

Try to understand these principles and properties. Although less important than other analytical methods, you can use IR spectra if you have a situation where you need them.