In mathematics, we study probability. Probability is so familiar in our lives and all statistics are based on probability.

What are the probabilities when we toss two or more coins or dice? We will explain the basics of probability as taught in mathematics.

So how do we get the probability? In the case of dice, there are numbers from 1 to 6. In other words, there are six different ways to get the number. Out of the six possible ways, only one will result in the number 4. Therefore, the probability is $\displaystyle\frac{1}{6}$.

For example, what is the probability of getting an even number on the dice? Even and odd numbers are frequently asked in probability, so we need to understand how to solve them.

We can use the same method to come up with probabilities for odd numbers. When calculating probabilities in mathematics, try to think about how many ways there are in total and how many times the particular event will occur. 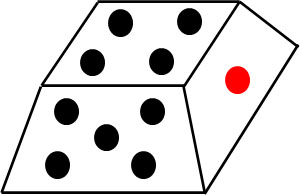 The calculation of probability requires the assumption that the probability of occurrence is the same for all events. This is equally possible.

For example, when betting, in many cases, the challenger loses. One reason for this is that cheating takes place. In betting, there are few cases that are equally possible. If it is not equally possible, we cannot calculate the probability.

Calculating the Probability of the Front and Back of Two Coins

Let’s actually calculate the probability. In calculating probability, we will consider a situation in which two coins are tossed. When we learn the basics of probability in mathematics, we often use coins as an example to learn probability.

A coin has two sides; heads and tails. The probability of tossing a coin and getting heads or tails is $\displaystyle\frac{1}{2}$. So what is the probability if we toss two coins?

When calculating the probability, if you think intuitively, you will get an incorrect answer with a high possibility. Therefore, you have to understand the correct way to get the probability. For example, what is the probability that the two coins will both be heads? Those who get it wrong will answer $\displaystyle\frac{1}{3}$. This is because we think there are the following patterns.

So, let’s think more precisely. For example, suppose we have the following two coins (5 and 10). 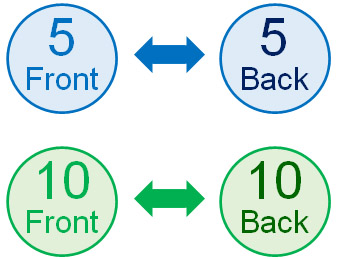 If you toss two coins, you can understand that there are four patterns.

There is more than one front-back pair. There are two types: (front, back) and (back, front). Therefore, the total number of events to occur is four. Therefore, the probability of tossing two coins and having them both be heads is $\displaystyle\frac{1}{4}$.

Find the Probability by Tree Diagram 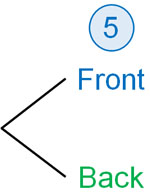 Then toss the other coin. As a result, we can see that there are four ways as follows. 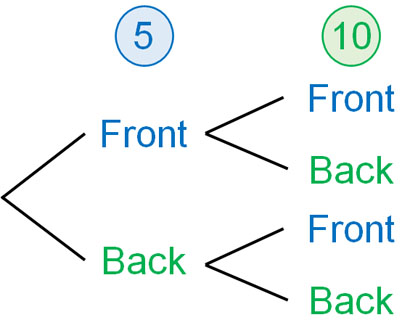 In other words, a tree diagram is a way to write out all the different types of events. Whether you toss a coin at the same time or separately, the result is the same. So, by using a tree diagram, you can check all the possible events.

Not Drawing a Tree Diagram Is Likely to Be Incorrect

As mentioned above, many people make miscalculations when they calculate probability intuitively. In other words, if you do not draw a tree diagram, you will make many calculation mistakes.

The reason why miscalculations occur when tossing two coins is that many people think of situations in which they toss the same type of coin. What is the probability that both coins will be on the front side when tossing the same two coins, as shown below?

In this case, since the coins are the same, we need to think of the tree diagram with different criteria. So, let’s separate the first coin and the second coin. Although we are actually tossing two coins at the same time, we assume that they are tossed separately for the purpose of drawing the tree diagram. Then we have the following. 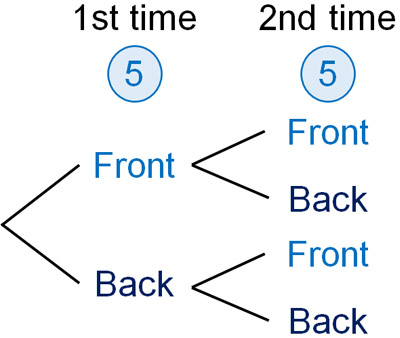 When drawing a tree diagram, assume that events occur separately rather than simultaneously. That way, you can draw all the outcomes.

Then, check the number of times the event is happening from the tree diagram. For example, when tossing two coins, it would be as follows.

By drawing a tree diagram, we can find out the number of times of the total event. Not only that, we can count how many times a particular event has occurred. When learning the basics of probability in mathematics, be sure to draw a tree diagram.

The Probability of Rolling Two Dice

In fact, we roll the dice at the same time. However, as explained so far, we make a tree diagram assuming that the dice are rolled separately. In that case, we get the following.

However, in the case of dice, the tree diagram is more complicated and difficult to distinguish. Also, it takes time to create a tree diagram. So, when rolling two dice at the same time, it is common in mathematics to create the following table. 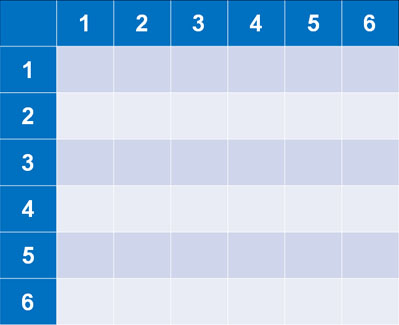 It is not available if we roll three dice. However, this table is useful in the case of rolling two dice. 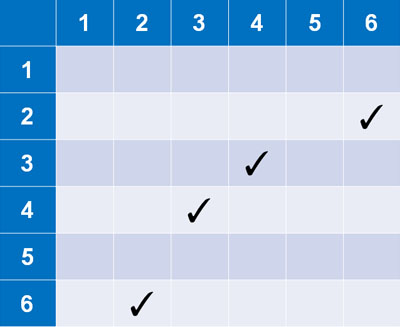 In the table, there are four ways in which the result will be 12. Since the total number of events is 36, the probability of rolling two dice and getting a result of 12 is $\displaystyle\frac{4}{36}$. Also, by reducing the fraction, the answer becomes $\displaystyle\frac{1}{9}$.

Calculate the Probability of Not Occurring

For example, suppose there is a lottery that has a 20% chance of winning. In this case, what is the probability that you will not win the lottery? The calculation method is as follows.

100% = 1. Once we understand these facts, we can determine the probability of not happening by the following formula.

Two dice are rolled. After squaring the numbers on the dice and adding the two numbers, find the probability that the number of dice is less than or equal to 30.

In dice problems, be sure to make a table. After making the table, square each number. Then add them up and check the part that is less than or equal to 30. It will look like this. 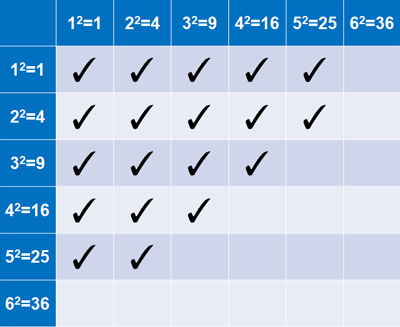 The total number of events is 36. Also, the number of checks is 19. Therefore, we have the following probability.

Then, put all the cards into each envelope. What is the probability that the numbers on the envelopes and the cards are all different?

What if we put card 1 in envelope 1? In this case, we can put either card 2 or 3 in envelope 2. Then, we would put the remaining card in envelope 3. 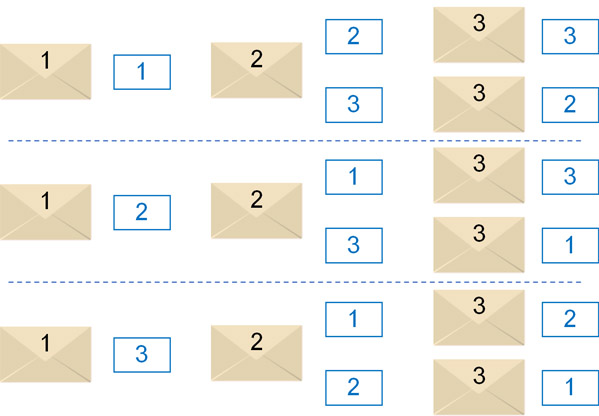 Thus, we can see that there are six ways in total. In which of these cases are the numbers on the envelope and the card all different? If you count them one by one, there are two such events.

Therefore, the probability is as follows.

Learn the Basics of Probability and Do the Calculations

When learning the basics of probability in mathematics, you don’t learn difficult formulas from the beginning. By using a tree diagram, we can figure out what patterns are there, one by one. Therefore, you cannot get an answer without drawing a diagram.

If you solve a problem without a tree diagram, you are almost certain to get an incorrect answer. This is because, as explained in the coin example, without a diagram, mistakes will occur frequently.

Probability problems are more challenging because all patterns need to be shown. Not only that, you have to count how many of the target events have occurred.