In organic chemistry, we deal with a variety of molecules. One of the most important structures is conjugation. When double bonds (unsaturated bonds) and single bonds alternate, they are called conjugates.

One of the most famous reactions in 1,4 addition is Michael addition. For compounds with electron-withdrawing groups, the effect of 1,4 addition is especially important.

So we will explain the 1,2 and 1,4 addition to conjugated dienes and check the nature of the Michael addition for compounds with electron-withdrawing groups.

Two double bonds in a molecule do not necessarily make it a conjugated diene. The double bond and the single bond must alternate.

For example, the following compounds are not conjugated dienes.

So, among compounds with double bonds, why do we have to learn about molecules with conjugated structures separately? It’s because we can write resonance structures.

Even if an alkene has double bonds, if they are not conjugated, the double bonds have only general properties. On the other hand, if there is a conjugated structure, we can write resonance structures as follows.

In conjugated structures, the π-electrons are dispersed to various places due to resonance, which makes the movement of electrons more complicated. This is a characteristic of compounds with a conjugated system.

Why is the conjugated system of molecules so important? It’s because the movement of the π-electrons causes complex chemical reactions.

For example, when 1,3-butadiene reacts with HBr (hydrogen bromide), both 1,2 and 1,4 addition reactions occur, as shown below.

1,2 Addition (direct addition) is a typical addition reaction. In contrast, why does 1,4 addition (conjugate addition) occur? The reason is that the presence of a conjugated structure causes the molecule to resonate.

The reason for conjugate addition can be understood by checking the reaction mechanism of the addition reaction to conjugated dienes.

Initially, in the addition reaction, the π-electrons of the double bond attack the hydrogen atoms of the hydrogen halide. The result is the formation of a carbocation; in the case of 1,3-butadiene, the hydrogen atom is attached to the terminal carbon. This is because aryl cations are more stable than primary carbocations when considering the stability of carbocations.

In the case of 1,2 addition (direct addition), the bromine ion attacks after the formation of the carbocation. As a result, the addition reaction is completed by the following reaction mechanism.

In contrast, in 1,4 addition (conjugate addition), after a hydrogen atom is bonded, the location of the double bond changes due to resonance. The bromine ion then attacks.

The reaction mechanism is as follows.

Because of the double bond next to the carbocation, electrons can be transferred. As a result, 1,4 addition can occur. 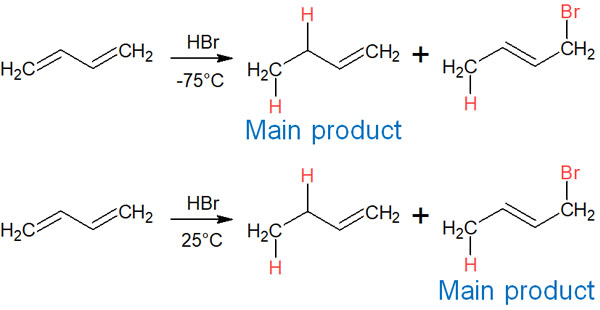 The 1,2 addition in conjugated dienes is due to kinetic control. The kinetic control is based on the fact that the reaction takes place preferentially at low temperatures in a short time.

When a proton is added to the double bond, an aryl cation is formed. When the bromine ion attacks the carbocation, it is closer to the carbon atom in the second position than to the carbon atom in the fourth position. Therefore, if the temperature is lowered, thus lowering the movement of the molecule and the activation energy required for the reaction, the 1,2 addition will proceed preferentially.

This is the reason why 1,2 addition is kinetic control, and the reaction proceeds preferentially at low-temperature conditions.

If the reaction temperature is high, stable compounds will be preferentially formed, even if the activation energy is somewhat high. For the addition reaction to a conjugated diene, when comparing the compounds formed, the stability differs as follows.

Why is there such a difference in stability between compounds? The allyl cation has a double bond. In molecules with a double bond, polysubstituted alkenes are known to be more stable.

This is explained by the phenomenon of hyperconjugation. The double bond has π electrons in it. Therefore, if there is a C-H bond next to it, the π electrons of the double bond and the C-H bond are parallel to each other. As a result, the structure is stabilized by weakly sharing electrons. 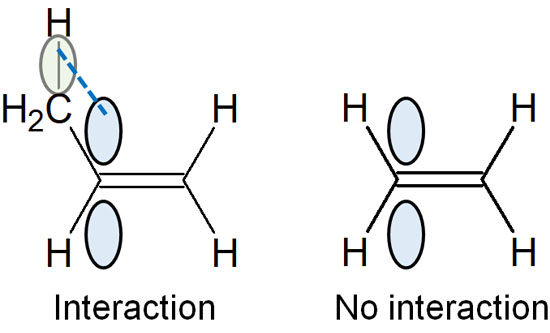 The way of thinking about which reaction occurs preferentially is the same as that of the conjugated dienes mentioned earlier. Due to the influence of the oxygen atom, the carbonyl carbon is positively polarized. Therefore, the activation energy is low, and 1,2 addition proceeds by kinetic control.

However, there is a large steric hindrance in attacking the carbonyl carbon. Nucleophilic attack on the double bond and the 1,4 addition provides a more stable compound. In other words, the Michael addition proceeds by thermodynamic control.

In addition to alkenes, Michael addition can also occur when an electron-withdrawing group is present on an alkyne (triple bond).

Due to the equilibrium reaction caused by steric hindrance, the reaction of enolates with α,β-unsaturated carbonyl compounds proceeds under thermodynamic control. Therefore, using enolates, the following compounds can be obtained by conjugate addition.

One of the important questions in organic chemistry is whether 1,2 addition or 1,4 addition (Michael addition) occurs.

In a nucleophilic attack on an α,β-unsaturated carbonyl compound, both 1,2 and 1,4 addition can occur. However, depending on the reaction conditions, which of the two is preferred will vary. Therefore, it is necessary to learn when Michael addition is preferred.

Conditions and Reaction Mechanism for 1,2 and 1,4 Addition

When double bonds exist alternately, it is called a conjugated structure. In these compounds, a special reaction occurs: not only 1,2 addition, but also 1,4 addition occurs in conjugated dienes.

Some molecules have multiple reaction sites. One of them is a compound with a conjugated structure. Let’s understand how 1,2 or 1,4 addition occurs.