However, whether it is an acid or a base depends on the conditions. Even if a compound is an acid, it can often become a base under other conditions. A substance that is acidic in solution is not necessarily an acid. Even substances that are generally considered to be acids can often be bases.

High School Chemistry Is Defined by Arrhenius and Brønsted-Lowry

However, this definition is useless in chemistry. In the first place, chemical reactions do not proceed only in aqueous solutions.

In high school chemistry, all we learned was the Brønsted-Lowry definition. Even when we learn about Brønsted acids and Brønsted bases, we don’t learn about the details of conjugate acids, conjugate bases, and acid strength indicators. Therefore, it is necessary to have a deep understanding of why acids and bases are generated.

Also, to understand Lewis acids and Lewis bases, it is common to learn about Brønsted acids and Brønsted bases first, so let’s see the details.

In Acids and Bases, There Are Always Conjugate Acid and Conjugate Base

There are many molecules known as acids and bases. For example, ammonia is a base. This is because it receives H+. Water, on the other hand, is an acid because it gives H+.

On the other hand, the molecule that is formed after the base receives H+ is called a conjugate acid. The name conjugate acid comes from the fact that it gains a positive charge and gives H+ in the reverse reaction.

For example, water is both an acid and a base. If water reacts with hydrochloric acid (HCl), it acts as a Brønsted base. On the other hand, if it reacts with ammonia, water gives H+ and becomes an acid.

Of course, many molecules, not just water, can become acids or bases.

For example, is an amine an acidic substance or a basic substance? Generally speaking, compounds with amino groups are considered to be basic substances. However, this is because we use water as a standard. Depending on the conditions, amines can be acids.

When we understand this fact, we realize that there are no absolute acidic or basic substances. This is because acidity or basicity depends on what kind of reagent you use.

How do we express the strength of an acid? The pKa value is a measure of acidity.

However, in the equilibrium constant (K), water (H2O) is a solvent and is present in excess. And even if it reacts with hydrochloric acid, the amount of water will change only slightly because of the large amount of water present as a solvent. Therefore, we can ignore [H2O] in the above equation.

Therefore, the equilibrium constant can be written as follows, omitting [H2O].

However, it is difficult to understand the equilibrium constant as it is. So, we can apply pKa to the following equation using the log.

For reference, the pKa is as follows for each molecule.

The More Stable the Conjugate Base Is, the More Acidic It Is (the Less Basicity)

When the conjugate base state is stable, the compound actively tries to provide H+. It wants to provide the H+ as soon as possible and become negatively charged.

How Are Acidity and Basicity Determined?

In this regard, acidity and basicity are related to the following factors.

There are many other factors involved in acidity and basicity. However, the main factors are these.

When an atom of high electronegativity is bonded to a hydrogen atom, it causes the molecule to split into positive and negative charges. As a result, the molecule becomes polarized. Due to the high electronegativity, the higher the degree of polarization, the more the atoms attract electrons. This means that hydrogen atoms are more likely to be positively charged, resulting in a higher degree of acidity.

Compare, for example, the second-period elements. In this case, acidity is in the order of electronegativity.

-The Larger the Atom, the Higher the Acidity

However, acidity is not the only factor involved in electronegativity. The size of the atoms is also important. For example, halogens have the following pKa.

-The Structure Is Stabilized by Resonance of the Conjugate Base

Resonance also contributes greatly to acidity (or basicity). Resonance of the conjugate base stabilizes the structure by having electrons present in various locations. This is called the delocalization of electrons. For example, the resonance structure of p-nitrophenol can be written as follows.

-The More s Character the Hybrid orbital, the More Acidic It Is

Hybrid orbitals are related to acidity. There are two types of orbitals: s-orbital and p-orbital, and the higher the percentage of s-orbital, the more acidic they are.

For example, the order of acidity is as follows.

The Difference and Concept of Lewis Acids and Lewis Bases

So far, this is a detailed description of the definitions of acids and bases by Brønsted-Lowry. It is important in organic chemistry to understand when they become acids or bases.

However, in organic chemistry, even Brønsted-Lowry theory is not sufficient. The reason is simple: there are many synthetic reactions that do not involve H+. Therefore, we have to understand a different concept for acids and bases.

A Lewis acid is a Brønsted acid, and a Lewis base is also a Brønsted base. For example, the reaction is as follows.

How to Distinguish Between Electrophilic and Nucleophilic Reagents

The way to distinguish them is simple: when you draw an arrow in a chemical reaction, the molecule that accepts electrons is a Lewis acid. The more acidic a compound is, the more capable it is of accepting electrons.

When we understand this, we can consider compounds with empty orbitals to be acids, such as the following. 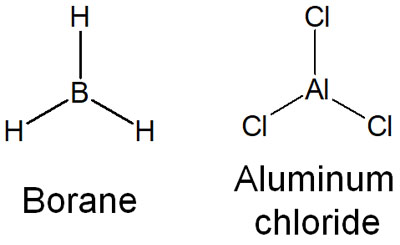 Why do boron and aluminum become Lewis acids? Because they have an unoccupied orbital that allows them to accept electrons. That’s why boron (borane: BH3) and aluminum (aluminum chloride: AlCl3) are known to be strong Lewis acid catalysts.

Compounds with unoccupied orbitals do not attack other molecules and make new bonds. Therefore, they can be distinguished as Lewis acids.

But without an unshared electron pair, they cannot be nucleophiles. Understand that in order to give electrons, the presence of electrons that are not involved in the bond is essential. This is how you should distinguish between Lewis acids (electrophilic reagents) and Lewis bases (nucleophilic reagents).

There Are Definitions, Types, and Characteristics of Acids and Bases

In organic chemistry, most reactions are carried out by acids and bases. All of these compounds have acidity and basicity, and by studying the conjugate acids and bases, we will be able to distinguish the difference in acidity (pKa).

Acids and bases by Brønsted-Lowry definition are relative. Depending on what reagent you mix with it, it will be acids in some conditions and bases in others. With acids and bases, you have to recognize this fact.

However, in chemical reactions, H+ doesn’t necessarily move. Therefore, it is not enough to think only in terms of Brønsted acids and Brønsted bases. So we have to learn the concept of Lewis acids and Lewis bases. You can distinguish between acids and bases depending on whether they receive or give electrons.