In organic chemistry, synthetic reactions are often carried out by acids and bases. The reaction of a Lewis acid and a Lewis base creates new bonds.

So when a compound reacts chemically, what kind of atoms bond with each other? In this regard, the HSAB theory (or HSAB principle) helps us to predict where compounds will react chemically. In the HSAB principle, acids and bases are described as hard acids and soft bases, and so on.

You don’t have to remember exactly which atoms are hard and which ones are soft because you can check the table. However, it is important to understand the concept of the HSAB theory to understand how a synthetic reaction proceeds.

Judging Atoms by Their Hardness and Softness

However, we don’t just consider the definition of Brønsted-Lowry in organic chemistry. This is because, in the reaction between acids and bases, the H+ (proton) does not necessarily move.

So, we think of using Lewis acids and Lewis bases. When a Lewis acid reacts with a Lewis base, the HSAB principle is a method for predicting the ease of reaction.

Why is it important to learn the HSAB principle? As mentioned above, the HSAB theory is the principle that can predict how chemical reactions will occur.

The HSAB theory is as follows.

Making strong bonds means that the reaction is more likely to proceed. For example, if you add a hard acid, the reaction will easily proceed with a hard base instead of a soft base. This feature is the HSAB theory, and it is responsible for the ease of reaction between molecules.

The Concept of Hard and Soft Atoms (Ions)

What does it mean for an atom to be hard or soft? There are several factors that contribute to this, especially the ease of polarization is important.

On the other hand, if the radius of an atom is large, the electrons are away from the nucleus. Therefore, they are less affected by the nucleus and are more easily polarized. 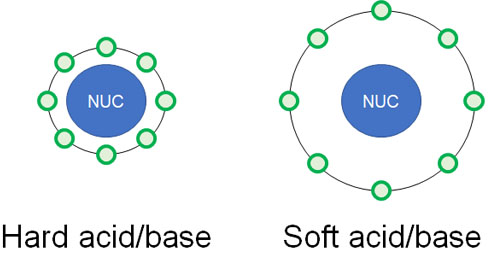 When compounds with positive or negative charges are nearby, the soft atoms are more likely to be polarized. There is this difference between hard and soft atoms.

How Do We Remember the HSAB Principle?

According to the HSAB principle, hard and soft ions can be classified as follows.

It doesn’t make sense to remember all of these lists exactly. You just need to learn how to remember them roughly and be able to distinguish them.

For example, H+, alkali metals, and alkaline earth metals at the top of the periodic table are hard acids. As for bases, F– and Cl– are also hard bases. But Br– is an intermediate base, and I– is a soft base. The ionic radius plays a major role in this.

Atoms with high electronegativity (F, O, N, etc.) are hard atoms. When bonded to these hard atoms, ions tend to be hard, such as NO3– and NH3–. On the other hand, if a molecule is bonded to carbon, it tends to become a softer ion.

Of course, it is often difficult to distinguish between these criteria alone; the HSAB theory is just a rule of thumb.

On the other hand, Fe2+ is an intermediate acid, even for the same iron ion. If the valence changes, the hardness and softness of the ion will be different.

On the other hand, in the case of a large atomic radius, synthetic reactions often proceed due to the overlap of molecular orbitals rather than chemical reactions depending on the degree of polarization. Molecular orbitals include HOMO (binding orbitals) and LUMO (anti-bonding orbitals), and electrons move through the orbitals in the molecule due to the influence of each other.

With a large atomic radius, it is more important for the molecular orbitals to overlap to form bonds than the effects of positive and negative charges. This is why softer acids and bases are more likely to react.

The HSAB Theory Is Useful for Predicting Organic Chemistry Reactions

However, in practice, the HSAB theory is used more often in organic chemistry than in inorganic chemistry. This is because we can predict the reactions that will occur depending on whether the reagents to be reacted are hard or soft. Therefore, we should try to distinguish between hard and soft for molecules.

Why is this the case? This can be explained by the HSAB principle. Sulfur atoms have a larger atomic radius than oxygen atoms. Iodine ions also have a large atomic radius. This is why soft acids and bases interact with orbitals and quickly react chemically to form new bonds.

Example of Reaction with Grignard Reagent Under HSAB Principle

Learning the HSAB principle also helps us to understand regioselectivity. In organic chemistry, it is very important to predict where a reagent will react.

In other words, a chemical reaction occurs when a hard acid reacts with a hard base. The reaction is caused by acids and bases. We can explain the 1,2 addition in Grignard reagents by the HSAB theory.

The difference between the 1,2 and 1,4 addition (Michael addition) in organometallic compounds is frequently used as an example of a reaction in the HSAB theory. Of course, for other organic reactions, the HSAB theory can also be used to predict the progress of the reaction.

One of these rules is the HSAB principle. There are different types of atoms and ions, such as hard and soft. For acids and bases, they have different properties.

We don’t have to remember all the hard and soft molecules for acids and bases. Just try to learn what properties make a compound hard (or soft).