The SN1 and SN2 reactions are synthetic reactions, called nucleophilic substitution reactions, in which the substituents are swapped.

However, the reaction mechanism differs depending on the type of compound to be reacted with. The easiness of the synthetic reaction to proceed is also different. Without learning these reaction mechanisms, you will not be able to obtain your desired compounds. The solvent used in the synthesis is also important.

In this section, we will explain the basic organic chemical reactions, SN1 and SN2 reactions, and how the synthetic reactions proceed according to the reaction mechanisms.

Nucleophile (Nu) Is a Substance with High Electron Density

Before learning about nucleophilic substitution reactions, we must understand what a nucleophile (Nu) is in the first place. In a nucleophile (or nucleophilic reagent), they all have a high electron density. As a result, they try to make new bonds by attacking other compounds.

So, when does a high electron density increase and act as a nucleophile? If the following conditions are met, it is likely to become a nucleophile.

Atoms with high electronegativity tend to attract many electrons and thus become electron-rich. In addition, the presence of unshared electron pairs makes it easier for lone electron pairs, which are not involved in bonding, to attack other molecules.

These are widely known to function as nucleophiles. In addition, they tend to become nucleophilic reagents when they are negatively charged, such as anions.

Nucleophilic Substitution Reaction with the Presence of a Leaving Group (L)

Molecules (or atoms) that are easily stabilized by receiving electrons tend to be the leaving groups. Typical leaving groups are halogens.

It’s hard to understand with symbols like Nu and L. In an actual synthetic reaction, it looks like the following.

In this way, the leaving group and the nucleophilic reagent are replaced. This is why it is called a substitution reaction. Although halogens can function as nucleophiles, they are frequently used as leaving groups.

Although the reaction mechanisms are different, both SN1 and SN2 reactions involve leaving groups.

The SN1 Reaction Is a Two-Step Reaction

You may be wondering why the bond breaks and leaves on its own, even though it is strongly bonded by a covalent bond. However, the leaving group will try to break the covalent bond and leave on its own.

For example, halogens are known for their strong electronegativity. As a result, they are polarized into positive and negative charges in the molecule. Because of the high polarization of the charge, the halogen wants to leave from molecule whenever it gets a chance. So, the leaving group leaves the molecule, and a carbocation is formed.

But the carbocation is an unstable intermediate, so the compound tries to maintain its molecular shape by re-capturing the separated halogen.

On the other hand, what if there is a nucleophile in the same solution? In this case, the nucleophilic reagent attacks the carbocation at the moment the leaving group leaves the molecule.

Because of the two reactions involved, the SN1 reaction is said to be a two-step reaction.

SN1 Reaction Occurs When the Carbocation Is Stable

The carbocation is stable in the following order.

The more alkyl chains that are attached to the carbocation, the more stable the intermediate is likely to be. In fact, it does not naturally give rise to a primary carbocation. On the other hand, a tertiary carbocation tends to be a stable structure.

The Rate of the SN1 Reaction Depends on a Single Molecule

What is the rate-determining step in the SN1 reaction? It is not the nucleophile that determines the reaction rate in the SN1. Rather, the rate-limiting step is the formation of the carbocation. 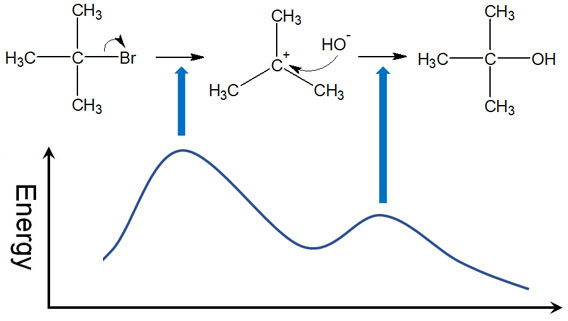 On the other hand, when the nucleophile is attacking, the energy of the transition state is low. Therefore, once the initial reaction is underway, the rest of the chemical reaction proceeds automatically. For this reason, the first step of the SN1 reaction is the rate-limiting step.

The ease of the SN1 reaction occurring is as follows.

Note that even with primary carbocations, allyl cations and benzyl cations exceptionally proceed with the SN1 reaction.

In an allyl and benzyl cation, there is a double bond next to it. This allows resonance structures to be written and stabilizes the structure of the cation. As a result, the SN1 reaction occurs.

In Stereochemistry, the SN1 Reaction Results in Racemic Mixture

In the stereochemistry of the SN1 reaction, racemization occurs. In other words, if we have to consider stereochemistry, we should understand that two substances are produced by the racemate.

After the carbocation is formed, the nucleophile can attack the chiral carbon atom from two directions, from above or below. The result is racemization.

Racemic isomers are important in stereochemistry. Understand that in the SN1 reaction, racemization causes the two products to mix together.

The SN2 reaction does not produce a carbocation. Instead, the nucleophile attacks from the opposite side, producing a sterically inverted compound after the transition state, as shown below.

Thus, the nucleophile attacks in such a way that it replaces the leaving group.

Tertiary Alkyl Groups Don’t Cause Reactions Due to Steric Hindrance

In other words, consider that the order of reactivity is the reverse of the SN1 reaction. Why does the SN2 reaction not occur with tertiary alkyl groups? Steric hindrance is involved in this.

For example, suppose that a nucleophilic substitution reaction is carried out for tert-butyl bromide. In this case, the SN2 reaction does not occur due to a steric hindrance. On the other hand, the SN2 reaction will occur with bromoethane.

If we draw a structural formula like this, we can understand why a nucleophile cannot attack from the opposite side in a tertiary alkyl group. In organic chemistry, it is necessary to consider steric hindrance.

Note that although tert-butyl bromide does not cause the SN2 reaction, it causes the SN1 reaction. This has been explained earlier.

-Cyclic Compounds Such as Cyclohexane Have Lower Reactivity

For reference, it is known that the reactivity of the SN2 reaction is slower in cyclic compounds such as cyclohexane than in other compounds. What is the reason for this? 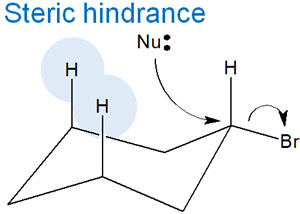 In organic chemistry, differences in reaction rates can often be explained by steric hindrances.

This is easy to understand because it is natural that the basicity becomes stronger with a negative charge. The energy diagram of the SN2 reaction is as follows. 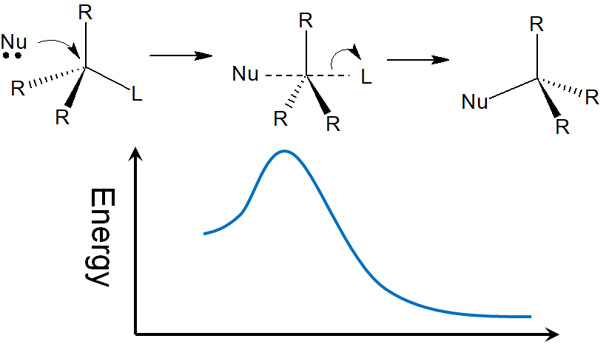 When energy is added, a transition state is created. In this case, both the nucleophile and the reactive compound are involved in the reactivity.

Williamson Ether Synthesis Is an SN2 Reaction with Halogen Substitution

It is important to understand that Williamson ether synthesis is, in essence, a method of synthesizing ethers through the SN2 reaction. Therefore, the content is very simple if you understand what we have been talking about. The oxygen atom of the alcohol attacks the carbon atom that the halogen is bonded to, and the ether is synthesized by the SN2 reaction.

The SN2 reaction is beneficial in all organic reactions, not just Williamson ether synthesis. In addition to alcohols, by using molecules with other functional groups, many types of molecules can be made. It is as follows.

Comparing the Difference Between the SN1 and SN2 Reactions

Let’s try to sort out what the differences are when comparing SN1 and SN2 reactions. They can be summarized as follows.

Also, depending on the alkyl chain attached, such as tertiary or secondary, whether the reaction is an SN1 reaction or an SN2 reaction will differ. It is as follows.

Depending on the substituents in the reaction compound, which reaction takes place will vary.

The stronger the acidity of a substance, the more likely it is to exist as an ion in solution. Therefore, the more acidic the compound is, the more stable it will be after leaving. The acidity of halogens, in order, is as follows.

Therefore, the leaving capacity in the nucleophilic substitution reaction is in the following order.

Differences in Stability Due to Solvent Effects

In the nucleophilic substitution reaction, the reactivity varies depending on the solvent used. This is called the solvent effect. The solvent effect differs between the SN1 and SN2 reactions; it is necessary to select the right solvent to use.

The three main solvents used in organic synthesis are as follows.

Let’s check what each solvent is.

When a hydrogen atom binds to an atom with a high degree of electronegativity, such as an oxygen atom, the hydrogen atom becomes positively charged. As a result, they can form hydrogen bonds. One of the strongest forms of polarization is hydrogen bonding.

Solvents that allow hydrogen bonding are polar protic solvents. In protic solvents, any ion with a positive or negative charge will be stable in the solution.

For nucleophiles and leaving groups, acidity and basicity are important for reactivity. Understand that polar protic solvents strongly stabilize ions.

Although there are no hydrogen bonds, these molecules are polarized by oxygen and nitrogen atoms. As a result, they weakly stabilize ions.

Therefore, consider that the use of aprotic solvents will stabilize the ions of the nucleophiles and leaving groups a bit.

-Non-polar Solvents Do Not Contribute to Stabilization

These non-polar solvents are not polarized, so they cannot stabilize either cations (positive charge) or anions (negative charge).

The Ease of SN1 and SN2 Reactions Occurs Vary with Solvents

Since the properties of solvents differ, the reactivity will change depending on the solvent used. For nucleophilic substitution reactions, let’s consider the following.

Why is there such a difference? Let’s start with the SN1 reaction.

The reactivity of the SN1 reaction depends only on the reaction compound. Also, the better the stability of the leaving group, the easier it is to produce carbocation and the higher the reaction rate. After the leaving group is released, a negative ion is produced. In order for this ion to be stabilized, the presence of a polarized solvent makes it more stable.

Also, the carbocation is positively charged, and the use of a polarized solvent stabilizes the cation. For this reason, the SN1 reaction can easily proceed in the following order.

In an energy diagram, it looks like the following.

The SN1 reaction is more likely to occur when polar protic solvents are used because the initial activation energy required to produce the intermediate is reduced.

-Solvent Effect in the SN2 Reaction

However, it is important to note that in the SN2 reaction, not only the compound undergoing nucleophilic attack but also the nucleophile plays a major role in the reaction rate. The use of protic or aprotic solvents stabilizes the nucleophile. In other words, their ability to attack the compound is weakened.

In the energy diagram, it looks like the following. 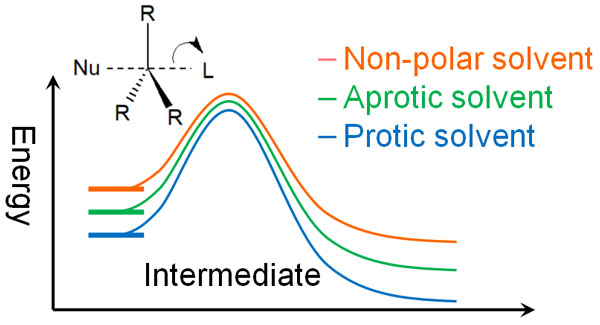 One of the most important chemical reactions in organic synthesis is the nucleophilic substitution reaction. It is a convenient synthetic reaction that it can be said that all organic chemists use the SN1 and SN2 reactions. By mixing a compound with a leaving group and a nucleophile, they react chemically.

Let’s distinguish between these and consider whether the SN1 or SN2 reaction will occur.

In addition, nucleophilic substitution reactions require you to predict the reactivity and the compounds to be formed, taking into account the stereochemistry. Be sure to understand these reaction mechanisms to synthesize organic compounds.