Decimals are taught in elementary school mathematics. After learning multiplication with decimals, you need to be able to do division.

When calculating decimals, a division is a bit more complicated. This is because it is not always divisible. You have to calculate until you can divide or use the remainder to get the answer. It is also common to move the decimal point.

When it comes to calculating decimals, addition, subtraction, and multiplication are easy. Division, on the other hand, requires a lot of understanding. In this section, we will explain how to do decimal division.

How to Divide Using Decimals and Integers: The Case of Divisible Numbers

Let’s start with the simple division of decimals. As long as the numbers are divisible, the calculations are not complicated. For example, how do you calculate the following?

When doing this calculation, create the following long division. 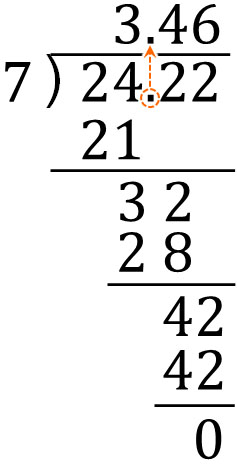 When doing division using decimals and integers, it is not difficult to calculate as long as the numbers are divisible. After dividing, add the decimal point in the same place.

In some calculation problems, the ones place of the answer may be zero. In this case, you should always write a zero in the ones place. The following is an example. 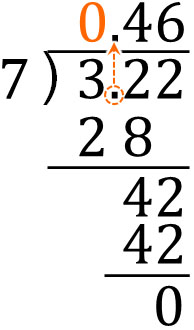 In calculating decimals, the number can be smaller than one. Understand that in the division of decimals, the ones place can be zero.

Division of Decimals Until Divisible

On the other hand, there are some problems that need to be calculated until a number is divisible. In this case, the calculation is done by adding zeros to the right of the decimal.

There are hidden zeros in decimals. For example, 1.4 can be written as 1.400. However, since there is an infinite number of zeros, we omit the zeros in decimals. In any case, it is important to understand that in decimals, there are many zeros to the right of the number.

Therefore, when calculating divisible decimals, add zeros to get the answer. For example, how do we calculate the following?

When doing this calculation, let’s change the value to 1.40 instead of 1.4. The result is as follows. 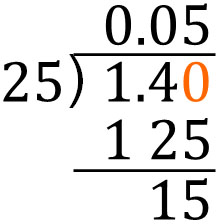 However, the calculation should not end here. From this point, we can do more division. So, let’s change 1.40 to 1.400 and do the next calculation. 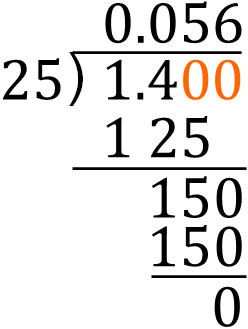 When the Divisor Is a Decimal, Move the Decimal Point to Perform the Division

So far, we have discussed division when the divisor is an integer. On the other hand, when a divisor is a decimal number, how do we calculate it?

The long division is as follows.

The divisor is 1.4. If we don’t change it to an integer, we will not be able to do the division. So, instead of 1.4, let’s make it 14. Move the decimal point one place to the right. 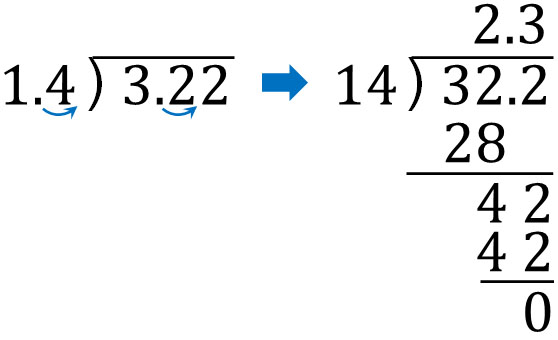 Understand how to move the decimal point and change a divisor to an integer.

There is a question that is asked by many people. Why is it okay to move the decimal point? The reason for this is that even if you change the position of the decimal point, the answer will be the same.

For example, the following will all give the same answer. 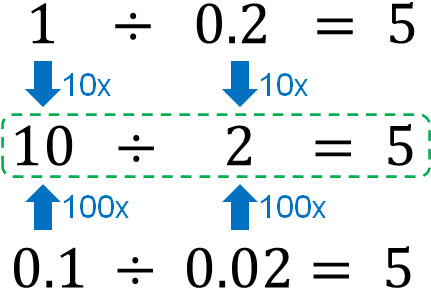 Division of Decimals and Integers with Remainders

So far, we have discussed division when the number is divisible. On the other hand, what should we do with numbers that are not divisible? When an integer is not divisible, we use the remainder. This is also true for decimal division.

For example, how do we calculate the following?

If you make a long division and calculate it, you will get the following. 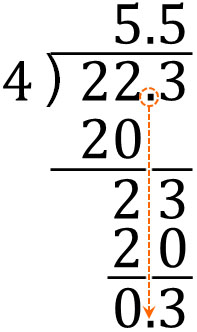 The method of division is the same as the one explained so far. The only difference is that the remainder is given. If you calculate $22.3÷4$, the answer will be 5.5 R 0.3.

How to Calculate Division of Two Decimals with Remainder

For example, how do we calculate the following?

In order to do the math, we need to make the divisor an integer. So instead of 3.3, let’s change it to 33. We can do the math as follows. 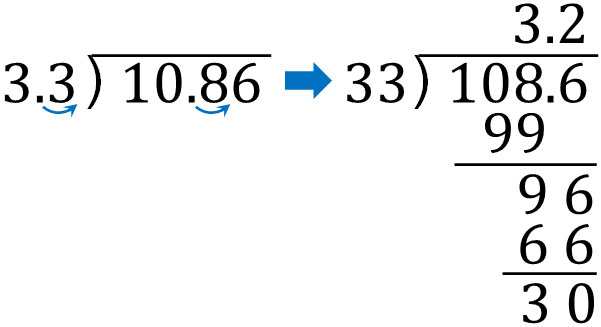 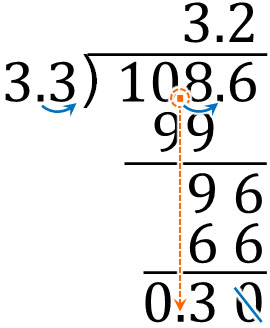 As explained before, the quotient is the same even if you multiply the divisor and the dividend by 10 (or 100). The answer is the same, as shown below.

Next, let’s try multiplying by 10 for the non-divisible numbers. What will be the answers to the following questions?

Even though the divisor is 3, the remainder is 10. Therefore, it is obvious that the answer is wrong.

Calculating Decimals to Find the Quotient and the Remainder

When we do division, the expression may contain decimals. So, let’s understand how to divide them.