In elementary school, we learn decimals in arithmetic. Since multiplication is a common problem in decimals, you need to be able to do multiplication.

How to Multiply Decimals by Integers 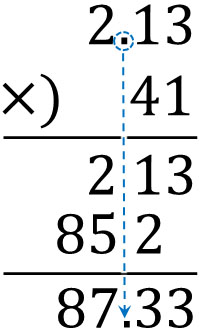 This step allows you to multiply decimals and integers. The only difference between this step and integer multiplication is that you have to put the decimal point directly below after answering.

Why Do We Align Numbers to the Right in Long Multiplication?

In addition and subtraction, we always align the digits. On the other hand, when multiplying decimals, the numbers are aligned to the right. Why is it not necessary to align the digits in multiplication?

As with all multiplication, it is not necessary to align the digits when doing calculations. This is because multiplication is used to indicate how many times a particular number is multiplied. For example, $4.1×2$ means that there are two 4.1s. Therefore, instead of aligning the digits, the numbers are aligned to the right.

For this reason, the digits should be aligned in long addition and long subtraction, but aligned to the right in long multiplication.

Multiplication of Decimals by Decimals: Pay Attention to the Position of the Decimal Point

The basic idea is the same. When you do multiplication, make sure that the numbers are aligned to the right. For example, how would you do the following calculation?

The calculation method is the same as before, ignoring the decimal point and multiplying. The result is as follows. 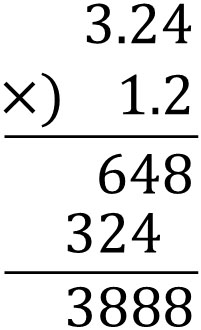 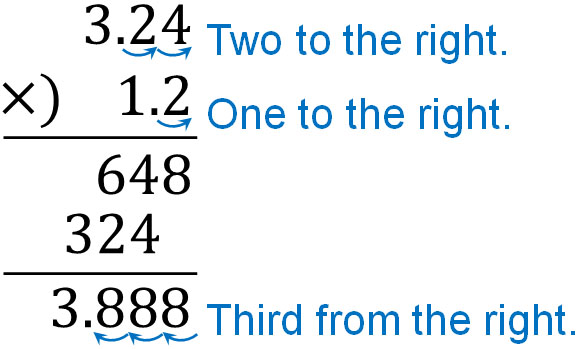 -The Reason Why Multiplication of Decimals Increases the Number of Digits

When multiplying decimals by decimals, a mistake in the digits can result in a different answer. Is there a way to prevent miscalculation?

In order to avoid mistakes in the position of the decimal point, use approximate numbers. For example, how do you calculate the following?

If you do this calculation, the answer will be 72.105. To roughly check if the answer is correct, let’s simplify the multiplication. In other words, make it 25 instead of 25.3 and 3 instead of 2.85. Round off the numbers to the nearest whole number. Then you will get the following.

Simplifying Multiplication of Numbers with Multiple Zeros by Decimals

When doing arithmetic calculations, there are cases that you need to calculate numbers with multiple zeros. When multiplying integers by decimals, there is a way to simplify the calculation.

The more you avoid difficult calculations, the less likely you are to make miscalculations, and you can get the correct answer. So, let’s understand how to simplify the equation. In multiplication, you can move the decimal point to the right by a number of zeros. For example, let’s do the following calculation.

As you can see, the answers are all 1. Also, by moving the decimal point, we can change all of them to a $1×1$ expression. Since there is no need to adjust the digits, let’s simplify the equation by changing the position of the decimal point.

How to Make Percentage Calculations Easier

If you understand this method, you will be able to calculate percentages easily. This is because decimals are almost always used in percentages. For example, 4% is 0.04. Also, 12% is 0.12. So let’s use what we have learned so far in calculating percentages.

The equation for this question is $4000×0.12$. However, this equation is complicated. So, using the knowledge explained earlier, shift the decimal point as shown below. 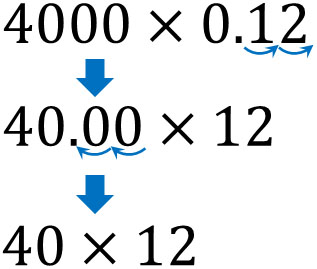 We often calculate percentages in our daily lives. If we move the decimal point in calculations, we will be able to get the answer faster.

Multiplying and Long Multiplication of Decimals

Decimals are numbers that include less than one. Since we often need to multiply decimals, it is important to understand how to do it.

Also, when multiplying numbers with zeros, you can simplify the equation. This is a method that can be used frequently, especially when calculating percentages, so make sure you understand how to do it.