When you learn math, you have to understand negative numbers. Unlike when you were learning only positive integers, learning the concept of zero and addition and subtraction will allow you to perform complex calculations.

It may seem strange to you that there are numbers less than zero. However, we use negative numbers in many aspects of our daily lives. Therefore, it is very important to use negative integers as well as positive integers for calculations.

0 (Zero) Is Used to Indicate a Criteria

If non-existence means zero, the concept of a negative doesn’t make sense. When learning about negative integers, many people get confused because they may think that there are numbers that are smaller than non-existent ones.

However, 0 does not just indicate that it does not exist. It has other meanings as well. It is a criterion. By using zero as a standard, we use positive and negative numbers, depending on whether the number is greater or less than zero.

For example, we use temperature in our daily lives. Temperature has a standard of 0°C (32°F). If the temperature is lower than 0°C, the number is negative. In a city where it snows, many people will experience negative temperatures. 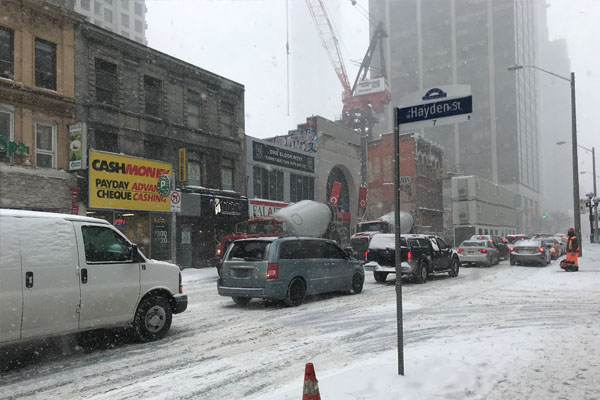 In the following figure, with zero as the reference point, the numbers to the right are positive integers (natural numbers).

On the other hand, numbers to the left of zero are negative integers. By using plus and minus, we can express an increase or decrease from a standard.

For example, let’s consider losing weight by going on a diet. In that case, the majority of people use their current weight as a reference point (zero). If you have lost 3kg of weight, then you can say that you have successfully gained -3kg of weight.

-You Can Replace Plus and Minus

Therefore, the number of pluses and minuses can be replaced. For example, the following have the same meaning.

Also, the following have the same meaning

It is important to understand that these rephrases are possible when learning positive and negative numbers.

How to Distinguish Between Large and Small Numbers, and Absolute Value

With positive and negative numbers, how can we distinguish between large and small numbers? In order to understand this, we need to understand the concept of absolute value.

We have understood that we can check positive and negative numbers based on zero. For large and small numbers, check how far they are from zero. Regardless of whether it is positive or negative, the absolute value is how far it is from zero.

Once we learn this concept, we will be able to distinguish between large and small numbers. For example, with 5 and 3, we can see that 5 is a larger number than 3. Therefore, we can express 5>3. On the other hand, which number is larger, -3 or -5? 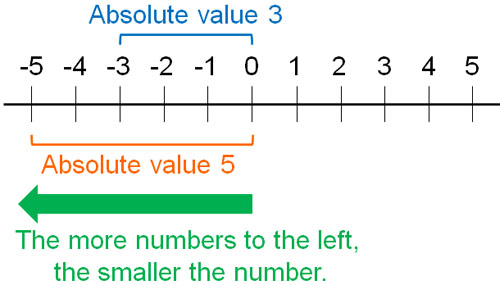 It may seem strange that even though the number is large, the minus sign makes it a small number. However, we also use this in our daily lives.

Addition and Subtraction of Positive Numbers

We will explain each of these.

They all have the same meaning. In addition, you can use two +’s in a row. However, instead of writing ++, we use parentheses.

How can we add a positive number to a negative number? For example, the following calculation.

In contrast, how can we think about subtraction of positive numbers? For example, suppose we have the following calculation

We have already learned about this calculation in elementary school. The important thing is that it can be replaced by the following equations.

-Subtract a Positive number from a Negative number

Of course, it is common to subtract positive numbers (natural numbers) from negative numbers. For example, what is the answer to the following calculation?

Therefore, the answer is -4.

Addition and Subtraction of Negative Numbers

Many people try to learn how to calculate without understanding why. However, you have to understand the reason. So, we will explain including the reasons.

Learn How to Add Negative Numbers by Replacing

Calculations involving the addition of negative numbers are frequently given. For example, how do we think about the following calculation?

As mentioned above, the numbers can be rephrased. For example, if you lose 2kg of weight, you can rephrase it as “I’ve gained -2kg of weight”. Even though it is expressed as an increase in weight, it is a -2 kg plus, so you have lost weight.

In this way, you can replace the positive with the negative. In other words, we can rephrase it as follows.

Subtract 4 from 2 is -2. A number 4 less than 2 is -2. Understand that adding a negative number is, in essence, the same as subtracting a positive number.

Why Negative Subtraction Is Positive?

We can also rephrase this calculation. The minus sign has the opposite meaning. As mentioned above, the expression “I’ve lost 2kg” can be reworded as “I’ve gained -2kg”.

So, how should we think about the expression “I lost -3kg”? Since minus has the opposite property, -3kg decreased means 3kg increased. The minus of a minus is a plus.

That’s why when you subtract a negative number, you can change it to a positive number.

Exercises: Addition and Subtraction of Positive and Negative Numbers

Q1: Express the size of the following numbers using the inequality sign.

In calculating positive and negative numbers, let’s rephrase them. In both junior high school math and high school math, everyone calculates after replacing signs. The point of substitution is as follows.

All addition and subtraction can be rephrased in this way, including decimals and fractions. Therefore, we can calculate as follows.

You cannot solve a problem without rephrasing the pluses and minuses. Make sure you know whether you are adding or subtracting. If you change the signs, it is elementary school arithmetic content, so all you have to do is add and subtract.

Fractions are a little more complicated because you need to reword the signs and then adjust the denominator. However, calculating fractions should be taught in elementary school, so it is not difficult.

Q3: Do the following calculations.

The table below shows how many centimeters taller the four people in A to D are from 160 cm.

a. How many centimeters taller would the tallest person be than the shortest person?

When calculating the difference between the numbers, you have to subtract. For example, according to the diagram above, A is +12 cm tall and C is +7 cm tall; the difference in height between A and C is $12cm-(+7cm)=12cm-7cm=5cm$. In the same way, we use subtraction in comparing numbers.

The height difference between A and D is calculated as follows.

Therefore, the tallest person is 21 cm taller than the shortest person.

b. Find the average height of the four people.

In this regard, let’s try to calculate how much it differs from the average value. As shown below, the heights of the four people are different.

The total difference in height between the 4 people is 6 cm. If you divide the total by the number of people, you can calculate the average value. In other words, we can get the average value of how many cm taller (or shorter) each person is from 160 cm.

Use Positive and Negative Numbers to Add and Subtract

When learning negative numbers, many people are confused; they don’t understand why there are values lower than 0 (zero). Also, most people, even adults, cannot explain why subtraction of a negative number becomes a positive number.

However, as we’ve explained, we find that we use negative numbers in many situations, including in daily lives. 0 means a standard value, and the absolute value is used to compare the size of a number.

In addition, when we actually use plus and minus numbers to add and subtract, we often use parentheses. In calculations that use parentheses, it is always possible to replace signs. Even when solving difficult problems in high school and college, everyone uses replacement, so be sure to do the calculation after the replacement.

Once you learn these rules, you will be able to solve addition and subtraction problems with positive integers (natural numbers) and negative integers. The method is the same for decimals and fractions. Many people have a hard time solving problems with negative subtraction in particular, so make sure you understand including the reasons why.