Few people can explain this reason. However, in order to understand mathematics, we need to solve the question beforehand.

Once you understand the signs in multiplication, you will be able to solve not only division and powers but also advanced questions in four arithmetic operations.

Many people find the calculation of negative numbers difficult because they do not understand the concepts. So, we will explain why the signs change with negative multiplication and how to solve the questions.

Depending on the Sign, Multiplication Can Be Positive or Negative

In mathematics, there is multiplication and division. When multiplying, the sign of the answer will change depending on what sign is used. In multiplication, the result is as follows.

You might be thinking that you have to remember four of them. However, no need to remember these. It is as follows.

Why Is Multiplication by Plus and Minus Possible?

When multiplying, why do positive and negative answers become negative? Let’s solve this question first.

In general, when we solve this question, we think in terms of speed, time, and distance. The following formula exists.

For example, if you walk at a speed of 1 km/h and 3 hours pass, you will have walked a distance of 3 km. Therefore, we can see that multiplication between positive numbers is valid.

-Why Is the Answer Negative for Different Signs?

Why does the use of different signs make the answer negative? The 0 (zero) represents a reference point. And if you use only positive signs, you are only considering the future. But in reality, the past also exists.

For the distance walked, we can make the following figure.

If you think about it this way, you can understand why multiplying a positive number by a negative number results in a negative answer.

In contrast, why is multiplying a negative number by a negative number result in a positive number? As before, let’s consider the relationship between speed, time, and distance. If you walk at -1 km/h and -3 hours pass, where will you be?

Walking at -1 km/h means you are walking westward. Also – 3 hours have passed means that 3 hours ago.

This way of thinking allows us to see why the answer is positive when we multiply the negative by the negative.

The Signs Change for Division as well

We have explained multiplication so far. On the other hand, what about division?

The reason for this is that both multiplication and division are the same. For example, if you walk at a speed of 1 km/h for 3 hours, you will walk 3 km.

So, what is the speed per hour if you walk a distance of 3km in 3 hours? The equation and answer are as follows.

Thus, multiplication can be transformed into division.

However, when doing math calculations, it is rare to calculate only two numbers. Often, we multiply or divide multiple numbers. When multiplying several positive and negative numbers, what happens to the sign?

Not only integers but also decimals and fractions follow this rule. For example, the following is true.

How to Calculate Power Using Exponent

For positive and negative numbers, the concept of power is as important as multiplication and division. Power is a calculation that shows how much of the same number is multiplied. In powers, for example, $3×3$ is expressed as 32. Also, $4×4×4$ is expressed as 43.

The small number in the upper right corner is called the exponent. For example, for 43, 3 is the exponent. By checking the exponent, you can see how many times you need to multiply the same number.

Calculating powers using exponents, we get the following.

When calculating powers, be sure to check how many numbers you need to multiply by looking at the exponent.

When calculating powers, recognizing the difference between signs is the most important part of the answer. For example, what is the answer to the following power calculations?

If you don’t understand the difference, you won’t be able to calculate the powers correctly. So, let’s learn the rules of exponents. Exponents have the following properties.

It is an exponent that does not include the sign and only powers the previous number. Therefore, -32 is calculated as follows.

In contrast, how do we calculate -(-3)2? As mentioned earlier, exponents are only valid for the previous number. Also, the equation in parentheses is considered as a single number. Therefore, the equation is as follows.

The exponent of (-3) is 2. Therefore, we multiply -3 twice. In addition, we have to calculate -3 and the sign (-1) separately. The result is the equation shown above.

In Powers with Fractions, We Should Pay Attention to Parentheses

Depending on whether or not parentheses are present, the answer to the question varies greatly when calculating powers. It is important to pay attention to the parentheses, even for powers with fractions.

The exponent is only valid for the previous number. Therefore, consider the following.

When we solve a math question, we must first calculate powers. This is because powers are the same as a single number. For example, when solving the question $12÷2^2$, it is impossible to solve the question without first calculating 22. 22 is $2×2=4$, so $12÷4=3$.

In the same way, we need to calculate the powers first. Then we get the following.

Consider the question in (c) as follows. 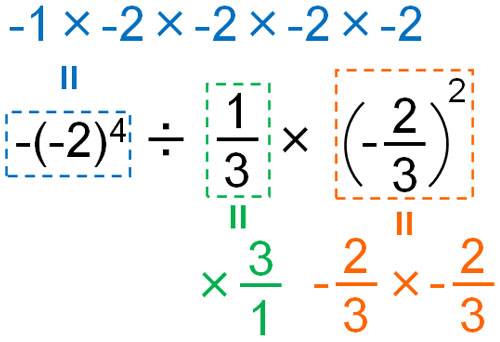 By calculating each one separately, we can finally make the equation for multiplication only.

Calculating Plus and Minus with Multiplication and Division

We can’t do math calculations unless we understand how to calculate plus and minus. So when you multiply and divide, learn how the signs work.