There are also several types of equations that are represented by symbols: monomials and polynomials. What are the differences between these types of expressions? If you don’t understand the rules of algebraic expressions, you can’t add or subtract using these expressions.

So, we’ll explain the rules of algebraic expressions, the difference between monomial and polynomial formulas, and how to add and subtract using these expressions.

In an Algebraic Expression, Turning Unknown Numbers into Symbols

When we look at equations that contain symbols, you may think that it looks difficult to understand.

However, we have been studying algebraic expressions in elementary school. For example, what is included in the following $□$?

You must have solved a problem like this before. The number that goes in □ is 6. For numbers we don’t know, we make an equation by using □. Instead, in the algebraic expressions, the unknown numbers are represented by the alphabet.

For example, in the previous problem, we can replace $□$ with $x$ and write the following.

This is an algebraic expression. We use letters, such as $x, y, a, b$, etc., to represent numbers we don’t know and create an equation.

-Algebraic Expressions Are Useful in Calculations

Why do we use algebraic expressions? It is because they are useful in math calculations. Mathematics is used frequently in our daily life. In most cases, we already know the answer, but we don’t know how to express the process.

For example, here’s an example.

We already know the answer to walking 1,000 km. But we don’t know the process of how many kilometers a day we should walk. So, we replace the numbers we don’t know with symbols such as $x$ and calculate them.

Even if we don’t know the numbers, we can construct an equation and do the calculation. This is the reason why we use algebraic expressions in mathematics.

Understand the Rules of Algebraic Expressions

The rules are not difficult to understand. Just make sure you understand them.

-Omit the × in Multiplication.

When multiplying, we always use the symbol “x.” However, in algebraic expressions, the × is omitted when multiplying. Therefore, you get the following.

In the algebraic expression, what order should we write them in? The rule is that numbers should always be written before the alphabet. Also, if there are several letters, they should be written in alphabetical order. 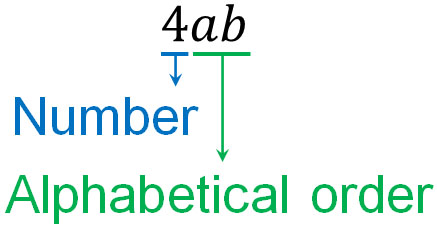 The number 4 is written first. The letters are written in alphabetical order, so they are written as $4ab$.

-Use Exponents to Multiply the Same Letter

The rule for writing numbers first makes us think that we have to write them as follows.

-Don’t Use Division; Use Multiplying Fractions

Division can be converted to multiplying fractions. Don’t use division in algebraic expressions, but use equations with multiplication only.

Learn the Algebraic Expressions for Fractions and Reciprocal Numbers

Divisions can be converted to multiplying fractions by using the reciprocal, as follows.

Note that in the algebraic expression, you can write the alphabet in the numerator or next to the fraction. So, it looks like this.

Both notations are correct. You can use either, but you should be able to write both.

The Difference Between Monomials and Polynomials in Algebraic Expressions

The differences between them are as follows. 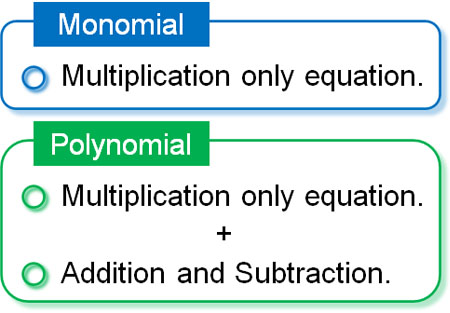 You can understand that a monomial is, in essence, a single algebraic expression.

For reference, when we learn monomials and polynomials in algebraic expressions, we will see the words coefficient, term, and degree. Each of them is as follows.

You don’t need to understand and remember the definitions of these words. However, these words are always found in textbooks that explain monomials and polynomials, so you should understand roughly what they mean.

Coefficients refer to numbers in monomials. For example, it is as follows.

Understand that the numbers in front of the letters, including pluses and minuses, are coefficients.

On the other hand, each monomial is called a term. In the previous equation, the following are the terms. 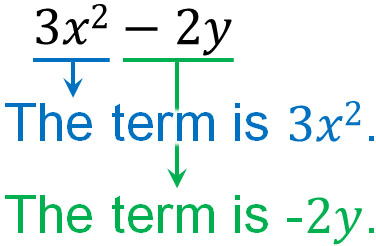 The degree refers to the number of letters (alphabets) contained in a monomial.

Note that a polynomial contains multiple monomials of different degrees. Among these monomials, the highest number of letters is used as the degree.

It is important to understand the definition of degree in a polynomial. The monomial that contains the highest number of letters is the degree of the polynomial. For example, the following equation contains several monomials. 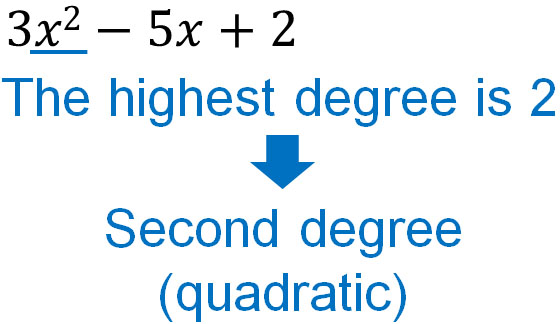 In this equation, the largest degree is 2. Therefore, this polynomial is quadratic.

Even though letters, such as $x$ and $y$, are included in the expression, these algebraic expressions are the same as numbers. For example, suppose we have the following equation.

You can put any number in $x$. So the answer changes as follows.

It is important that even in algebraic expressions, the answer can be a specific number.

Once again, it can be written as follows.

When Subtracting Polynomials, Be Careful of the Negative

Note that in addition and subtraction of algebraic expressions, we must be especially careful in subtraction. When subtracting polynomials with parentheses, many people make a miscalculation. To be more specific, when there is a minus sign in front of the parentheses, calculation errors occur frequently. 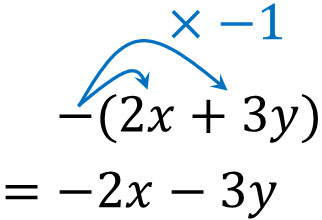 For example, if there is the equation $-(1+3)$, how do you calculate it? We can calculate it as follows. 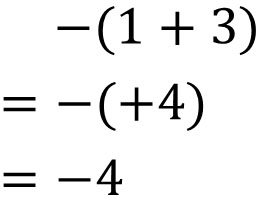 In this equation, we do $1+3$ first because of the parentheses. Then, by multiplying by the minus sign, the answer is -4.

On the other hand, if we remove the parentheses first, how can we calculate? In this case, both numbers are multiplied by -1. This means changing all the signs in the parentheses. As a result, the answer is the same as in the previous example, as shown below. 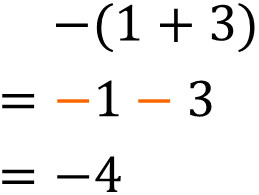 When it comes to adding polynomials, we can solve the problem without any difficulty. On the other hand, when subtracting polynomials, many people make mistakes. There are certain parts of polynomial subtraction that can be miscalculated. When you remove the parentheses in subtraction, calculation errors occur frequently.

It is important to understand where calculation errors are most likely to occur. Also, learn how to solve problems correctly. This will help you to avoid miscalculations in the addition and subtraction of polynomials.

Exercises: Addition and Subtraction of Monomials and Polynomials

In monomial calculations, you have to convert the division into multiplication. So let’s use the reciprocal and convert all of them into multiplying fractions. Then we get the following.

Q3: Do the following calculation.

Learn the Definition and How to Calculate Algebraic Expressions

The rules make it possible for us to do the correct calculation. And don’t just remember the rules; learn the reason why.

Note that when adding and subtracting polynomials, it’s important to combine similar terms. Especially if there is a minus sign in front of the parentheses, calculation errors are more likely to occur. Solve the problem while checking whether the plus and minus signs are correct.