An equation that consists of several algebraic expressions is called polynomials. In polynomial calculations, multiplication and division are frequently used. So we must understand not only addition and subtraction but also how to multiply and divide polynomials.

If you learn how to multiply and divide polynomials, you will also be able to perform substitution calculations. We will explain how to do polynomial multiplication, division, and substitution.

Expanding the Equation: Remove the Parentheses with the Distributive Law

Let’s understand that the distributive property is a rule that allows you to remove parentheses. Specifically, it is as follows. 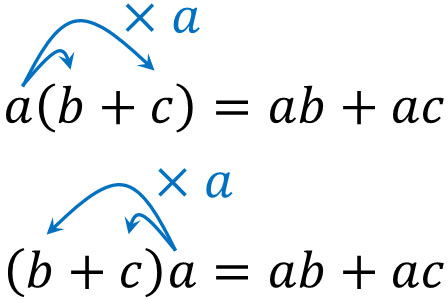 This is one of the most basic formulas and is frequently used in polynomial calculations. By using the distributive property, we can remove the parentheses and convert them into addition or subtraction equations.

Removing the parentheses is called expanding (or developing) in mathematics. When a math problem asks you to expand, it means to remove the parentheses by using the distributive property.

The Reasons Why the Distributive Property Established, Think in Terms of Area

When calculating the area of a rectangle, the following formula is used.

Therefore, the area of the two rectangles below can be calculated by the following formula. 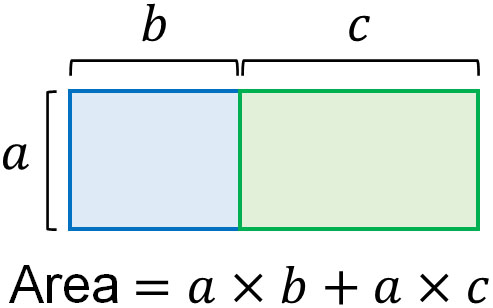 However, when calculating the area, it’s okay to add the horizontal length first. In other words, you can do $b+c$ first.

After doing $(b + c)$ to get the horizontal length, we multiply it by $a$, the vertical length. This method also gives us the total area of the two rectangles. 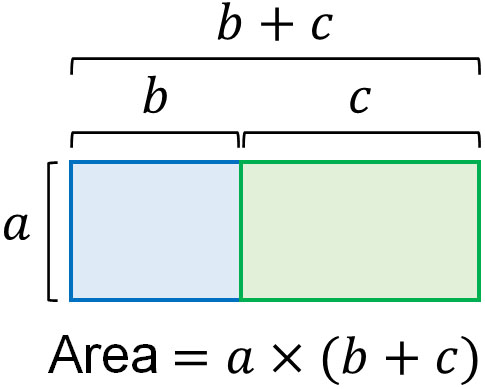 In other words, we see that the following formula holds.

Use the Distributive Property in Algebraic Multiplication and Division

When multiplying with the alphabet, you need to understand the distributive law to be able to do the calculations. In algebraic expressions, you will frequently use the formulas explained earlier.

In algebraic expressions, there are many situations where you have to develop the equation, as shown below. How do we solve such equations?

The distributive property holds not only for numbers but also for letters. So when we expand the equation, we can multiply all the equations in parentheses like below. 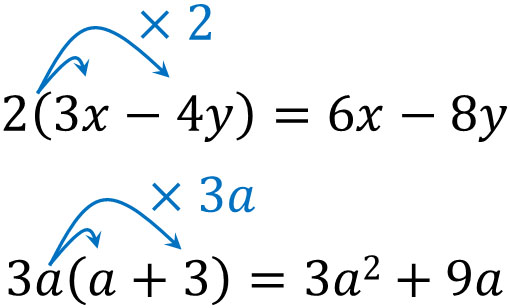 If there are equations with pluses or minuses in parentheses, multiply each of them.

Multiply All Numbers in Parentheses by Minus or Fractions

However, when calculating using the distributive law, calculation errors often occur. In polynomial multiplication and division, miscalculations are more likely to occur in the following.

When expanding an equation, it is wrong to change the sign of only one of the equations in parentheses. For example, the following calculation is wrong.

The same can be said for fractions. In multiplying fractions, if a negative sign is in front of a fraction, you must do the following.

Divisions Are Converted to Multiplying Fractions and Perform Reduction

Note that in math calculations, we don’t use division in all equations after we learn the algebraic expressions. By using the reciprocal, we can always convert them into multiplying fractions. Just be sure to pay attention to the position of the numerator and denominator when using reciprocals.

So, for example, the calculation would look like this. 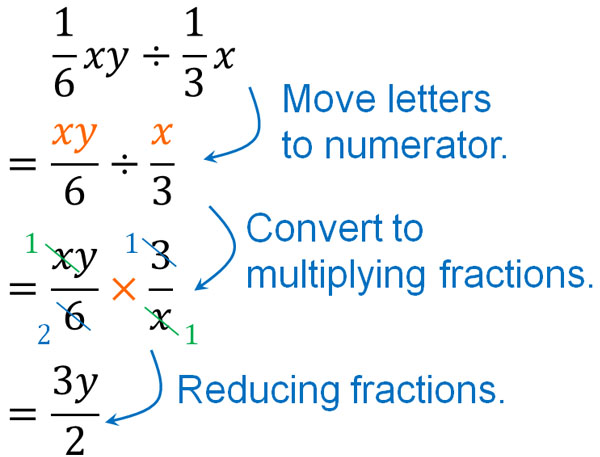 When multiplying (or dividing) in an algebraic expression, there are multiple points where calculation errors can occur. You need to understand which parts of the equation are most likely to be miscalculated and make sure that the signs and reciprocals are correct.

Why do we need to learn how to calculate polynomials? Because it can be converted into simple calculations.

The reason why we need to learn math is that it is used frequently in our daily lives. Mathematics is used for calculations not only in science but also in bookkeeping, programming, marketing, and all other situations. This is why we create an alphabetic equation and put in numbers to get the answer.

For example, we have the following equation.

The answer to this equation depends on what numbers you apply to it, as follows.

Applying a number to an algebraic expression is called substitution. By substituting, you will be able to get the answer you are looking for.

By using substitutions, we can get a specific answer. For example, if $x=3$, the substitution gives the following.

If the algebraic expressions are simple, the problem can be solved without any difficulty. On the other hand, if $x=-3,y=2$, what will be the answer if we substitute into the following equation?

You can calculate by substituting numbers into this equation. However, the calculation is so complicated. 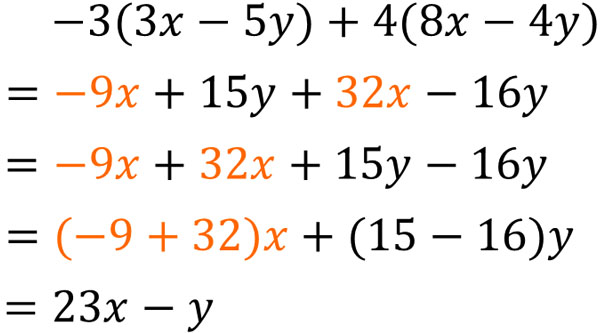 When you substitute, calculate the algebraic expressions first. Then, substitute numbers into the alphabet to get the answer.

The same is true for fractions. If a minus sign is present in front of a fraction, the sign will change according to the distributive property. So we get the following calculation. 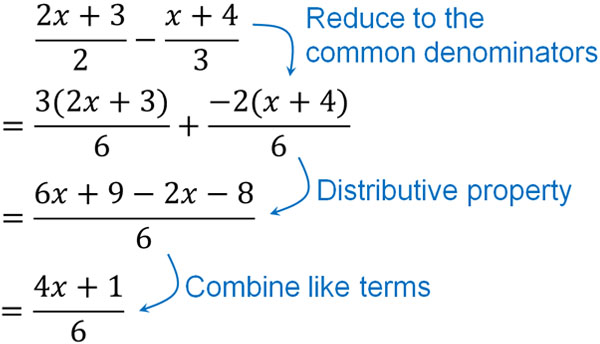 In the substitution calculations, calculate the algebraic expressions first. If you do so, it will be easier to calculate when you substitute numbers.

Learn How to Calculate Distributive Property and Polynomials

In mathematics, calculations are almost always done with algebraic expressions. Therefore, you need to understand how to calculate polynomials. After learning addition and subtraction, the next important thing to learn is how to multiply and divide polynomials.

In addition, there are some points where many people make calculation errors when calculating algebraic expressions using the distributive law. The following are the parts.

If there is a minus sign in front of the parentheses or fraction, be careful whether the sign is positive or negative when you expand the expression using the distributive law. Also, when using reciprocals, check whether the letters are in the numerator or denominator. If you pay attention to these, you will be able to avoid mistakes in your calculations.