There are many organic compounds that involve oxygen atoms. Among these compounds, ethers are the functional groups in which carbon atoms are connected by oxygen atoms.

There are only a few types of important organic reactions using ethers, and all you have to do is understand the cleavage reaction under acidic conditions. In other words, one molecule is split into two by cleaving of the ether.

Also, the ether of a triangular cyclic compound is called an epoxide. Epoxides are important compounds in organic chemistry, and we need to understand how to synthesize epoxides and how to subsequently react them to obtain the target compounds.

Therefore, we will explain the synthetic reactions of ethers and epoxides, and what products can be obtained.

The Ether Is Cleaved by Acid Catalyst

There are functional groups that are difficult to chemically react with in their original state due to their low reactivity. One such group is the ether. The oxygen atom is strongly bonded to the carbon atom, and the bond will not cleave. Therefore, in order for the ether to chemically react, we have to activate it.

How can the ether be activated? One way to do this is through the use of an acid catalyst. By adding an acid catalyst such as sulfuric acid (H2SO4), hydrogen chloride (HCl), or hydrogen bromide (HBr), we can activate the ether.

Why does the presence of an acid catalyst activate ether? The presence of acid causes a hydrogen atom (proton) to bond to the oxygen atom of the ether; as a result of the H+ bonding, the ether becomes positively charged.

Regioselectivity Is Based on the Stability of the Carbocation

When acid-catalyzed ether cleavage occurs, it seems that several different types of compounds can be obtained. For example, the following two compounds seem to be produced as intermediates under strong acid conditions when reacting with hydrogen bromide. 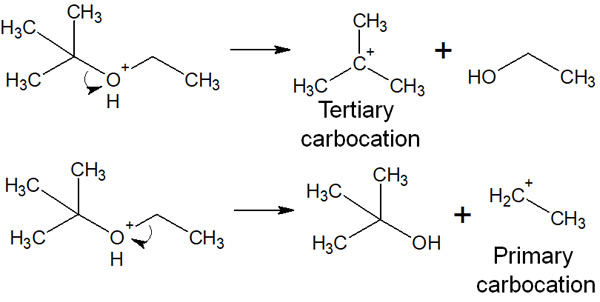 However, in the actual synthetic reaction, only one intermediate is produced. Therefore, only a specific compound can be synthesized instead of several compounds.

As a result, only a certain compound can be synthesized.

In ether cleavage reactions, there is regioselectivity. When hydrogen halides, such as hydrogen chloride (HCl) or hydrogen bromide (HBr), are used as acid catalysts, the location where ether cleavage occurs is determined.

-When the SN1 Reaction Is Impossible, the SN2 Reaction Occurs

What happens in the case of unstable intermediates such as primary carbocations, which are rarely formed under normal conditions? In this case, the synthetic reaction proceeds by the SN2 reaction, not the SN1 reaction in which the carbocation is formed as an intermediate.

The SN2 reaction is the one that gives the product in a single reaction without the formation of a carbocation. For example, we have the following.

In any case, understand that the SN1 or SN2 reaction causes ether cleavage and splits one molecule into two.

In the case of sulfuric acid, on the other hand, even if H+ is provided, halogen ions are not generated. In addition, sulfate ions are stable and do not attack as nucleophiles.

Therefore, when sulfuric acid is used as a catalyst, the E1 reaction occurs. The E1 reaction is known as an elimination reaction, in which a compound with a double bond is formed when the sulfate ion pulls out a hydrogen atom (proton).

For example, in the case of the previous compound, the following compound can be synthesized by using sulfuric acid instead of hydrogen bromide.

Understand that sulfuric acid cannot act as a nucleophilic reagent, so instead, it pulls out protons and causes an elimination reaction as an E1 reaction.

Synthesis of Epoxides by Epoxidation Reaction with Oxidizing Agents

As we have discussed, the acidic conditions allow the ether to cleave to yield other compounds. On the other hand, there is a special ether: epoxide. It is a cyclic ether and has a triangular shape.

When learning about the reactivity of ethers, epoxides have a special organic reaction.

-Oxidation of Alkenes to Obtain Epoxides

How do we synthesize epoxides? The synthetic reaction to obtain epoxides is called the epoxidation reaction. In epoxidation, alkenes are used.

Peracids are also used in epoxidation. The famous peracid is hydrogen peroxide, and epoxides can be synthesized by using peracids. The reaction mechanism is as follows.

The reaction mechanism is a little more complicated, and the synthetic reaction by epoxidation occurs when electrons are transferred at once.

In epoxidation reaction by peracids, the synthetic reaction proceeds with the three-dimensional structure of the alkene preserved by syn-addition.

Reactivity of Epoxides under Acidic and Basic Conditions

Because epoxides are highly reactive, there are so many nucleophiles that can be used.

In addition to these nucleophiles, many other nucleophiles react with epoxides to obtain products. However, it is important to note that when a nucleophile attacks an epoxide, it can attack in two places. 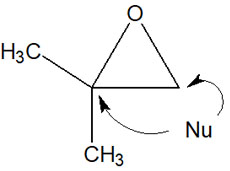 Which carbon atom does the nucleophilic agent attack? This depends on whether the reaction conditions are basic or acidic.

Nucleophilic Attack on a Carbon with Few Substituents under Basic Conditions

The synthetic reaction proceeds as follows.

By attacking the carbon atom with less steric hindrance, only a specific product can be obtained. This is the synthetic reaction of epoxides under basic conditions.

Considering the order of stability of the carbocations, the tertiary carbocations have more positive properties. Therefore, positively charged oxygen atoms and polysubstituted carbon atoms repel each other. The image is as follows. 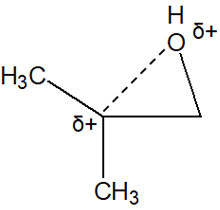 Compared to other bonds, the C-O bond is longer. The bond is also weaker than other bonds. As a result, the nucleophile attacks the polysubstituted carbon atoms.

For these reasons, under acidic conditions, the nucleophile attacks carbon atoms with many substituents.

The compounds produced depend on whether the reaction conditions for the epoxide are acidic or basic. Try to understand these reaction mechanisms.

Synthetic Reactions of Ethers and Epoxides

For molecules with oxygen atoms, there are many ether compounds. So you have to learn how the ether is involved in organic chemistry.

The reactivity of the ether is poor. Therefore, it needs to be activated, and by using an acid catalyst, a proton is bonded to the oxygen atom, causing ether cleavage. Also, by changing the acid catalyst used, nucleophilic substitution reactions or E1 reactions (elimination reactions) will occur.

In addition, be sure to learn about the reactivity of epoxides as well. By using a peracid, epoxidation reactions can take place to obtain an epoxide. Then you can react with the epoxide by adding a nucleophile.

These are the important details in the reactivity of the ether and epoxide. The ether produces different compounds and regioselectivity depending on the reaction conditions, so make sure you understand these.