The addition of carbon chains to molecules is important when synthesizing compounds in organic chemistry. One such synthetic reaction is the Wittig reaction.

So how can we perform the synthesis of a double bond from a carbonyl compound? What happens to EZ selectivity when making alkenes?

Without understanding the reaction conditions and the reaction mechanism, we cannot obtain the desired compound. So, we will explain how to use the Wittig reaction.

Wittig Reaction, the Most Important Reaction in Alkene Synthesis

The famous synthetic reaction to create a double bond is the E2 reaction (elimination reaction). However, the conditions for the E2 reaction are extreme, such as reacting under the strong base and high-temperature conditions. There is also the problem of EZ isomerism (cis/trans).

In addition, the E2 reaction may cause a nucleophilic substitution, resulting in the formation of by-products.

If you want to synthesize a double-bonded carbon chain, the Wittig reaction is the first reaction to consider.

Alkenes Can Be Synthesized from Ketones and Aldehydes

There are different types of carbonyl compounds. Among them, the Wittig reaction can be performed with molecules containing carbonyl (ketone) and formyl (aldehyde) groups.

We use organophosphorus compounds in the Wittig reaction, which are called phosphonium ylides (Wittig reagents). 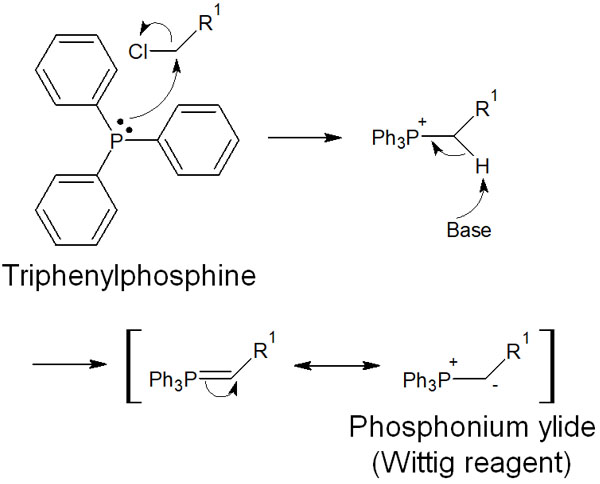 With the use of phosphonium ylide (Wittig reagent), ketones or aldehydes can be reacted to yield alkenes as follows.

The use of a special reagent, phosphonium ylide, makes it possible to synthesize alkenes.

The Wittig reaction is a synthetic method discovered by Georg Wittig, who won the Nobel Prize in Chemistry in 1979 for his work on organic synthesis using organophosphorus.

The Reaction Mechanism Is Nucleophilic Addition by Phosphorus Ylides

How does the Wittig reaction work? The phosphorus ylides attack the carbonyl carbon by nucleophilic addition.

The reaction mechanism is as follows.

After the nucleophilic attack by the phosphorus ylide, the negatively charged oxygen atom attacks the phosphorus atom. This results in the formation of a four-membered ring intermediate. This intermediate is called oxaphosphetane.

An important point is a fact that the P=O bond is very strong. After the synthesis of the oxaphosphhetane intermediate, the elimination reaction proceeds to form the P=O bond, and thus the alkene is synthesized.

What Is the Ylide in the Wittig Reagent? Stable and Unstable Ylides

The Wittig reaction uses a special reagent called Wittig reagent. Naturally, depending on the type of phosphonium ylide (Wittig reagent) used, the compounds obtained are different.

So, what are ylides? Ylides are molecules in which a negatively charged carbon atom and a positively charged heteroatom (an atom other than carbon or hydrogen) exist next to each other. Among the ylides, phosphorus ylides are the most frequently used.

Phosphonium ylides (Wittig reagents) are a type of phosphorus ylides.

Why does the presence of these functional groups make it a stable ylide? This is because we can write the following resonance structure.

Stable ylides can be isolated. The presence of electron withdrawing groups makes it possible to produce the Wittig reagent as a compound in a highly stable state.

Unstable ylides, on the other hand, do not have electron withdrawing groups like stable ylides. Since unstable ylides decompose when exposed to water or air, it is impossible to isolate them.

Possible to Control the Stereochemistry of Cis-Trans (EZ compounds)

Why is it important to understand stable and unstable ylides? It’s because we can control stereochemistry.

When synthesizing alkenes, there is always a problem with geometric isomers. The problem of cis-trans arises. So we have to synthesize them in such a way that we can selectively obtain either the E or the Z form.

In the Wittig reaction, depending on whether the phosphonium ylides to be used are stable or unstable ylides, the compound to be synthesized will be either E or Z-form. Specifically, there are the following differences between the Wittig reagents.

In general alkene synthesis, it is difficult to regioselectively synthesize only a specific EZ isomer. On the other hand, the Wittig reaction allows us to synthesize isomers separately.

Why the EZ Isomer Can Be Synthesized Separately

Why is it possible to separate the synthesis of EZ isomers depending on the stability of the ylides? The reason for this is explained by differences in steric hindrances and reversible reactions.

In stable ylides, the reaction in which the phosphorus atom attacks the carbonyl carbon to form oxaphosphetane is a reversible reaction. Therefore, when considering the stability of intermediates, steric hindrance occurs in the cis (Z-form). In the trans (E-form), the synthetic reaction proceeds in an E-selective manner in the stable ylides because a larger substituent exists on the opposite side.

The synthesis reaction proceeds with the initially generated oxaphosphetane. In this case, in order to react with the lowest steric hindrance, it is necessary to pass through the intermediate of the four-membered ring, as shown in the figure below.

When oxaphosphetane is synthesized in this way to reduce steric hindrance, we yield a Z isomer (cis) intermediate. It is not converted to an E isomer (trans) after forming the intermediate, as is the case with stable ylides.

The difference in whether an oxaphosphetane intermediate becomes a syn-form or an anti-form is explained by whether it is a reversible or irreversible reaction.

The Horner-Wadsworth-Emmons Reaction, an Application Reaction

The Horner-Wadsworth-Emmons reaction is a synthetic reaction that uses phosphate esters as reagents in organophosphorus compounds.

In addition to esters, it can also be used with other functional groups such as amines, ethers, and allyls. Therefore, it is a highly useful synthetic reaction.

Since there are other applications of the Wittig reaction with organophosphorus compounds, learning these synthetic reactions will enable us to synthesize a wide range of compounds.

Wittig Reaction, the Most Important Reaction in Alkene Synthesis

In addition, the reaction is selective for carbonyl groups and produces fewer by-products than other synthetic reactions. Many applications of the Wittig reaction have been reported, and it is possible to synthesize a wide variety of compounds.