Unlike single and double bonds, triple bonds have special properties. For example, due to their high acidity, they can be used in synthetic reactions that are different from those of other compounds.

How does a compound with a triple bond undergo organic chemical reactions? The addition reaction of alkynes, acidity, and acetylide synthesis will be explained here.

If a compound has a triple bond, it can become a double bond through a chemical reaction. When synthesizing alkenes from alkynes, electrophilic addition reactions are widely used.

Alkynes have π bonds (π-electrons). Among the covalent bonds, the pi bond is the one with a relatively weak force bond. Due to the presence of π-electrons, alkynes are electron-rich. Therefore, an addition reaction occurs when an alkyne reacts with an electrophilic reagent.

In electrophilic addition reactions, HX (hydrogen halide) is frequently used as an example. For example, when hydrogen bromide reacts with an alkyne, the following compound is produced.

Stability and Hyperconjugation of Vinyl Carbocation

The order of stability of the carbocations is as follows.

The addition reaction of alkynes is slower than that of alkenes. This is due to the low stability of the vinyl carbocation, which makes it difficult to generate intermediates.

What is important is where the substituents will bound in the addition reaction. In the previous compound, there are two possible compounds that can be obtained.

How should we think about this reaction? The key point is hyperconjugation.

The stability of the carbocation is explained by hyperconjugation. Carbocations are unstable intermediates, but they share electrons weakly when there is a C-H bond next to them. 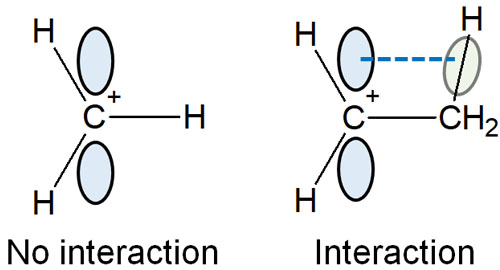 The p-orbital of the carbocation and the C-H bond are parallel to each other. As a result, the molecule becomes stable as the electrons are distributed in various locations.

In the case of vinyl carbocation, the effect of hyperconjugation is as follows. 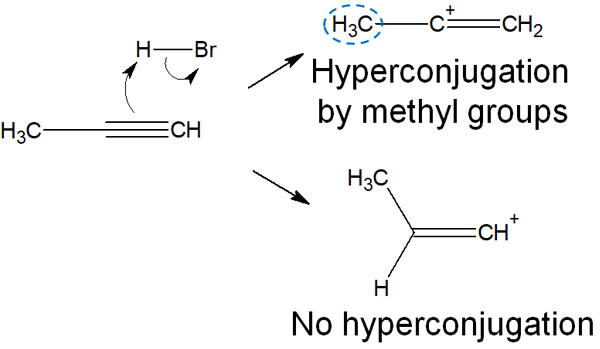 When the addition reaction of alkynes occurs, the methyl group is next to the alkynes, so hyperconjugation by the C-H bond occurs. The p-orbital of the carbocation and the C-H bond are parallel to each other.

In contrast, the other carbocation has no hyperconjugation. The neighboring carbon atom is anchored by a double bond, and the C-H bond cannot be parallel to the p-orbital of the carbocation. As a result, one compound can be obtained.

The s-orbitals are smaller than the p-orbitals. Therefore, the higher the s-character, the closer the electron is to the nucleus. Alkynes are known to be highly acidic because electrons with a negative charge and protons with a positive charge attract each other.

The order of acidity is as follows.

In other words, compared to alkanes and alkenes, alkynes are more likely to release H+ and become ions (HC≡C– and H+). This high acidity is due to their high s-character. Even if they produce a negative charge, electrons are closer to the proton (positive charge) and easier to stabilize.

So far, we have explained how alkynes cause addition reactions when hydrogen halides, such as HCl (hydrogen chloride) and HBr (hydrogen bromide), are used.

However, the addition reaction occurs not only in the triple bond but also in the double bond. Therefore, the addition of two or more equivalents of hydrogen halide (HX) produces a single-bonded alkane instead of a double-bonded alkene.

As for which compound is given preference, consider the stability of the intermediate in the same way. When alkanes (single bonds) are synthesized from alkenes (double bonds), you can write resonance structures for the carbocation with the bromine atom bonded next to it.

The more you can write resonance structures, the more stable the molecule will be. Therefore, when an alkane is synthesized from an alkene, only a certain intermediate is produced, and the synthetic reaction proceeds.

In this case, we can get a compound with two bromine atoms bonded to the same carbon atom. 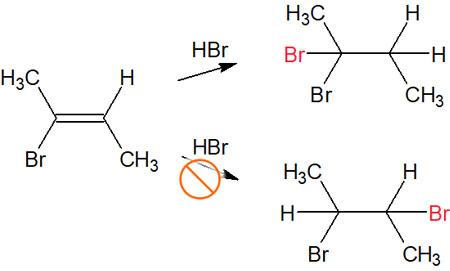 For what compounds you will get, check the stability of the intermediates. Then you can predict the main product.

In general, consider Markovnikov’s rule for alkene addition reactions. You can predict which compound will be formed by the stability of the carbocation, such as tertiary or secondary. However, in this case, both carbocations are secondary carbocation.

Therefore, even if we consider Markovnikov’s rule, we cannot predict which compound will be the main product. Therefore, we need to take into account another factor, the resonance structures.

-Trans Compounds Can Be Obtained by Halogen Addition

Although we have been considering the addition reaction of hydrogen halide, the reaction mechanism is simple if it is an addition reaction of a halogen (such as Cl2 or Br2). This is because the same halogen atom, such as a chlorine atom or a bromine atom, is added. There are fewer situations where we have to consider regioselectivity of which substituent to bond to.

In the case of halogen addition reactions, the anti-addition yields a trans alkene. If more than two equivalents of the halogen are present, the reaction can proceed further to give an alkane.

In this way, the synthetic reaction proceeds.

In a typical addition reaction, as described above, alkenes (double bonds) are synthesized from alkynes (triple bonds). If the amount of reagent is large, the product will be an alkane (single bond). On the other hand, in the hydration reaction, ketones are synthesized.

In the hydration reaction, an acid catalyst such as sulfuric acid is used. These acid catalysts (sulfuric acid) give rise to carbocation in alkynes. After the formation of the carbocation, the water molecules attack it to obtain the alcohol. The reaction mechanism is as follows. 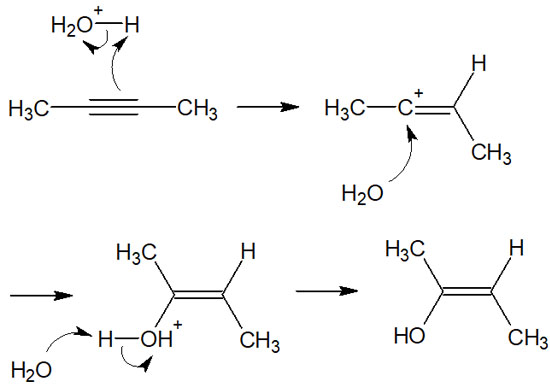 The reaction is the same as the alkene synthesis by addition reaction. Also, although regioselectivity must be taken into account for some molecules, if you understand what has been explained so far, you will be able to predict where the substituents will be bound.

However, in the hydration reaction of alkynes, the resulting compound is not an alcohol but a ketone. Why ketones and not alcohols? This involves the keto–enol tautomerism.

Normally, after alkenes are synthesized by addition to alkynes, if there is an excess of reagent, the reaction proceeds further to give alkanes (single bonds). However, in the hydration reaction of alkynes, ketones are obtained by keto-enol tautomerization in this way.

Hydroboration to Alkynes to Obtain Aldehyde

In hydroboration, borane (BH3) is used as a reagent. Because of steric hindrance, the boron atoms of borane react chemically with the fewer substituent atoms in both alkenes and alkynes.

Synthesis with terminal alkynes is particularly important in the hydroboration of alkynes. When an alkyne is present at the end of the molecule, the borane reacts as follows.

According to Markovnikov’s rule, as already explained, the stability of the carbocation is important. Therefore, a hydrogen atom (proton) is added to a carbon atom with few substituents, taking into account the effects of hyperconjugation, etc.

On the other hand, no intermediates of the carbocation are formed in hydroboration. Hydroboration is an addition reaction by syn-addition (addition reaction from the same direction). In this case, due to steric hindrance, the boron atom is bonded to the terminal carbon atom with few substituents.

Afterward, alcohol is synthesized through a separate oxidation reaction with hydrogen peroxide (H2O2).

However, since it is an alkyne addition reaction, the compound synthesized is an alcohol in enol form. Therefore, the shape of the compound changes depending on the keto-enol tautomerism. When a synthetic reaction of hydroboration and oxidation is performed on a molecule with a terminal alkyne, the final compound is an aldehyde.

If the triple bond is in the molecule rather than at the end, ketones can be obtained by keto-enol tautomerization. On the other hand, hydroboration of terminal alkynes yields aldehydes.

Acetylide Is Produced by Strong Base

Although the addition reaction is useful, the triple bond is always lost. In other words, a compound with a double bond or a single bond can be obtained. So, how can we synthesize compounds with triple bonds? In this case, acetylide is important.

As mentioned above, terminal alkynes have a higher degree of acidity than alkanes (single bond) and alkenes (double bond). The high acidity means that H+ (protons) can easily be pulled out to form ions.

Therefore, for compounds with terminal alkynes, we react them with a strong base such as sodium amide (NaNH2). As a result, the hydrogen atom of the terminal alkyne is pulled out to form an acetylide.

As for acetylide, sodium acetylide is sometimes sold as a reagent, which can be used. However, metal acetylides can be explosive, so be careful when using them.

Thus, after obtaining acetylide by a strong base, alkyne compounds can be synthesized through nucleophilic substitution reactions.

The acetylide anion is a strong base and has strong nucleophilic properties. Therefore, compounds can be alkylated by undergoing nucleophilic substitution reactions. As a result, an alkylated compound with a triple bond can be synthesized.

When you want to synthesize compounds with triple bonds, one method is the nucleophilic substitution reaction using acetylides. Since terminal alkynes such as acetylene are highly acidic, this property can be used to synthesize alkyne compounds.

Understanding the Reactions of Compounds with Triple Bonds

However, some compounds have triple bonds. The two most important reactions in alkynes are the following.

In addition reactions of alkynes, the final product depends on the type of synthetic reaction. It is also important to know where the substituents will be bound. The stability of the intermediates should be taken into account so that you can predict what kind of compound you will be able to synthesize.

If you want to synthesize a compound with a triple bond, you can utilize acetylide anions. Through nucleophilic substitution reactions, alkyne compounds can be obtained. Understanding these reaction mechanisms will help you to think about how to proceed with the synthesis of alkynes.