Organic compounds that have a hydroxy group (-OH) are called alcohol. For ordinary people, alcohol refers to ethanol, and many people get drunk by drinking beverages containing ethanol. However, in organic chemistry, we describe alcohol as including compounds with hydroxy groups.

There are many compounds that contain alcohols, and alcohols can be synthesized into a variety of compounds. Different products can be produced by changing the reagents used in the reaction.

The major alcohol reactions include the following synthetic reactions.

Since each of these is a different synthetic reaction, the reaction mechanism is different. However, it is necessary to understand the mechanism of each reaction because it is possible to synthesize a wide variety of compounds using alcohol.

In the Oxidation Reaction, the Products are Different in the Primary, Secondary and Tertiary

The first synthetic reaction to understand with alcohol is oxidation. Oxidation of alcohol allows us to synthesize aldehydes, carboxylic acids, and ketones. This means that other functional groups can be synthesized from alcohol.

The type of functional group that can be synthesized depends on the environment of the substituents attached to the carbon. It also depends on what reagents are used.

The products are different depending on the primary, secondary, and tertiary of alcohol oxidation. They are as follows. 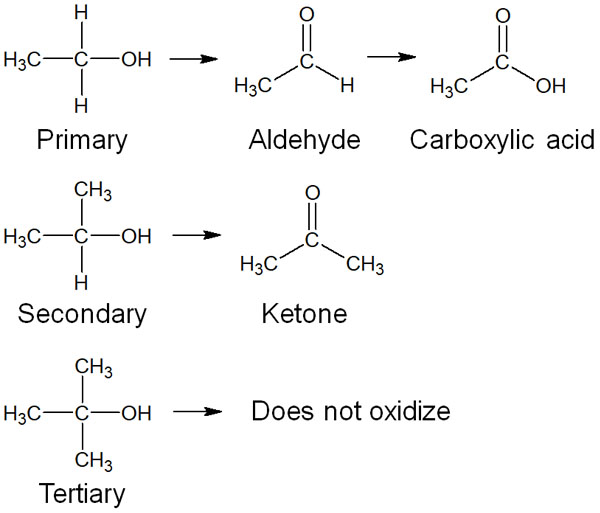 Depending on how the alkyl chains are bound to the carbon atoms, the compounds formed in the oxidation reaction differ. Note that tertiary alcohols are not oxidized. Alcohols are not always oxidized.

Note that hexavalent chromium is highly toxic, and care must be taken when treating the waste liquid after the synthetic reaction. As for hypochlorous acid, it is the main component in chlorine bleach.

Chromic acid and hypochlorous acid can be used to obtain the following compounds.

By oxidation of secondary alcohols, only ketones are produced. On the other hand, is it possible to obtain aldehydes from the oxidation of primary alcohols? In this regard, aldehydes cannot be obtained by oxidation with chromic acid or hypochlorous acid. This is because carboxylic acid is formed immediately after aldehyde is formed.

Therefore, in general oxidation reactions of alcohols, carboxylic acids or ketones can be obtained.

The synthesis of carboxylic acids and ketones by oxidizing alcohols is one of the name reactions called Jones oxidation, which uses chromic acids such as CrO3 and H2CrO4. It is a synthetic reaction in an aqueous solution, and aldehydes are synthesized by the following reaction mechanism. 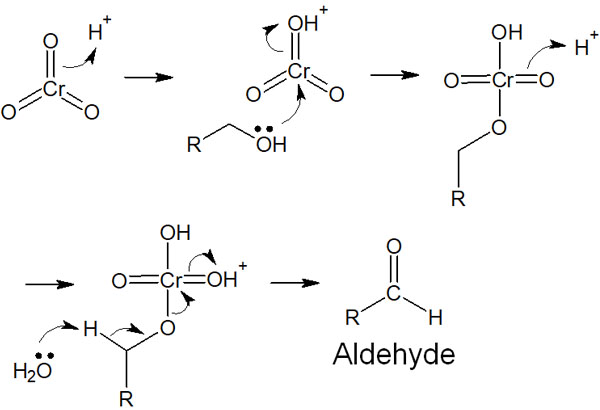 So, what is the reaction mechanism when primary alcohols are converted to carboxylic acids by Jones oxidation using chromic acid?

In the presence of water, the aldehyde undergoes a hydration reaction with water. The result is the formation of geminal diols (or gem-diols). The reaction mechanism is as follows. 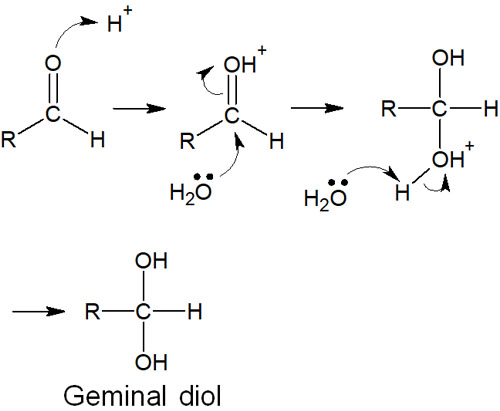 In any case, the hydration reaction proceeds in the presence of water, and the aldehyde is transformed into a compound with two hydroxy groups (gem-diol).

The geminal diols are then oxidized to form carboxylic acids by reacting with chromic acid again.

Importantly, because of the presence of water in Jones oxidation, an aldehyde is formed and then hydrated to form -OH. The result is the synthesis of carboxylic acids.

Aldehyde Synthesis Under Anhydrous Conditions by PCC and Swern Oxidation

Thus, carboxylic acids and ketones can be obtained by Jones oxidation with chromic acid. So, when oxidizing primary alcohols, can’t we stop at the synthesis of aldehydes instead of proceeding to carboxylic acids?

Depending on the method, it is possible to synthesize aldehydes by the oxidation of alcohols. The way to do this is to proceed with the oxidation reaction in anhydrous conditions.

PCC (pyridinium chlorochromate) is a reagent that enables the oxidation reaction under anhydrous conditions. The following is the structural formula of PCC. 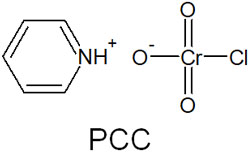 When PCC (pyridinium chlorochromate) reacts with primary alcohol, the reaction mechanism is as follows. 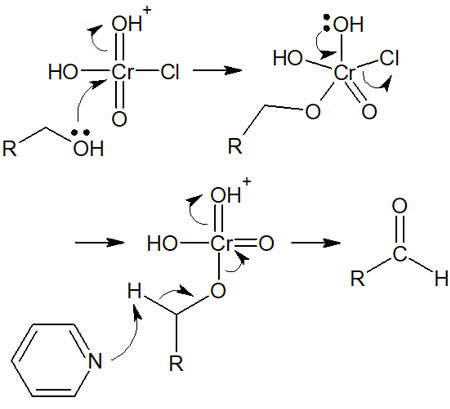 After obtaining the aldehyde, the reaction stops. Since there is no water present, the oxidation of the aldehyde to carboxylic acid does not occur.

Swern oxidation is also used in the organic synthesis reactions to obtain aldehydes. In Swern oxidation, which is one of the name reactions, aldehydes are obtained by oxidizing primary alcohols under anhydrous conditions as in PCC.

By reacting at a low temperature, such as -78°C, Swern oxidation allows the synthetic reaction to proceed with fewer unwanted by-products. It is one of the most frequently used synthetic methods in organic chemistry.

In short, under anhydrous conditions, we can understand that oxidizing primary alcohols can obtain aldehydes. In addition, ketones can be obtained by using PCC or Swern oxidation for secondary alcohols.

As explained so far, the final product obtained varies with the oxidizing agent used and the synthesis conditions. On the other hand, what happens in other organic synthesis reactions instead of the oxidation of alcohol?

In general, alcohol is known to be a neutral substance. Both methanol and ethanol are neutral. However, in organic chemistry, it is necessary to think about the relationship between acids and bases. By coexisting with a strong base, alcohol can be used as a base (nucleophile).

Alcohols contain oxygen atoms and have a high degree of electronegativity. Therefore, they are polarized within the molecule, and in the presence of a strong base, they release H+ and become alkoxide ions. In many cases, alkali metals are utilized for pulling out the H+ bound to the alcohol.

The most common alkali metal is sodium (Na). By adding sodium hydride (NaH) as a reagent, the hydrogen (proton) in the alcohol is pulled out and ionized. Thus, a strong base (strong nucleophile) is formed as an alkoxide.

Nucleophilic substitution reactions with alcohols are important if you want to synthesize an ether.

However, in its original state, OH does not become a leaving group. Therefore, an acid catalyst is used. By using a strong acid, hydrogen (proton) bonds to the oxygen atom, and -OH becomes -OH2+. Since -OH2+ is an excellent leaving group, it can cause substitution or elimination reactions.

For example, by reacting an alcohol with hydrogen chloride (HCl), the hydroxy group is replaced by a chloro group.

However, if HCl (hydrogen chloride) or HBr (hydrogen bromide) is just added to alcohol, the reaction often does not proceed. Therefore, halogenation is usually carried out with a reagent such as a thionyl chloride (SOCl2) or phosphorus tribromide (PBr3).

By adding acid chlorides, the synthetic reaction proceeds through this reaction mechanism.

So why do we halogenate alcohols? Halogens bonded to alkanes are excellent leavening groups and undergo a nucleophilic substitution reaction with alcohols or amines. Therefore, it is possible to make new bonds such as the following. 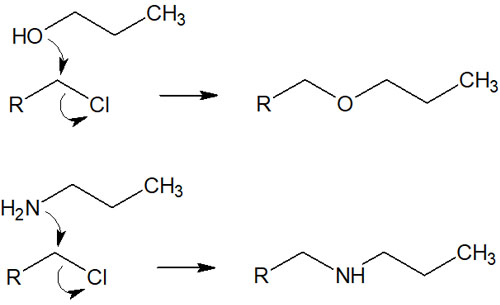 The synthetic reaction rarely ends with just halogenation utilizing an acid catalyst (acid chloride). The target compound can then be obtained by reacting it again.

In any case, understand that you can synthesize alkyl halides by halogenating them. You can use the alkyl halide to proceed with the next synthetic reaction. 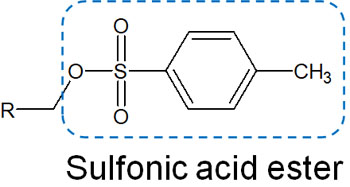 Like halogens, sulfonate esters act as good leavening groups. Therefore, new bonds can be made by nucleophilic substitution reactions.

The reaction mechanism is the same as for alkyl halides. After synthesizing the sulfonate ester, a nucleophilic agent is added to the solution for the substitution reaction.

What is important is the fact that alcohol can be converted to an excellent leaving group. Subsequently, by adding reagents, a substitution reaction takes place, allowing new compounds to be synthesized.

There Are Different Types of Alcohol Synthetic Reactions

Different functional groups have different properties, and it is important to understand what kind of synthetic reactions are possible. Among them, alcohols have three main reactions.

Oxidation and nucleophilic substitution reactions are the main synthetic reactions for alcohols. For oxidation reactions, it is important to understand that the products will vary depending on the reagents used and the synthetic environment.

The synthesis of alcohols has these characteristics. Each reaction mechanism is different, but we should understand how alcohols react because they are all synthetic reactions that we use frequently.