An important element in organic chemistry is the influence of substituents. The properties of a molecule change depending on what functional group is attached to the alkyl chain or benzene ring.

Two particularly important effects of the substituents are the inductive effect (I effect) and the resonance effect (R effect). The acidity of the molecule will be different depending on the substituents that are bonded to it. It also depends on whether the substituent is bound to an alkyl chain or a benzene ring.

So make sure you understand the principles of the inductive and resonance effects. Once you understand the nature of the substituents and learn how to distinguish between electron-donating and electron-withdrawing groups, you’ll be able to figure out what the acidity of the molecule is.

The differences between the two are as follows.

Particularly important is when it is bonded to an alkyl chain. An alkyl chain without double or triple bonds will not cause resonance. Therefore, for alkyl chains, we only need to consider the inductive effect.

When an atom with a high degree of electronegativity bonds together, it will strongly attract electrons. As a result, the molecule will produce a positive and negative charge, even if it is the same molecule. This is known as polarization. Water, ammonia and hydrogen chloride are known to be polarized.

For example, acetic acid is known as an acidic substance. When a carboxylic acid is present, it shows acidic properties. However, even if it is the same carboxylic acid, the acidity varies depending on what substituents are present on the surrounding carbon.

For example, what happens if one chlorine atom, a halogen, is bonded to acetic acid (CH3COOH)? In this case, the result is as follows.

The electrons are pulled by the halogen, and as a result, the chloroacetic acid is more acidic than the carboxylic acid.

The effect of the substituent pulling the electrons is an inductive effect. This effect is responsible for the strength of the acidity. Of course, the more halogens that are bonded, the greater the acidity.

As explained in the example of acidity, it also affects basicity in the same way. The inductive effect is related to the degree of basicity.

For functional groups with strong electronegativity, the inductive effect is involved in many cases. When an oxygen or nitrogen atom or a halogen is bonded to an alkyl chain, it causes an inductive effect and lowers the electron density.

All of these attract electrons by binding to the alkyl chain, causing the inductive effect. In functional groups with oxygen or nitrogen atoms or halogens, they are all electron‐withdrawing groups.

What is the extent of the inductive effect of the electron‐withdrawing group? Let’s understand that this is limited.

Although the inductive effect reduces the electron density, the range of influence is small.

-The More Carbon Atoms There Are, the Higher the Electron Density

For reference, the presence of carbon atoms increases the electron density. Unlike oxygen and nitrogen atoms and halogens, carbon atoms push out electrons. This is the opposite of electron‐withdrawing.

Therefore, if there are multiple carbon atoms bonded together, the electron density will be higher.

Resonance Effects Take Into Account the Delocalization of Electrons

Among these double bonds, the resonance effect has a strong influence on the orientation and acidity of aromatic compounds (compounds involving benzene rings). It is also responsible for the reaction rates of organic chemical reactions.

For compounds with conjugated structures, the resonance effect should be taken into account. Roughly speaking, we can think of resonance effects as those related to the reactivity of the benzene ring.

The Resonance Effect Is Stronger than the Inductive Effect

Because it is a nitrogen atom, there is a force that attracts electrons through the inductive effect. However, compared to the inductive effect, the effect of the delocalization of electrons due to resonance is much stronger. As a result, the amino group on the benzene ring becomes an electron-donating group.

How do we distinguish between the electron-donating and the electron-withdrawing group on the benzene ring? To do this, look for double (or triple) bonds in the substituents.

For example, the following substituents are involved as electron-donating groups on the benzene ring. 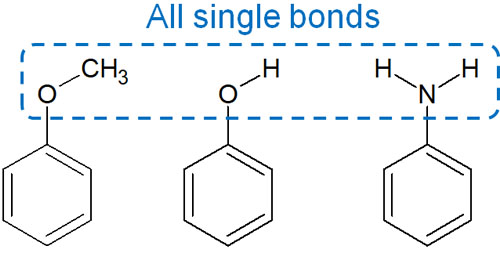 If we focus on the atoms directly bonded to the benzene ring (oxygen and nitrogen atoms), we find that they are all single bonds. As a result, these substituents are electron-donating groups on the benzene ring.

On the other hand, what if there is a double (or triple) bond in the substituent? In this case, they act as electron-withdrawing groups.

The presence of a double bond (or triple bond) allows electrons to be drawn into the substituent group by resonance. As a result, it becomes an electron-withdrawing group.

The Acidity of the Benzene Ring Depends on the Substituents

So why is it important to understand the resonance effect (R effect) in aromatic compounds? This is because it relates to acidity. Although the orientation (which part of the benzene ring causes the chemical reaction) also changes, we will focus on the acidity.

Even for the same aromatic compound, the acidity changes depending on the substituents. For example, phenolic compounds are listed in the following order of acidity.

Why does this difference appear?

Halogens attract electrons through an inductive effect. Therefore, it is understandable that they would be more acidic than phenol. Carbon atoms also push out electrons. Since a carbon atom is an electron-donating group, its acidity is lower than that of phenol.

On the other hand, what should we think of nitro and methoxy groups? These two functional groups should not be considered in terms of their inductive effects alone. Since the resonance effect is very strong, we need to consider the acidity by taking the resonance into account.

In order for phenol to be acidic, we can expect that the more stable it is after becoming an ion, the stronger the acidity will be. In this case, the nitro group (p-nitrophenol) resonates as follows.

Thus, after phenol becomes an acid, several resonance structures can be written. The electrons are also delocalized to the nitro group. The acidity of p-nitrophenol is high because of its stability when it becomes an acid. The presence of an electron-withdrawing group increases the acidity.

On the other hand, what about the presence of a methoxy group? The methoxy group in the aromatic ring acts as an electron-donating group. As a result, the acidity becomes lower, contrary to the previous example.

In the case of resonance with the methoxy group providing electrons, the result is as follows.

The negative and negative charges repel each other. This means that the resonance structure is unfavorable, considering that phenol shows acidity when it becomes an ion. For this reason, the presence of an electron-donating group in the benzene ring reduces its acidity.

-Resonance Effect Changes the Orientation of Ortho, Meta, and Para

It is not only the acidity that is affected by the resonance effect, but also the orientation. Orientation is a tool for predicting which part of the benzene ring will undergo an organic chemical reaction. 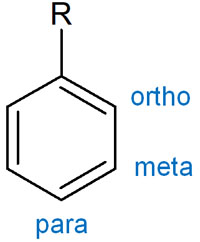 These are also affected by the resonance effect (R effect).

Electronegativity and Resonance Contribute to the Stability of the Compound

Molecules have various substituents attached to them. Depending on the type of functional group, the molecule will have different properties.

The most obvious one is the inductive effect (I effect). The higher the electronegativity, the more electrons the substituent attracts. As a result, the acidity of the molecule will differ. The difference in acidity is very important because it causes not only a difference in the strength of acidity and basicity, but also a difference in reactivity.

The resonance effect is stronger than the inductive effect. So, depending on what substituents are on the benzene ring, the acidity and orientation of the molecule can vary greatly.