One of the organic chemical reactions that occur for alkenes (double bonds) and alkynes (triple bonds) is an addition reaction. 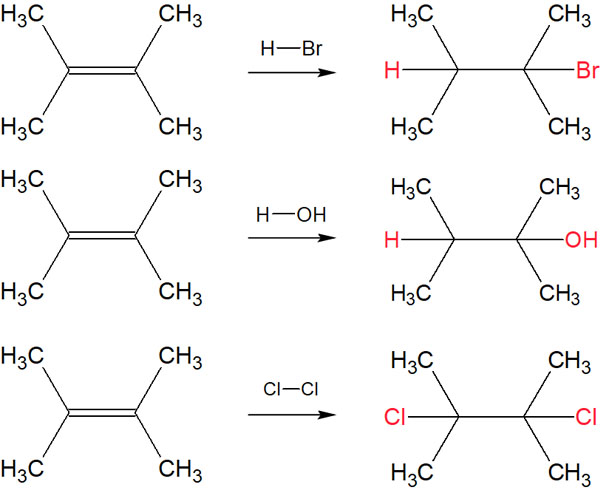 Reaction Mechanism of Addition Reactions to Alkenes with HX (HBr)

X stands for halogen. Therefore, understand that HX is HCl (hydrogen chloride) or HBr (hydrogen bromide). HBr is frequently used as an example, especially in addition reactions to alkenes.

Double and triple bonds are rich in electrons, as mentioned earlier. Double bonds are formed by π bonds (π-electrons); π bonds are weak bonds and can give electrons to other molecules.

Halogens, on the other hand, are known as atoms with strong electronegativity. Therefore, when a hydrogen atom is attached to a halogen, the molecule becomes highly polarized. HCl (hydrogen chloride) and HBr (hydrogen bromide) have both positive and negative charges in the molecule.

The hydrogen atoms in HCl and HBr are electron-deficient because electrons are attracted to the halogen, which means that they are strongly seeking electrons. Since HCl and HBr are deficient in electrons, they can be considered electrophiles.

These electrophiles and alkenes react chemically with each other. Specifically, the π-electrons forming the double bond attack the hydrogen atoms (electron-deficient atoms). Then, a proton (hydrogen) is added to the alkene. As a result, a carbocation is produced as an intermediate.

For example, when an alkene reacts with hydrogen bromide, the result is as follows.

Then, the bromide ion that was just produced attacks the carbocation. The bromide ion produced is negatively charged and also has unshared electron pairs (lone pairs). In other words, it has a lot of electrons.

In contrast, the carbocation is positively charged and requires electrons. Therefore, the bromide ion attacks and adds to the carbocation. Thus, an alkyl halide compound is formed.

The addition reaction of HX to alkenes proceeds in this way. In order to make it easier to understand, we used symmetrical alkene in the previous explanation. However, in the case of an asymmetric alkene, multiple compounds seem to be generated.

For example, in the following case, which compound will be produced? 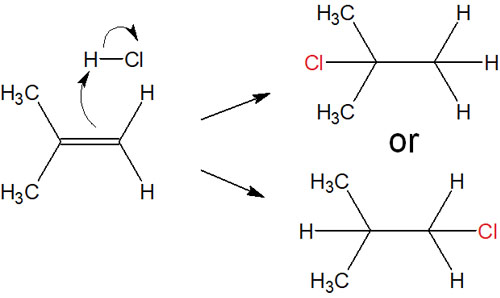 For this problem, there is a rule for compounds produced by electrophilic addition reactions to alkenes. In the addition reaction, the hydrogen is added to the carbon atom with fewer alkyl groups. This rule of thumb is called Markovnikov’s rule (Markovnikov addition).

Why does Markovnikov’s rule occur? The reason for this is the carbocation of the intermediate. The carbocations have an order of stability, as shown below.

Checking the previous addition reaction, the intermediate is shown below.

-A Rule Different from the Saytzeff Rule

Proton Transfer in the Carbocation Rearrangement

Understanding the stability of the carbocation also helps us to understand other organic chemical reactions. We can understand why carbocation rearrangement occurs in addition reactions as well as Markovnikov’s rule.

When an addition reaction occurs for a double bond, a proton (hydrogen atom) can be transferred to a neighboring carbon atom. This is called a carbocation rearrangement. As a result of the proton transfer, different compounds can be produced.

An example is the following organic chemical reaction.

When an addition reaction occurs according to Markovnikov’s rule, it would seem that only the secondary product shown in the above figure would be produced. In reality, however, a different compound is produced. Why does this kind of organic chemical reaction occur? The reason for this is the carbocation rearrangement. 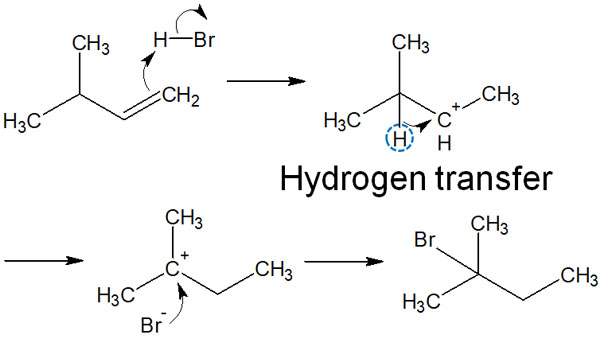 The main product can then be obtained by the attack of the halogen on the tertiary carbocation.

Addition of Water to Alkenes (Hydration)

However, water is a weak acid and cannot produce carbocation. In other words, the addition of water (hydration) to alkenes does not occur. Therefore, by adding sulfuric acid (H2SO4) as an acid catalyst, the water addition reaction can proceed.

In the presence of an acid catalyst (e.g., sulfuric acid), oxonium ions (H3O+) are generated. Oxonium ions are strong acids, so they can give H+ to alkenes. 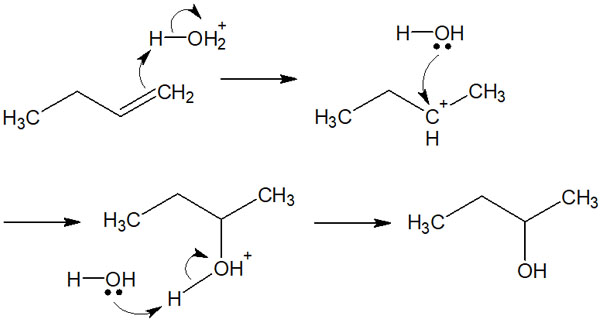 If we understand what we have learned so far, we can understand that the reaction mechanism is almost the same for both the addition reactions of HX and water. In the case of water, an acid catalyst is required. 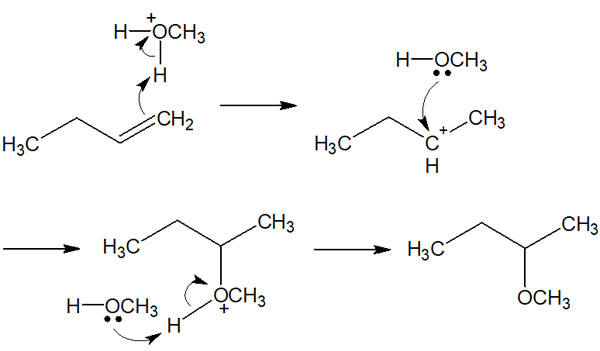 Once you understand the addition reactions to alkenes, you will be able to synthesize many compounds. By changing the reagent to be reacted with, you can change the product obtained.

We have discussed chemical reactions that follow the Markovnikov addition. In all of these synthetic reactions using water and alcohols, Markovnikov’s rule takes precedence, and therefore, multi-substituted alkanes are synthesized. However, is it possible to synthesize alkanes with fewer substituents?

What kind of chemical reaction is hydroboration, which is an anti-Markovnikov rule? Hydroboration refers to the addition of borane (BH3) to an alkene.

Borane is known to be a Lewis acid. Boranes have an unoccupied orbital and can accept electrons. Borane is a Lewis acid and is a powerful electrophilic reagent that accepts electrons present in the double bond of alkenes.

However, when borane is added to an alkene, an opposite addition reaction to the Markovnikov addition occurs. It looks like the following.

When the borane undergoes an addition reaction, the intermediate carbocation is not produced. Therefore, the stability of the carbocation is irrelevant, and the reaction becomes the anti-Markovnikov rule.

After the addition of a borane by the anti-Markovnikov rule, hydrogen peroxide (H2O2) is used to oxidize the alkylborane.

The bromide ion then attacks from the other side. This allows the synthetic reaction to proceed by anti-addition rather than syn-addition. Since the halogen ion attacks stereoselectively, we must take stereochemistry into account.

As mentioned above, no intermediates of the carbocation are formed. Therefore, the addition of halogens does not cause a carbocation rearrangement.

-When a Chiral Center Is Created, Stereoselectivity Is Important

It is important in stereochemistry that the addition reaction by halogen is anti-addition. When a chiral center is formed as an optical isomer, we have to consider what kind of shape the molecule will be.

On the other hand, in the addition reaction with halogens, as mentioned above, only anti-addition occurs. Therefore, no racemization occurs and only a specific compound can be obtained, even if there is a chiral center.

In these syntheses, water or alcohols (methanol, ethanol, etc.) are used as solvents, for example. In this way, the water or alcohol, rather than the bromine ion, will attack the intermediate to give the alcohol. 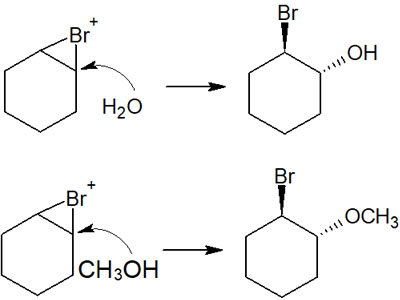 As a solvent, there is a very large amount of water (or alcohol) in the surroundings of the compound. So it is more likely that the solvent will nucleophilic attack rather than the low concentration of bromine ions. This is why we are able to obtain these compounds.

In addition, when we consider stereochemistry, the synthesis of alcohols by hydroboration and oxidation is understood to be syn-addition. When a borane is used in the synthesis, it causes syn-addition without a carbocation intermediate. Subsequently, the alcohol is obtained by oxidation.

Another addition reaction, catalytic reduction with hydrogen, is known to be a syn-addition.

In catalytic reduction, the air is filled with hydrogen, and carbon palladium is added to the solution to cause the reduction reaction. The hydrogen is adsorbed on the palladium carbon, and at this time, syn-addition occurs. 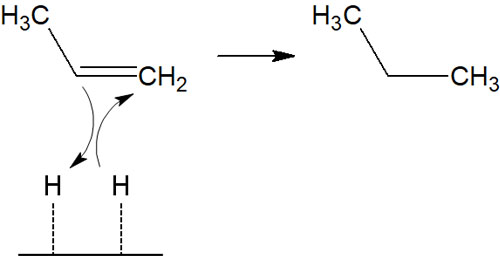 Since only syn-addition proceeds, racemization does not occur even in the presence of a chiral center. Also, the hydrogen addition reaction proceeds without the carbocation intermediate.

In the absence of a chiral center, there is no need to take into account the difference between the syn-addition and anti-addition reactions. However, if a chiral center is formed after the reaction, stereochemistry is important.

Learn Why Addition Reactions of Alkenes Occur and Regioselectivity

There are many types of reactions. In addition, you need to understand Markovnikov’s rule and the difference between syn-addition and anti-addition. Furthermore, you should learn even regioselectivity. However, the reaction mechanisms are all similar.

Try to understand how each addition reaction proceeds.