In organic chemistry, it is important to determine the state of the electrons. This is because the movement of electrons causes reactions to occur between organic compounds.

However, when studying organic chemistry in advanced academic institutions such as universities, there is one thing that many people do not understand: electron orbitals. This is because the concept of electron orbitals is completely different from what we learn in high school, and many people get confused.

The Electrons Don’t Revolve Around the Atoms

Most people have the following image. 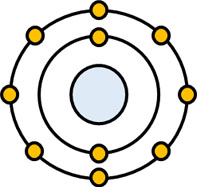 But this is not correct. Unless we forget this image, we cannot properly understand electron orbitals, such as s orbitals and p orbitals.

But overall, there is a high probability that the electron in the hydrogen atom is in the K-shell.

Instead of revolving around an atom like a planet, it is better to think of electrons as a cloud. Something like a cloud exists, and electrons exist inside this cloud. Because of the probability of the existence of electrons, in some cases there may be no electrons in the electron orbit.

Electron orbitals (where the probability of the existence of electrons is high) can be classified into s and p orbitals. Each orbital can have two electrons in it. 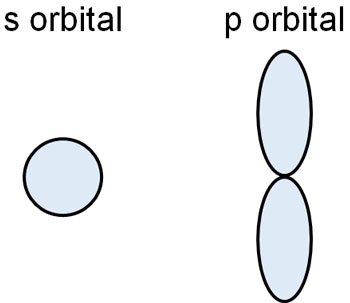 The s-orbital is shaped like a sphere. Let’s assume that there is an electron somewhere in the s-orbital (inside the sphere). In the case of molecular hydrogen (H2), two s orbitals are bonded together to form a hydrogen molecule.

On the other hand, the p-orbitals are similar to the number 8. There is only one s-orbital, but there are three p-orbitals. Consider that they are divided into three directions, as shown below.

The K-shell possesses only s orbital. Therefore, there are two electrons in the s orbital. The L-shell, on the other hand, has one s-orbital and three p-orbitals. A total of eight electrons can be placed in the L-shell. 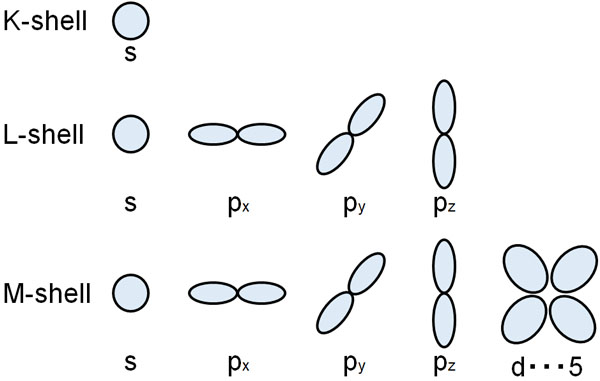 Note that in the M-shell, there are not only s and p orbitals, but also d orbitals. However, we rarely consider d-orbitals in organic chemistry, so we only need to understand s and p orbitals at first. Forget about d orbitals, although they do exist.

What Is Hybridization? How to Identify Hybrid Orbitals and Their Energy

Once you understand the concepts of s and p orbitals, you can move on to the next step in electron orbitals. You can learn about Hybridization.

When comparing s- and p-orbitals, the energy is lower in the s-orbit. For this reason, electrons first enter the s-orbital instead of the p-orbital. For example, a carbon atom has six electrons. If we consider the order of energy, the electrons enter the s orbital as follows.

But it’s hard to understand in this state: there are differences in energy between s and p orbitals, and electrons don’t exist in the same state.

In Hybrid Orbitals, s and p Orbitals Are Averaged and Considered the Same

By using hybridization, electrons are averaged. For example, a carbon atom has six electrons, so all the orbitals of the L-shell have electrons in them. 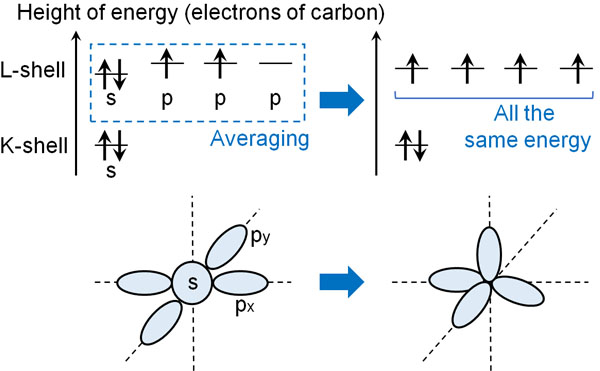 When understanding organic compounds, it’s easier to understand them by using hybrid orbitals and considering the s and p orbitals together. Because we assume they are the same, we can eliminate the complexity of the idea.

This is the concept of s orbital, p orbitals and hybrid orbitals. There is not only one hybridization, but three. They are as follows.

What is the nature of these hybrid orbitals? They are different in nature and must be clearly identified.

Just understand this. The details of each of these hybrid orbitals will be reviewed below.

sp3 Hybrid Orbitals: Compounds with Four Hands, Such As Methane and Ethane

Because of the four hands, you can distinguish that the carbon atoms in methane and ethane are sp3 hybrid orbitals.

In sp3 hybrid orbitals, there is one s-orbital and three p-orbitals. In order to remain stable, each of the four orbitals must point in a different direction. Since the electrons are negatively charged and repel each other, each orbital needs to be at its farthest away from the other.

As a result, the bond angles are 109.5° for the sp3 hybrid orbitals, respectively. 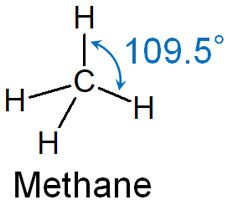 The electron orbitals that exist in this way are sp3 hybrid orbitals.

Adding an Unshared Electron Pair to the Hand: The Ammonia Example

An example is ammonia, which is frequently used as an example. The molecular formula for ammonia is NH3, and it has three hands extending from the nitrogen atom, each grabbing a hydrogen atom; because of the three hands, you would think that it is not an sp3 hybridization. 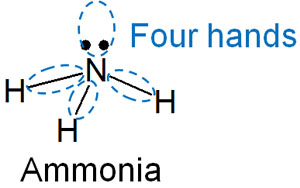 For example, sp2 hybrid orbitals are known to include ethylene (ethene), acetaldehyde, formaldehyde, and borane. 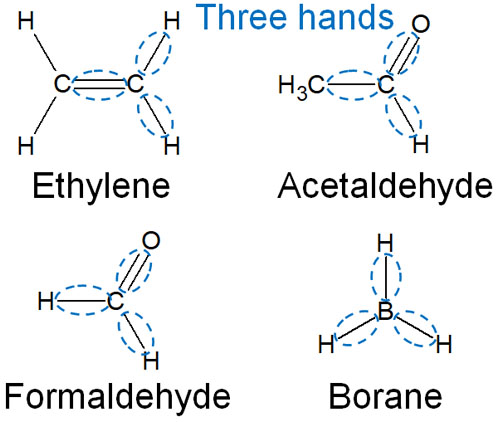 If we look at the carbon atom of ethylene, we see that it is bound to other molecules by three hands. The same is true for acetaldehyde, formaldehyde and borane.

If the atoms reach out three hands, they are positioned so that they have the most distant bond angles from each other. As a result, the sp2 hybrid orbital has a bonding angle of 120°. 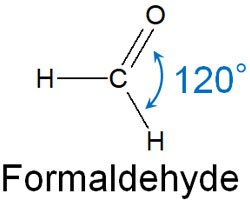 Each orbital is most distant and stable at 120°. In any case, understand that sp2 hybridizations are those that are bound to other molecules by three hands.

There are two hands from the carbon atoms of acetylene. From this situation, we can infer that it is an sp hybrid orbital. The same can be said for acetonitrile and allene.

In order for the two hands to be located at the farthest distance apart, they would have to be at 180° each. If the orbits exist in symmetrical positions, they will be able to take the most stable state.

Thus, understand that each atom has a different type of hybrid orbital.

All hybrid orbitals should be determined by how many hands they have.

So what exactly are these hybrid orbitals? For simplicity, we have focused on the number of hands that each atom has.

In the case of sp3 hybrid orbitals, they take the form of a tetrahedron. The bond angle is 109.5°, and the four orbitals take the farthest apart from each other. As a result, the orbits are naturally tetrahedron shaped.

These steric structures are determined by the type of hybrid orbitals.

Learn About s and p Orbitals, and Understand the Hybridization of Electrons

There are many people who have graduated from high school chemistry and want to learn more about chemistry. The s-orbitals and p-orbitals are the first concepts learned in any organic chemistry textbook. You will also learn hybrid orbitals.

However, the concept of electron orbitals is difficult. You need to forget what you learned in high school chemistry and you need to relearn new concepts. Also, there are energy differences between orbitals, and you have to use a non-existent tool called hybrid orbitals.

But if you learn one by one, you will be able to understand even the difficult concept of electron orbitals.