Every organic compound has a name. However, if you do not know the rules for naming them, you will not be able to find the compounds.

Even so, if you don’t understand the rules of compound names, you will have trouble when looking for the reagents you want. So let’s learn the basic rules needed to name a compound.

There Are Many Common Names, but Understand the Official Name

There are many common names for organic compounds; although they are not official names according to the IUPAC nomenclature, many people use them because they are widely used as common names.

Common names refer to a single substance. For example, the following compounds are famous for their common names. 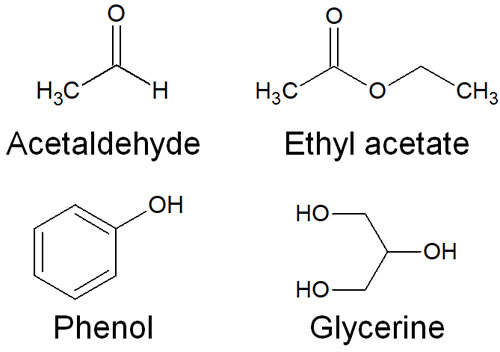 All of us who study chemistry have heard of these names. These are all common names and are not official names. However, many people use them, and no one uses the IUPAC nomenclature for these compounds.

The IUPAC Nomenclature of Organic Chemistry Has Rules

In the IUPAC nomenclature, compounds are named according to rules. The rules are as follows.

Name the compounds in this order. For example, suppose you have the following compounds.

The IUPAC nomenclature for 2-chloropentane can be broken down as follows.

You should understand that it will always be divided into three parts. This is a simple rule when considering compound names in the IUPAC nomenclature.

The Order in Which the Compounds Are Named

How should we name compounds using the IUPAC nomenclature? There is an order to this.

We will explain the specific ideas below.

When naming a compound according to the IUPAC nomenclature, the first thing you need to do is to find the parent structure of the compound. Organic compounds are made up of a carbon skeleton. Find the longest of these alkyl chains.

The longest chain of carbon is the parent structure. But in organic compounds, the carbon chains often branch out. So make sure you don’t mistake the main chain (parent chain).

For example, which is the longest carbon chain in the following compound?

When you look at the structural formula, you would think that the five-carbon chain is the parent chain, as shown on the left side of the figure. However, as you can see on the right, the six-carbon chain is the longest. In other words, the parent structure of this molecule is an alkyl chain with six carbon atoms.

Look at the entire molecule and try to figure out where the longest carbon chain is. Here’s how the name of the parent structure changes depending on the number of carbon atoms.

Look at the molecular skeleton and identify the longest carbon chain. For example, if you have a compound with seven carbons, you will find that you can use hept as the name of the carbon skeleton.

The rule is that the number should be as small as possible. For example, we can consider two different compound names in the following case.

In the IUPAC nomenclature, there is a rule to keep the numbers as small as possible. Therefore, the chloro group is in the second position, and 2-chloropentane is the correct name.

If There Are Multiple Substituents, Use Greek Numbers

What should we do if there are multiple substituents? If the same substituent is attached to the carbon skeleton, add a number to it. Use Greek numerals such as di and tri to indicate how many substituents are present.

The Greek numbers to use are as follows.

The location number of the substituent should be smaller. In addition to that, if there is more than one of the same substituent, it is represented by a Greek number. For example, it would look like this.

And what about the three fluorine groups in the second and third places for pentane? In this case, the compound shown in the above figure would be 2,3,3-trifluoropentane. In this way, Greek numerals are used to name the compounds.

Arrange the Substituents in Alphabetical Order

In contrast, it is common for different substituents to be attached to a compound. In that case, how should we think of the compound name? For this, let’s arrange them in alphabetical order. 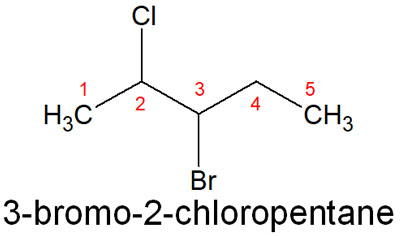 So far, we have discussed the IUPAC nomenclature for alkanes. In alkanes, the longest carbon chain is the main chain.

However, not only do they have single bonds, but they can also be alkenes (double bonds) or alkynes (triple bonds). What happens with these alkenes and alkynes? For this, the parent chain changes.

For example, think about the names of the following compound. 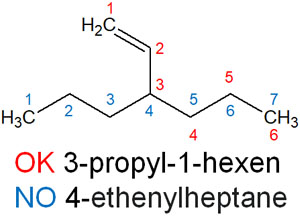 When considering the longest carbon chain, we must focus on the blue numbers. In this case, 4-ethenylheptane is the name of the compound.

However, this is not correct. You have to determine the main chain to contain more double bonds (or triple bonds). So, although the number of carbon chains is small, we need to focus on the red numbers to determine the parent chain. As a result, the compound name is 3-propyl-1-hexene.

In alkenes and alkynes, it is necessary to note where the double or triple bond is located. So, indicate the location of the multiple bonds with a number, such as 3-propyl-1-hexene.

For example, suppose you have the following compound. 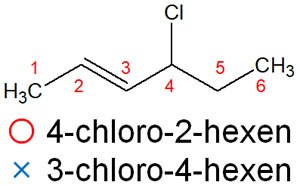 The Name of the Main Chain Depends on the Functional Group

There is no point in remembering these priorities; almost no organic chemist can accurately name them using the IUPAC nomenclature. And as mentioned above, the software can tell you the names of the compounds. Just as a matter of knowledge, you just need to understand that the priority is determined by the functional groups.

For example, suppose we have the following compound. 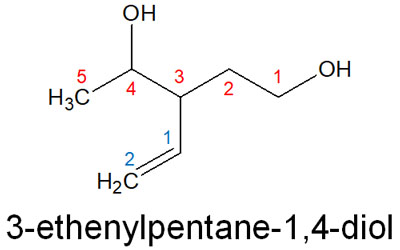 When comparing the double bond and the hydroxy group (-OH), the -OH has a higher priority. Therefore, the parent chain is the carbon chain to which the -OH is attached. As a result, the compound name is 3-ethenylpentane-1,4-diol.

Some cyclic compounds exist. Cycloalkanes and cycloalkenes fall into this category. The nomenclature of cyclic compounds is simple if you understand what we’ve discussed so far. All you have to do is add cyclo- to the beginning. For example, the following are examples.

Note that if there is only one double bond or substituent, there is no need to number it. This is because the compound is symmetrical and is the same compound without numbering. 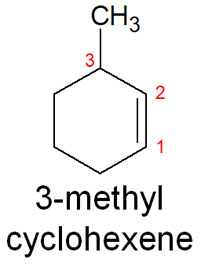 The order of preference and numbering of the substituents is the same as what we have explained so far. For cyclic compounds, just add cyclo- at the beginning.

This is how we come up with the parent chain based on the number of hydrocarbons and functional groups, and then we note the names of the substituents in alphabetical order. However, the presence of a double bond often produces a cis-trans. These have to be identified because of the cis-trans result in completely different compounds.

However, the cis-trans you learned in high school chemistry is powerless. It is not possible to identify the compounds. For example, it is unclear which of the following compounds is cis/trans. 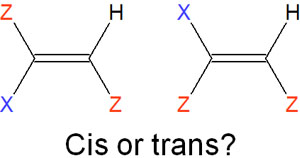 This is why the cis/trans nomenclature is ineffective. So we treat them as E/Z isomers. For the atoms attached to the double bond, we determine if they have a higher priority. This is as follows.

In the IUPAC nomenclature, we have explained the priority of the main chain, but in the E/Z isomers, the priority is determined by the size of the atomic number. Therefore, it is easy to determine. For example, suppose we have the following compound. 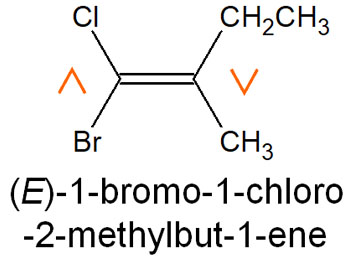 When comparing chlorine and bromine, the bromine atom has a higher atomic number.

Also, on the right side, the same carbon atoms are bonded together, but the ethyl group has a higher priority than the methyl group. Therefore, it is determined to be an E (trans); in IUPAC nomenclature, it is necessary to determine whether it is an E or Z.

Understanding How Compounds Are Named

In the IUPAC nomenclature, it is very difficult to predict the name of a compound with a complex structural formula. Also, each functional group has its own priority, and even double and triple bonds must be included. Therefore, many people draw the structural formula and then use the tool to figure out the name of the compound.

Therefore, there is no point in memorizing the IUAPC correctly and understanding it completely. However, it is essential that you understand the basics and be able to come up with the IUPAC names of simple compounds. Otherwise, you will not be able to search for reagents when performing organic synthesis.

Although you don’t need to memorize it hard at all, it is necessary to learn the knowledge of IUPAC nomenclature.