An important element in organic chemistry is optical isomers (chiral molecules). They are also called chirality, and even though they may appear to have the same structural formula, the presence of a chiral center results in a mixture of completely different compounds.

In organic chemistry, optical isomers must be clearly separated because they are completely different compounds. This is because having a chiral center changes the properties of the compound. Also, it is difficult to synthesize optical isomers separately.

So how do we think about chiral compounds?

The chiral carbon atoms have to be considered in stereochemistry. Here we will explain the basics of the properties and concepts of chiral compounds.

The two compounds that are in an optical isomeric relationship are called enantiomers. 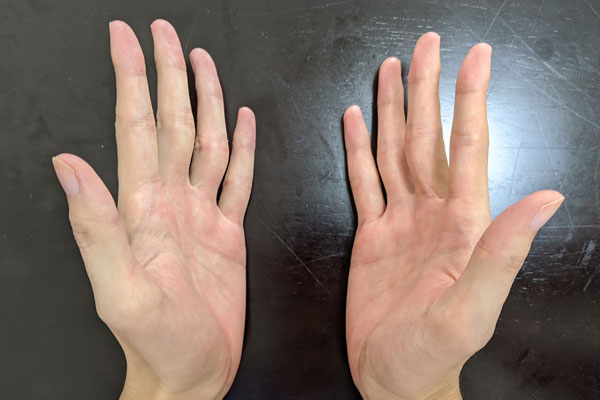 However, the right hand and the left hand cannot be completely superimposed on each other. It is impossible to try to create the same shape, as shown below. 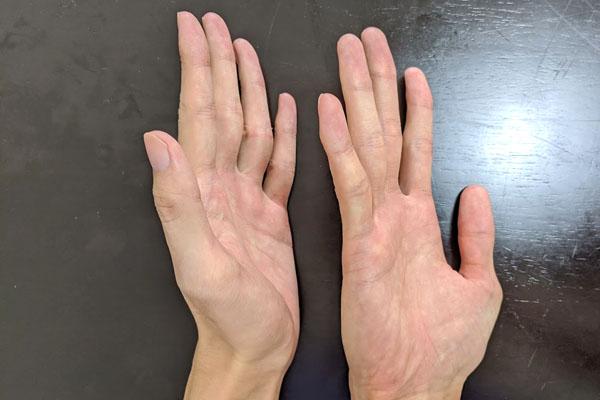 You have to realize that enantiomers have the same structural formula but are completely different compounds. By the way, a compound with a chiral center has chirality. On the other hand, if it is not a chiral compound, it is called an achiral.

Chirality is considered when there are four different substituents attached to a carbon atom. Therefore, in double or triple bonds, there is no chirality. Of course, in a double bond, cis-trans isomers must be considered. Cis-trans are different isomers than optical isomers, and they are not the same isomer.

How should these chiral compounds be described? For compounds with chiral centers, there are two ways to describe them. One is the Fischer projection, and the other is the dashed-wedge notation.

The Fischer projection is the way to describe the molecule in planar form, even if it has a chiral center. On the other hand, in dashed-wedge notation, the location of substituents is described in three dimensions.

For compounds with chirality, both methods are widely used. Therefore, you can use either method.

Specific Enantiomeric Synthesis Is Difficult and Results in Racemic Mixture

Why is it important to distinguish optical isomers in organic chemistry? It’s because different enantiomers have different properties.

The famous compound is thalidomide. In the past, thalidomide was sold as a sleeping pill. However, it has chirality, and while one has a sleeping effect, the other has a teratogenic effect on the fetus. As a result, it caused drug damage.

Each enantiomer has completely different bioactivity (i.e., functions in the body). Nevertheless, it is very difficult to synthesize only one of the enantiomers in organic chemistry. It is difficult to obtain one enantiomer (an optically active compound) selectively, and in most cases, it is racemized.

When two chiral compounds are mixed together equally, they are called racemic mixtures. With a chiral center, it is difficult to avoid the racemization of the compound.

-How to Separate Chiral Compounds

By using a special catalyst, only one enantiomer may be obtained instead of a racemic mixture.

Alternatively, the enantiomers can be separated by chromatography. Even when synthesized using a chiral active catalyst, obtaining a single enantiomer requires a high level of knowledge and skill. Therefore, chiral adsorbents are used to separate the compounds.

Meso Compound Have a Chiral Center but No Optical Activity

Is it always an optical isomer if there is a chiral center? In this regard, the presence of a chiral carbon atom does not always mean that there is chirality. In some cases, there is no optical activity.

In particular, if there are two or more chiral carbon atoms, there are cases where the material has no optical activity. This is called a meso compound.

When does a compound become one with no optical isomer in spite of the presence of a chiral center? For example, for 2,3-dibromobutane, four structural formulas can be written as follows. 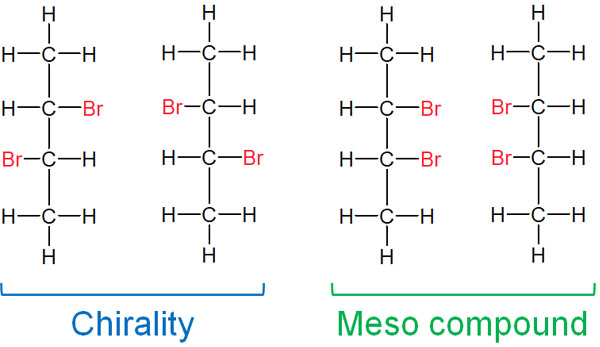 Because two substances can be superimposed, meso compounds can be said to have achiral properties. A compound with no optical activity is a meso compound.

DL notation is sometimes used to describe an optically active molecule. However, DL notation is a relative method. Therefore, in organic chemistry, it is common to use RS notation, which is an absolute notation, instead of DL notation.

For the RS notation method, follow the rules below.

For example, with the following molecule, the ranking would be as follows. 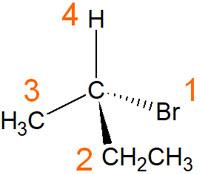 The highest atomic number in this molecule is the bromine atom. Also, the lowest ranking is the hydrogen atom.

In this way, the RS notation gives a ranking for each substituent.

After ranking, you need to decide whether it’s an R or an S. In RS notation, the following steps will help you decide.

For example, in the compound we just mentioned, the fourth substituent is a hydrogen atom. Because we need to put the hydrogen atom at the back, we have to look at the compound from the bottom of the molecule. 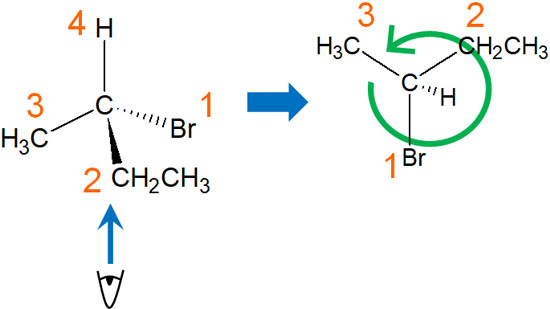 You need to imagine the three dimensions of the molecule in your mind. Or you can write it down on a piece of paper. Then you will be able to determine whether the ranking of the substituents is clockwise or counterclockwise. In the case of this molecule, it’s counterclockwise. Therefore, it is determined to be an S.

For reference, the EZ isomer in cis-trans is also ranked according to the atomic number to determine whether it is E or Z. As with EZ-isomers, the RS of chiral compounds is ranked using the same concept.

So far, we have explained the properties of compounds with chiral centers and RS notation. So what happens when there are two or more chiral carbon atoms in a molecule?

We have already discussed meso compounds. However, there are very few compounds that are symmetrical meso compounds, and most of them have chirality. So we have to understand the concept of diastereomers as well as enantiomers.

With two chiral centers, there are four patterns of isomers, as follows. 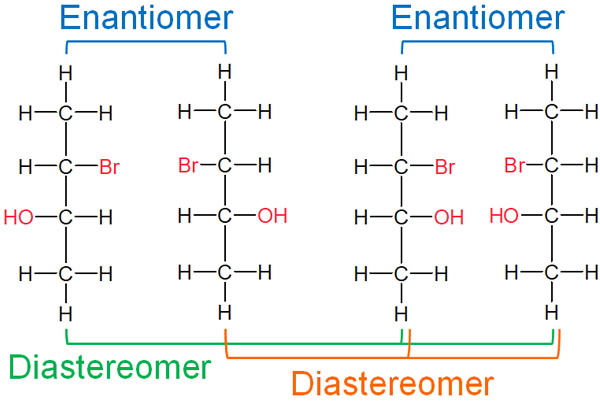 Enantiomers have the same physical properties, such as melting point and boiling point. Their chemical properties are also the same except for their optical rotation.

In organic chemistry, in many cases, molecules are described in planar form. However, in the real world, molecules exist in three dimensions. Therefore, we have to think in terms of stereochemistry.

One of the important areas of stereochemistry is optical isomers. By having a chiral center, they become optically active. This results in enantiomers. With the exception of their optical rotation and the bioactivity of pharmaceuticals, the properties of enantiomers are the same.

By understanding the nature of these optical isomers, our knowledge of stereochemistry can be deepened. It is difficult because you need to think of molecules in three dimensions, but you should be able to distinguish between these compounds.