One way to create a new carbon chain is through synthetic reactions using enolates. One of the organic chemical syntheses with enolates is Claisen condensation.

In order to obtain the target compound, you must select the right reagents and consider the reaction conditions. In this section, we will explain the reaction mechanism of Claisen condensation and some important points to keep in mind.

The Reaction Between Enolate and Ester Is the Claisen Condensation

In compounds with a carbonyl group, including esters, the hydrogen atom (alpha hydrogen) of the alpha carbon is easily pulled out by the base. The result is a change from a keto form to an enol form compound.

The base makes the molecule into an enol form. The enolate is an enol compound produced by the base. By adding a basic reagent to the ester, enolate can be synthesized as follows.

The carbon atoms of enolate are negatively charged. Because it is a carbanion, enolate is highly nucleophilic. Therefore, it can attack other carbonyl carbons and create new carbon bonds.

Enolate is a nucleophile that attacks esters by the following reaction mechanism.

Then, when the electrons in the oxygen atom return, the ester is released. The removal of water or alcohol to form a new molecule is called condensation. This reaction is a type of condensation and was discovered by the German chemist Claisen, hence the name Claisen condensation.

-What Is the Difference Between the Aldol Reaction?

Note that one equivalent amount of base is required for Claisen condensation. The aldol reaction, on the other hand, requires only a catalytic amount of base to proceed.

Are ketones not attacked by enolates after the formation of compounds by Claisen condensation?

The compounds synthesized by Claisen condensation are called β-keto esters. Ketones have a higher electrophilic property than esters. Therefore, it would seem that enolate makes a nucleophilic attack on the ketones of the β-keto ester, not the ester.

However, in fact, the product ketone (β-keto ester) does not react with the enolate. This is because the α-carbon of the β-ketoester is highly acidic.

Claisen condensation is a synthetic reaction under basic conditions. The presence of a strong base results in the formation of enolates. Because of the presence of a base in the solution, the hydrogen atom (α-hydrogen) bonded to the α-carbon of the β-keto ester is pulled out by the base. As a result, the following stable enolate ions are formed.

As a result of the change in form from the β-keto ester by the base, it is no longer subject to nucleophilic attack by enolate. Therefore, in Claisen condensation, the β-keto ester does not react with the enolate.

When the reaction is stopped, an acidic solution such as hydrochloric acid is added. After the acid-base reaction, the enolate returns to the form of the β-keto ester.

When two esters exist in a molecule, they are cyclized by intramolecular Claisen condensation. This reaction is called Dieckmann condensation.

The reaction mechanism is exactly the same as that of Claisen condensation. However, the name of the reaction changes depending on whether the condensation occurs between two ester molecules or within a molecule.

If these conditions are met, Dieckmann condensation proceeds by the following reaction mechanism. 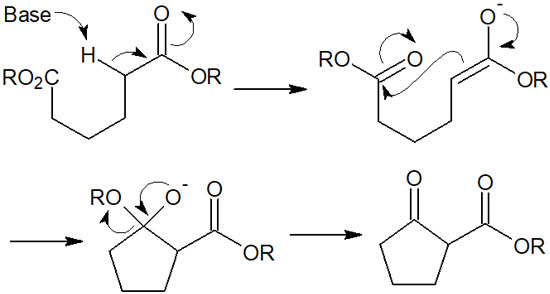 If you understand the reaction mechanism of Claisen condensation, Dieckmann condensation is easy to understand. Under base conditions, β-keto esters can be synthesized by cyclization in intramolecular reactions.

-Alkylation with Alkyl Halides Is possible

In addition, as mentioned above, the β-keto ester exists as a stable enolate because it is reacted under basic conditions. Therefore, it can be alkylated by reacting with alkyl halides before adding the acid.

For example, the following.

Even though the reactivity is lower because it is a stable enolate, it still has nucleophilic properties because the carbon atom is negatively charged. Therefore, after proceeding with the reaction by Claisen condensation (or Dieckmann condensation), it is possible to create a carbon chain by alkylation.

In crossed Claisen condensation, the following reactions are used. 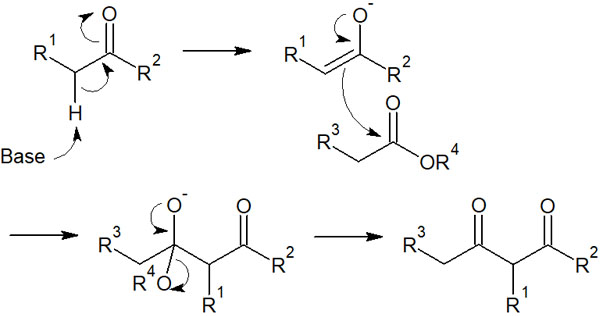 There is a point of caution when performing crossed Claisen condensation. That is to use an ester without α-hydrogen.

To get an enolate, the molecule must have alpha hydrogen; the proton attached to the α-carbon is pulled out to synthesize the enolate. However, if both compounds to be reacted have α-hydrogen, various kinds of enolates are produced, and the reaction is complicated.

Therefore, it is necessary to react to esters so that the base pulls out only one alpha hydrogen. For example, in the following reaction between esters, there is only one α-hydrogen.

With the Use of Sodium Hydroxide, It Becomes Carboxylic Acid and Can Decarboxylation

The use of sodium hydroxide (NaOH) as a base used in Claisen condensation is rare.

It is possible to synthesize enolate by using sodium hydroxide. Nevertheless, why is NaOH rarely utilized in Claisen condensation? The reason for this is that OH– attacks the ester, which results in the synthesis of carboxylic acids.

In this way, compounds with a carbonyl group (ketone) in the third position of the carboxylic acid are synthesized.

If you want to obtain a carboxylic acid or perform decarboxylation after the Claisen condensation, you can use sodium hydroxide. But otherwise, NaOH will not be used as a base.

So, is it enough to use any other base? For example, sodium methoxide and sodium ethoxide are known to be bases.

However, there are few opportunities to use alkoxide as a strong base. This is because when sodium methoxide or sodium ethoxide is used, methoxide or ethoxide are formed through transesterification. It is as follows.

-The Use of LDA or NaH Is Common

LDA is a bulky base, as shown below. 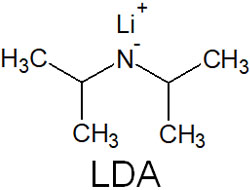 Use of Enolates and Claisen Condensation

When making new carbon bonds in organic chemistry, chemical reactions that utilize enolates are important. There are several synthetic reactions using enolates, such as aldol reaction and Michael addition, and one of them is the Claisen condensation.