After learning multiplication, we will study integer division in elementary school arithmetic. 1, 2, 3, etc., are integers, and we use these numbers to do calculations.

In this section, we will explain how to calculate division in elementary school math.

When we do division, we use the symbol ÷. In integer division, the following calculation is used.

What does this mean? $12÷3$ means how many you get when you divide 12 by 3. For example, there are 12 cakes, and we divide them into three pieces. Then you can divide it into four parts. 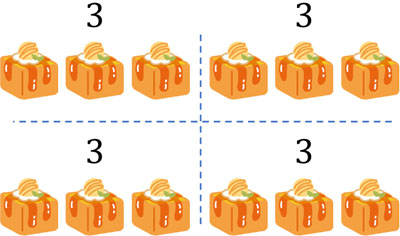 The division is used to split numbers.

This question can be changed as follows.

There are cases that we cannot divide by an integer when doing division. For example, the following equation is an example of this.

When doing division, if you can’t divide a number, you can use the remainder. The remainder is the number that remains after dividing. For example, in the case of $20÷3$, the answer is 6, and 2 is the remainder.

In this case, 2 is called the remainder. There are many cases that the number is not dividable, so the remainder is often used.

The remainder must always be smaller than the divisor. For example, let’s do the following calculation.

It is important to note that the answer is not 2 R 6. In this answer, there is a remainder of 6 even though the divisor is 4. 6 (remainder) is a larger number than 4 (divisor), so the answer is wrong.

How to Divide Using Long Division: Two-Digit and One-Digit Numbers

After learning how to do division, you should be able to do long division. As with multiplication, long division can be calculated by writing it down. For example, let’s do the following calculations.

In long multiplication, write the following. 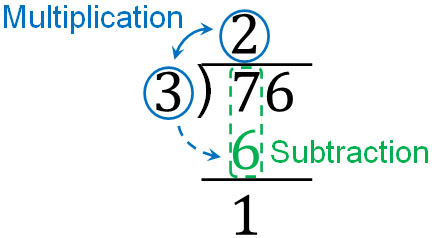 By subtracting, we can write down the remainder, which is 1.

The next thing we need to do is to calculate the remaining number: 6, which is the ones place out of 76. So, let’s write down 6 as follows. 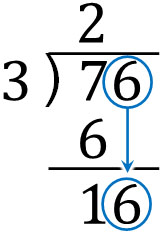 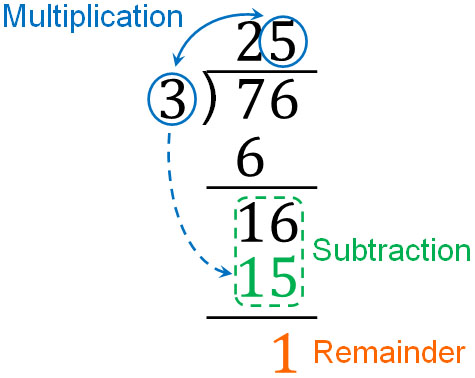 Thus, the answer is 25 R 1. In long division, the remainder appears at the bottom.

How do we divide two digits by two digits? Let’s try to solve the following math problem.

When you do the division, do it in the same way as before. Write it as follows.

What should we multiply by for 12? Since $12×4=48$, we can multiply by 4. You need to predict what number you should multiply by. The result is as follows. 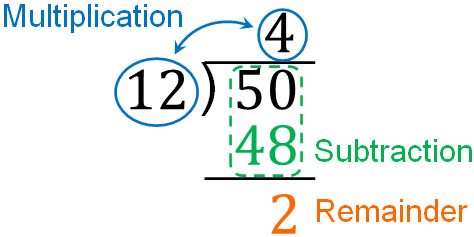 Thus, the answer is 4 R 2. Note that 2 (remainder) is less than 12 (divisor), so the answer satisfies the condition.

The way to do the calculation is the same. Let’s create the following equation. 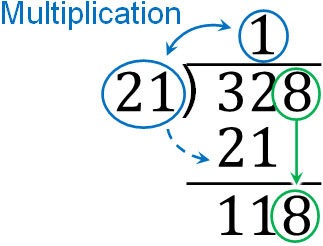 The next calculation is $118÷21$. What do we need to multiply 21 by to get the answer? This is a bit difficult to answer. So, let’s take a guess and come up with a random answer. If we multiply by 21, we get the following.

Thus, we found that the answer to $328÷21$ is 15 R 13. For numbers with large digits, the calculation of division is a little more complicated. So, let’s calculate them while predicting what numbers you should use.

Calculating the Division for Integers: Remainder and Long Division

In elementary school arithmetic, we learn division. Division means the same thing as doing multiplication. The division is also a multiplication problem. It is important to think about what numbers you need to multiply to get the answer.

However, unlike multiplication, the division can have a remainder. There are many calculation problems that you can’t divide, and in such cases, you need to find the remainder. The remainder must always be smaller than the divisor. It is important to understand this property.

In addition, when dividing a number by large digits, we need to use long division. There is a way to do this, so let’s learn how to do it.