When adding or subtracting integers, an important number is 10. By finding the number 10, you will be able to calculate carry and borrow.

In this section, we will explain how to do the addition and subtraction of integers.

Find the Numbers That Add Up to 10

In mathematics, the following numbers are called integers.

When adding these numbers, if there is no carry-over, you can calculate them without difficulty. The result is as follows.

So, how do we calculate adding with carrying? For example, the following calculation.

The answer is as follows.

Try to remember all the answers to each of these. If you don’t know which number to add to make the number 10, you won’t be able to calculate addition with carrying. 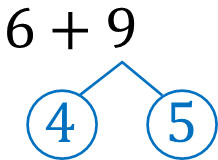 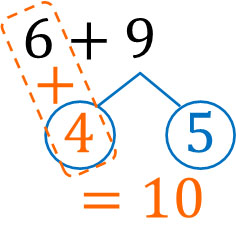 Finally, add the remaining 5. This gives us 15 as the answer. To review, let’s calculate addition with carry as follows.

If you can’t come up with what to add to the number on the left to make 10, you can’t calculate addition with carrying. Therefore, try to memorize all the numbers that add up to 10.

Adding Two Digits and One Digit

How do we add two-digit numbers by one-digit numbers? The idea is the same as before: find a number that adds up to 10.

For example, let’s do the following calculation. 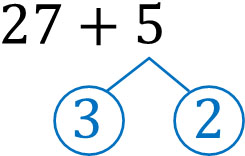 If we add 3 to 27, we get 30. Also, by adding the remaining 2, the answer is 32. The way of thinking is the same as in the previous example. In any case, let’s find a nice round number and do the calculation.

After learning addition, we need to understand subtraction. In subtraction with borrowing, we need to think about it in the same way as we did with addition. In other words, you need to find the nice round number, such as 10, 20, or 30.

What number should be subtracted from 54 to get the round number? If we subtract 4 from 54, we get 50. So, we can see that we should split 9 as follows. 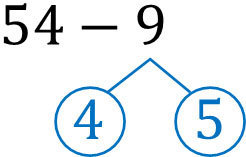 We can split 9 into 4 and 5. After that, let’s calculate as follows.

This calculation has the same meaning as the following.

When calculating $54-9$, it is easier to calculate if you split the number. Use this method for both addition and subtraction.

Long Addition in Arithmetic with Two or Three Digits

How do we calculate addition with two or three digits, which is much more complicated than adding one digit?

For example, how do you calculate the following?

When calculating long addition (or column addition), the first thing we need to do is calculate the ones place. If we add 7 and 5, we get 12, and the ones place in 12 is 2. So, let’s write 2 in the ones place. 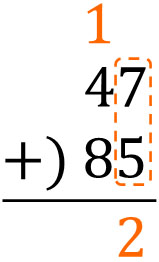 After that, add all tens place. The result is as follows. 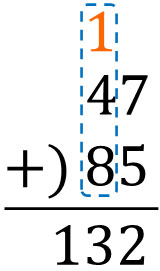 Thus, we know that the answer is 132. Here is a review of how to calculate the long addition.

After calculating the ones place, let’s calculate the tens place.

What should we do when we want to add three digits instead of two? In this case, the method is the same as before. For example, how should we do the following calculation?

In the two-digit calculation, we first calculate the ones place. The same is true for the three-digits, calculating the ones place, tens place, and hundreds place in order.

For example, let’s do the following calculation.

The equation to create is as follows.

As with addition, after calculating the ones place, let’s calculate the tens place. The result is as follows. 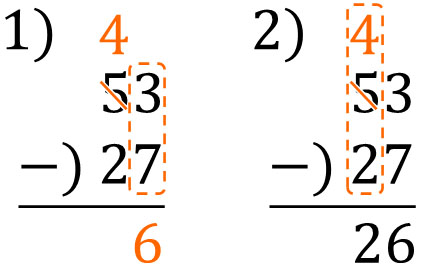 The next calculation is in tens place. However, 53 is lending us 10. Therefore, the tenth place is 4 instead of 5. Subtracting 2 from 4 in the tenth place will give you the answer.

In this calculation, 53 is split as follows. 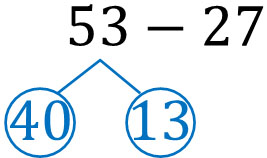 First, let’s make an equation for long subtraction. It will look like this.

Calculating with Carrying and Borrowing

So, let’s understand how to do the calculations. When calculating two digits and one digit, it is a good idea to find the round number; 10, 20, or 30 are all round numbers. Using the round number will allow you to calculate including carry or borrow.

There is a method to addition and subtraction. Make sure you understand how to solve problems involving carry and borrow.