If you understand the properties of functional groups, you will be able to understand how to make chemical reactions. And an important functional group in organic chemistry is the amine. There are so many molecules with amines, and it is one of the most common substituents.

Amino groups are known to be basic substances and act as nucleophiles. Therefore, they are used in nucleophilic substitution reactions, but they can also be used as leaving groups. Amino groups can undergo special elimination reactions to synthesize alkenes.

Another functional group that is important in nucleophilic substitution reactions and elimination reactions, just like amines, is thiols. Since the types of organic chemical reactions are similar, learning about them at the same time as amines will help you to understand the properties of thiols more efficiently.

Properties of Amines and the Relationship between Amino Groups

First of all, what is an amine? An amine is a functional group in which the hydrogen atom of ammonia (NH3) is replaced by alkyl chains. Understand that if the alkyl chains are bonded to nitrogen atoms, it is an amine.

Generally speaking, -NH2 is called an amino group. However, -NH2 is not the only amine. When more than one alkyl chain is attached to a nitrogen atom, it is also called an amine.

Also, since amines are generally basic, they produce cations by pulling out H+ (protons). These amines are basic when they are converted to ammonium cations.

For example, in aniline, the following resonance structures can be written.

Amino Groups Are Important as Nucleophiles

What kind of synthetic reactions are amino groups used for? In the most common organic synthesis of amines, the amino group is used in nucleophilic substitution reactions.

Most of the basic compounds are nucleophiles. By attacking other molecules, they are able to create new bonds. This means that compounds with amino groups are often used as nucleophiles.

For example, the following quaternary ammonium salts can be synthesized using tertiary amines.

Quaternary ammonium salts are used in many situations, such as disinfectants and anion exchange resins. Therefore, it is one of the most widely used substituents in our daily life.

Thiols are also known as nucleophiles. Thiols have a mercapto group (-SH). The presence of mercapto groups is known to give off a bad smell.

Thiols have similar properties to alcohols (-OH), but they are known to be very strong nucleophiles. They are also more acidic than alcohols. Therefore, unlike amines, they are weakly acidic in an aqueous solution. However, they are used as excellent nucleophiles.

Nucleophilic substitution reactions with thiols can create sulfide bonds (-S-). It is as follows.

When the molecule is connected to an oxygen atom, the functional group is called ether. On the other hand, when carbon chains are connected by a sulfur atom, it is called a sulfide.

We explained that amines could make quaternary ammonium cations. In the same way, a sulfide can make anions by a nucleophilic attack—for example, the following.

The ether does not nucleophilic attack. On the other hand, sulfur atoms are highly nucleophilic, so the sulfide attacks the compound and produces a cation.

The Quaternary Ammonium Cation Acts as a Leaving Group

Normally, amines cannot be used as a leaving group. It is important to understand that the following amines will not cause an elimination reaction.

When a base is added, the hydrogen (proton) is withdrawn rather than undergoing an elimination reaction. This is why these substituents do not become leaving groups.

Amines are commonly known as basic substances. Therefore, even if you add a stronger base, the proton bound to the conjugate acid (which is positively charged) will just disappear. Also, amines have an extremely low ability to leave out, so they are not leaving groups.

Therefore, when quaternary ammonium salts are present in the molecule, the addition of a strong base causes elimination reactions. It is as follows.

Quaternary Ammonium Cations Cause the Elimination Reactions by Hofmann Elimination 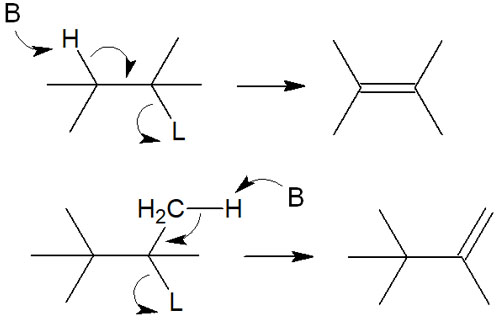 In general, the elimination reaction follows the Saytzeff rule. The base attacks the hydrogen atoms attached to the substituent-rich carbon atoms to produce polysubstituted alkenes.

However, in the case of molecules with quaternary ammonium cations, compounds do not follow the Saytzeff rule. When a double bond is formed by the elimination reaction, the proton attached to the carbon atom with fewer substituents is withdrawn. This is Hofmann elimination, and the reaction mechanism is as follows.

The reason why Hofmann elimination occurs instead of the Saytzeff rule is that the quaternary ammonium salts are extremely bulky. Due to the steric hindrance, the base cannot get inside the molecule. Therefore, the hydrogen atoms on the outside of the molecule are pulled out, causing the elimination reaction.

Sulfide Becomes a Leaving Group in the SN2 Reaction

If it is positively charged as an ion, it can become a leaving group. Since the functional group is activated, the addition of a base (nucleophilic agent) allows the synthetic reaction to proceed.

For sulfide, it is used as a leaving group in the SN2 reaction. The nucleophilic agent attacks it, causing the following reactions.

Unlike quaternary ammonium salts, sulfides are not suitable for elimination reactions (formation of alkenes). Therefore, it is better to use them when you want to synthesize products by using nucleophilic substitution reactions rather than creating a double bond.

Learn the Properties of Amines and Thiols

On the other hand, it is possible to make quaternary ammonium compounds from amines. For sulfides, we can also synthesize positively charged ions. When activated by a positive charge, they can act as a leaving group.

For amines, we can synthesize alkenes with double bonds by Hofmann elimination. For sulfides, a nucleophilic substitution reaction can occur by the SN2 reaction.

Amines and thiols have these properties. They are not difficult properties, so make sure you understand how synthetic reactions occur.