There are different types of carboxylic acid derivatives, such as acyl chloride, acid anhydride, esters, and amides. Each has different reactivity and stability, so the synthetic reactions are different.

We will explain how to proceed with synthetic reactions using carboxylic acid derivatives, including the reaction mechanisms.

In organic chemistry, each functional group has its own characteristic synthetic reaction. Nucleophilic acyl substitution reactions occur, especially in the case of carbonyl compounds with leaving groups. 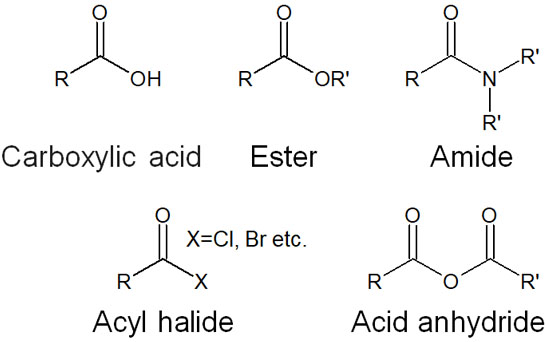 All of these compounds can be synthesized from carboxylic acids.

As the nucleophile (Nu) attacks, the leaving group (L) moves away. As a result, a new compound is obtained.

Nucleophilic Addition Reaction in the Absence of Leaving Groups

It is important to note that there are often no leaving groups in carbonyl compounds. Carbonyl groups (ketones) and formyl groups (aldehydes) are examples of this. 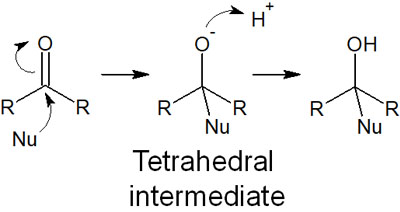 After the reaction, the acyl groups disappear. Understand that when a nucleophilic attack occurs on the acyl group, a different synthetic reaction will proceed in the absence of the leaving group.

In acyl groups, an oxygen atom is attached to a carbon atom. Moreover, since C=O has a double bond, the electrons move, as shown below.

This means that when a nucleophilic reagent attacks the carbonyl carbon, electrons are always transferred to the oxygen atom. Let’s understand that when a nucleophilic attack occurs on an acyl group, the carbonyl carbon is attacked in all synthetic reactions, and then electrons are transferred to the oxygen atom.

Therefore, the carbocation is not produced by the release of the leaving group as in the SN1 reaction. Also, the leaving group does not leave simultaneously as the nucleophile attacks, as is the case in the SN2 reaction. In other words, the following reactions do not occur. 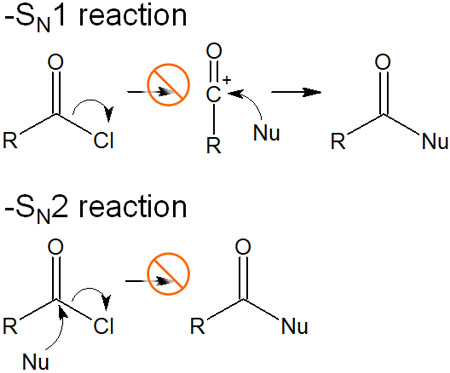 Even though the same nucleophilic reagent is used in the synthesis, the reaction mechanism is different. The movement of electrons changes depending on whether an acyl group is present or not.

Stability (Leaving Capacity) Varies with the Shape of the Carbonyl Compound

The reactivity of carboxylic acid derivatives is in the following order.

-The order of reactivity

In short, acyl chloride has the lowest stability and is the most reactive. Amides, on the other hand, have low reactivity. For reference, the reactivity of esters is equal to that of carboxylic acids.

On the other hand, in an amide, the nitrogen atom can make a double bond by pushing out electrons. The contribution of the resonance structure is significant, and the delocalization of electrons makes the molecule stable.

Due to these differences, the reactivity and stability of the carboxylic acid derivative differ.

Consider Reactivity in the Order of Stability

Why is it important to understand the stability of these compounds? It is because we can understand what products will be produced when the compounds are reacted.

For example, when salicylic acid reacts with an acid anhydride, which of the following compounds will you get?

In the synthesis of compounds, the reaction usually proceeds from an unstable state to a stable state. Therefore, in this reaction, only the compound with the ester group will be obtained.

Reactivity of Each Carboxylic Acid Derivative

We will explain how these carbonyl compounds are reacted and synthesized.

Acyl chlorides React with Most Compounds

One of the most beneficial compounds in carboxylic acid derivatives is acyl chloride. The reason why acyl chloride is so important is that it reacts with most compounds.

Since it reacts with reagents with very weak nucleophilicity, including water, the synthetic reaction can proceed with any compound after making the acyl chloride.

-Synthesis of Acyl Chloride and Activation of Carboxylic Acid

Acid Anhydrides Are Less Stable and React with Many Compounds

Although they are not unstable as acyl chloride, acid anhydrides have high reactivity and react with a large number of compounds.

Even compounds with low nucleophilicity, such as water and alcohols, which do not have an electrical charge, can be reacted with acid anhydrides. The reason for this is that, as mentioned above, more stable esters and carboxylic acids are formed. 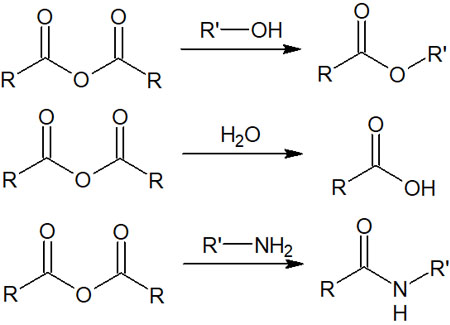 Esters have the structure of COO. The key reaction in the synthesis of esters is hydrolysis. Carboxylic acids are synthesized through hydrolysis by reacting under basic or acidic conditions. In particular, when hydrolysis occurs under basic conditions, it is called saponification.

By reacting with water, the ester is hydrolyzed under acidic conditions as follows. 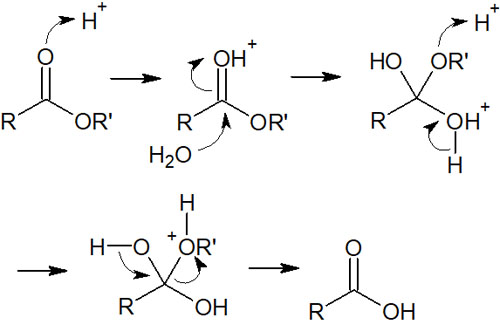 In any case, understand that the esters become carboxylic acids by hydrolysis.

-Esters Are Important as Protecting Groups

Esters can be synthesized by combining carboxylic acids with alcohols (hydroxy groups: -OH). Therefore, if there is a carboxylic acid or hydroxy group in the molecule, it is a good idea to use the ester to protect compounds beforehand.

In particular, the carboxylic acid is an acidic compound, which easily produces by-products during synthesis and is difficult to purify after synthesis. For this reason, carboxylic acids are often esterified in advance and hydrolyzed (deprotected) as necessary to obtain the target compound.

We explained that hydrolysis and deprotection could be achieved by reacting the reagent with water. If the reagent to be reacted is not water but another alcohol, an ester exchange will occur. In other words, the ester is replaced by another alcohol.

For example, the methyl ester compound is mixed with an alcohol and reacted at high temperatures. The boiling point of the methanol produced after the ester exchange is low, and the methanol evaporates quickly under high-temperature conditions.

In this way, a synthetic reaction by ester exchange can be carried out under acidic conditions. While removing the generated alcohol, the target compound can be obtained by reacting with other alcohols.

Synthesis of Esters from Carboxylic Acid by Acidic Conditions

Normally, the more basic the compound is, the more nucleophilic it becomes. In other words, most nucleophiles are bases. These highly nucleophilic compounds, such as Grignard reagents and amines, are basic.

When a basic substance is mixed with a carboxylic acid, an acid-base reaction takes preference over a synthetic reaction by a nucleophilic attack. The hydrogen atom of the carboxylic acid is pulled out by the base, as shown below.

Therefore, it is not possible to perform the reaction using a nucleophile. So, the synthesis is carried out under acidic conditions instead of basic conditions. 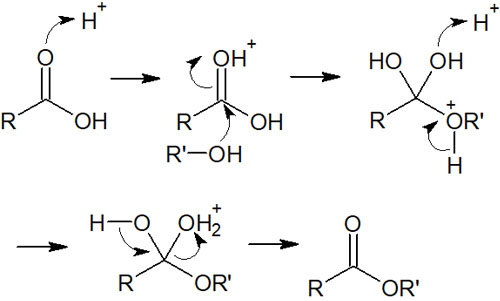 We explained that the hydrolysis of esters is a reversible reaction. Therefore, esters can be synthesized from carboxylic acids in the same way.

Amides Can Be Activated by Acid and Hydrolyzed

Among carboxylic acid derivatives, amides are the stable compounds. In the case of amides, the leaving group will be an amino group. However, the amino group is a highly basic compound and is usually not a leaving group. Although it is possible to synthesize amides by reacting with amines, it is difficult to obtain products from amines.

However, under acidic conditions, the amide can be activated and hydrolyzed.

By adding water or alcohol under acidic conditions, carboxylic acid or ester can be synthesized from the amide. 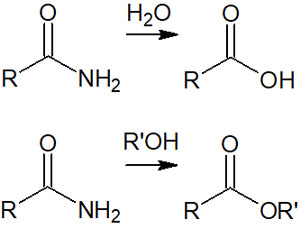 The detailed reaction mechanism is as follows. 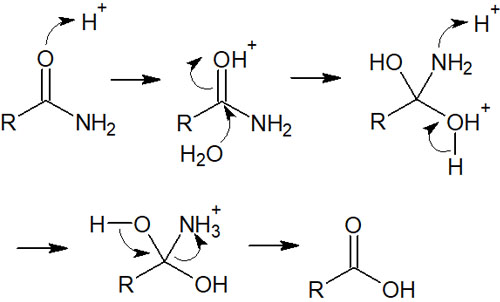 Since the reaction mechanism for the amide hydrolysis is almost the same as that of esters and carboxylic acids, it is simple. The key is that the amine can take on a positive charge when an H+ (proton) is attached to a nitrogen atom.

The presence of an acid catalyst such as hydrochloric acid or sulfuric acid allows the hydrolysis of the amide to proceed. This point is common to the synthetic reaction with carboxylic acids.

Understanding the Characteristics of Each Carboxylic Acid Derivatives

A very important substituent is C=O. However, even if a compound has a C=O structure, the types of synthetic reactions differ greatly depending on the functional group.

In organic chemistry laboratories, nucleophilic acyl substitution reactions are frequently used synthetic reactions. Therefore, it is necessary to understand the reactivity and reaction mechanism in advance.