The synthetic reaction to create new carbon is one of the most important reactions in organic chemistry. When making new carbon chains, the presence of anions (negatively charged ions) of carbon is very useful. These anion compounds include organometallic compounds.

Learning the properties of organic chemistry will help you to understand these things. We will explain how we can use organometallic compounds to synthesize compounds.

There are so many situations where metals are used in organic chemistry. Every researcher in the organic chemistry lab uses metals as catalysts. Among these metals, there are compounds that have metals in their molecules. These are organometallic compounds.

There are compounds in the molecule that can have a negative charge as a carbanion. A typical example is a compound with a triple bond at the end of the molecule (alkyne).

For example, acetylene, an alkyne, is highly acidic. Therefore, when it reacts with a strong base, it produces acetylide.

On the other hand, what about molecules with sp3 or sp2 hybrid orbitals? In this case, it is difficult to make anions (with a few exceptions). 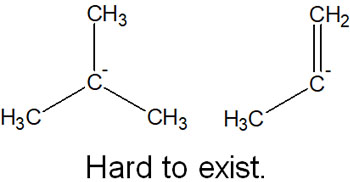 When an oxygen or nitrogen atom is bonded to a carbon atom, the carbon atom becomes positively charged. This is because carbon atoms have a lower electronegativity.

On the other hand, Mg (magnesium) and Li (lithium) are on the left side of the periodic table of elements, so carbon atoms have a higher electronegativity. Therefore, contrary to the case when oxygen or nitrogen atoms are bonded, carbon atoms become negatively charged.

Grignard Reaction Using Magnesium Is the Most Famous

Grignard reagents can be made by mixing alkyl halides with magnesium metal in a dry ether solvent. There are various anhydrous ether solvents, such as diethyl ether and THF (tetrahydrofuran).

A Grignard reagent can be made if a chlorine, bromine, or iodine atom is bonded to an alkyl chain.

Since magnesium metal makes covalent bonds, the oxidation state of magnesium is Mg(0) to Mg(II). Therefore, this reaction is called oxidative insertion or oxidative addition. Incidentally, oxidative addition occurs not only with Mg (magnesium) but also with Li (lithium), Cu (copper), and Zu (zinc).

The Grignard reaction was discovered by the French chemist Victor Grignard. For this work, he won the Nobel Prize in Chemistry.

In this case, an anhydrous ether or hydrocarbon solvent is used to react alkyl halides with lithium metal.

Due to the strong electronegativity of oxygen and nitrogen atoms, the hydrogen bonded to these atoms is positively charged. Therefore, the hydrogen (proton) is pulled out by reacting with the anionic carbon.

Grignard reagents and organolithium compounds are excellent, but their use is limited. This is because they cannot be used if these functional groups are present in the molecule.

If there is a negatively charged carbon, the nucleophilic attack by that carbon will alkylate the compound and create a new carbon chain. For example, the following synthetic reaction is possible.

By reacting with a compound containing a carbonyl group (C=O), a new alkyl chain is formed by alkylation.

In many cases, Grignard reagents and organolithium compounds react with molecules containing carbonyl groups. Cationic carbon atoms, which have almost the same properties as the carbanion, attack the carbonyl group. As a result, the molecule can be alkylated.

What is the reaction mechanism of organometallic compounds? We will use the Grignard reaction as an example.

Subsequently, the addition of water eliminates the metal atom attached to the oxygen atom, forming a hydroxy group (-OH).

-React with Epoxides to Make Alcohols


Since carbon atoms have nucleophilic properties, they can react not only with carbonyl and aldehyde groups but also with epoxides. The most effective reactions with metal compounds are carbonyl groups and aldehyde groups, but epoxides can also be used.

Why are carbon atoms with fewer substitution groups attacked? It is because they have fewer steric hindrances. This reaction mechanism allows epoxides to react with organometallic compounds.

Alcohol Synthesis by Reacting with Ketone or Aldehyde

Chemical reactions with these organometallic compounds create alkyl chains, and at the same time, alcohols are synthesized. Whether it is a nucleophilic attack on a carbonyl or aldehyde group, or a reaction with an epoxide, a compound with a hydroxy group (-OH) is produced.

As mentioned above, reactions with compounds having a carbonyl group (C=O) are important for Grignard reagents and organolithium compounds. Note that depending on whether the compound to be reacted is a ketone or an aldehyde, the resulting compound will differ as follows. 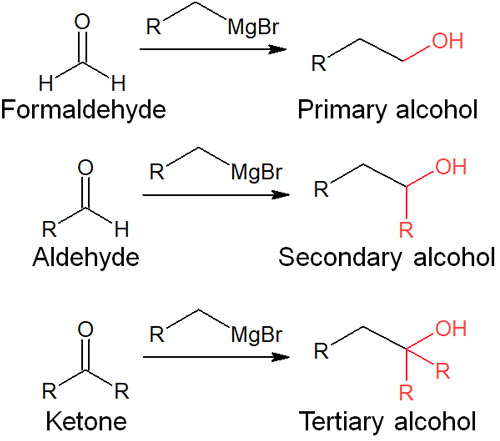 Depending on what kind of reagent is reacted with the organometallic compound, the alcohol synthesized will differ. In any case, the end product is an alcohol. It is important to understand that what kind of an alkyl compound will be synthesized depends on the functional group.

When carbon dioxide reacts with an organometallic compound, a carboxylic acid can be synthesized. The reaction mechanism is as follows.

The reaction mechanism for all organometallic compounds is the same. All you have to do is convert the reaction reagent to carbon dioxide, and the end product is a carboxylic acid.

In the case of α,β-unsaturated carbonyls, it is widely known that Michael addition occurs when a nucleophilic attack takes place. 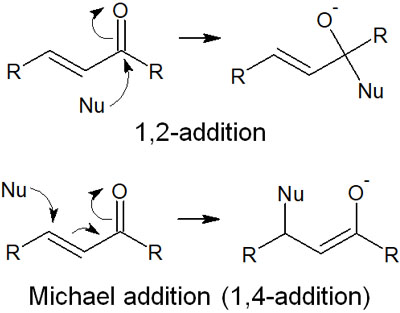 When reacting with carbonyl compounds, there are two places for nucleophiles to attack in the α,β-unsaturated carbonyl. In such cases, Michael addition does not proceed with Grignard reagents and organolithium compounds. In other words, the compound is synthesized by 1,2 addition, not 1,4 addition.

Any molecule with the structural formula of C=O can be reacted with organometallic compounds to create new carbon bonds. By reacting with aldehydes and ketones, you can get primary, secondary and tertiary alcohols.

Alternatively, it can be reacted with epoxides in a synthetic reaction. You can also react with carbon dioxide to obtain carboxylic acids.