One of the important reaction mechanisms in organic chemistry is the radical reaction. Radicals are highly reactive intermediates, and new bonds can be formed by using radical reactions.

Radical reactions are a different reaction mechanism from the general organic synthetic reactions with acids and bases. It is difficult for many people to understand a radical reaction because we learn something new with different properties.

The Difference Between Heterolysis (Ion) and Homolysis (Radical)

When electrons move, two electrons are transferred in most cases. This transfer of electrons is called heterolysis. Heterolysis results in the formation of ions.

By forming ions, the compound will take on a positive or negative charge. This is the relationship between acids and bases, and heterolysis is involved in most synthetic reactions.

In radical reactions, on the other hand, a phenomenon is called homolysis. When a bond is broken, two electrons do not move to form an ion. Radicals are created when the bond cleaves so that the electrons move one by one to each atom.

Radicals Are Highly Reactive and Give Different Compounds

Among the intermediates of organic compounds, radicals are known to be highly reactive. Because they have one electron instead of two, they can easily react chemically with other compounds.

Different reaction conditions will result in different compounds. Radical reactions are important in organic chemistry because they give a different product than reactions with ions.

So why are the products different as described above? In the addition reaction of hydrogen bromide to an alkene, a carbocation is formed, and the synthetic reaction proceeds.

On the other hand, when hydrogen bromide is reacted with the same alkene, radical products can be synthesized in the presence of oxygen or peroxide. Radical reactions mainly use peracids. The peracids create radicals by causing homolysis, which results in radical products.

When are radicals produced? In most cases, radicals are formed at high temperatures above 200°C by homolysis. Radicals are created when high energy is applied.

However, there are cases where radicals can be produced even if the temperature is a little higher than room temperature. In compounds with weak bonds, radicals are created when the bonds are broken. As mentioned above, we mainly use peracids in radical reactions, and peracids are known to easily produce radicals.

Hydrogen peroxide is one of the most famous peracids. Among these peracids, benzoyl peroxide (BPO) is frequently used as a radical initiator. This is because the bond between oxygen is weak, and radicals are easily generated.

Halogens such as chlorine (Cl2) and bromine (Br2) are also frequently given as examples of radical reactions. When halogens are exposed to heat or light (ultraviolet/UV), the bonds are cleaved, and radicals are formed.

Halogens are also known to bond weakly with each other. Therefore, when halogens such as chlorine and bromine are present, radicals are created.

Understanding the Types of Radical Reactions

Learning about these reaction mechanisms will help you to understand how radical reactions occur.

Why are there two different names for it? Because not only hydrogen but also halogen atoms such as chlorine and bromine can be pulled out. In other words, radical atom abstraction is not limited to hydrogen atom abstraction.

A polysubstituted alkane is synthesized in a normal addition reaction to an alkene, as mentioned in the hydrogen bromide example earlier. On the other hand, in the radical reaction, the radical reacts with the terminal part of the alkene to form a new bond.

After the addition reaction, a new radical is formed on the opposite side. For example, it is as follows.

Why do radicals attack the terminal carbon atom? This is because the stability of the radical intermediate is involved.

In general addition reactions, the stability of the carbocation is involved. In the same way, radical intermediates have an order of stability. They are as follows.

When new radicals are formed on the other side after a radical reaction, they tend to be more stable if they are tertiary or secondary radicals. Although radicals are highly reactive intermediates, they have an order of stability. Therefore, in the radical addition reaction to the double bond, there is regioselectivity.

In the case of the compound mentioned earlier, the intermediate formed after the radical reaction is a tertiary radical. In this way, we can predict the compound to be synthesized.

In radical reactions, a new double bond may be created. This is called beta cleavage (β-cleavage). We have just described the radical addition reaction to a double bond. The opposite reaction is the formation of an alkene by β-cleavage.

When an atom, such as a halogen that causes a radical reaction is bonded to the beta position of a carbon atom, radical cleavage can occur. In this case, a radical is transferred to the halogen while creating a double bond. The reaction mechanism is as follows.

In radical reactions, double bonds can be created by β-cleavage. In this reaction, the radical is transferred to a chlorine atom.

There are always the following stages in a radical reaction.

We will explain how the chain reaction works in the following simple radical reaction.

-A Radical Reaction Begins in the Initiation Step

When chlorine molecules are used in a radical reaction, they are exposed to heat or light (ultraviolet: UV). Then, radicals are generated. All radical reactions have an initiation step due to homolysis.

-Obtain Products in the Propagation Step

After the radicals are formed, the radicals attack other molecules, which leads to further reactions. In this reaction, the chlorine radical produces a radical in methane by hydrogen atom abstraction. It is as follows.

After producing a methyl radical, the radical next attacks the chlorine. This attack yields the desired compound, chloromethane.

It is important to note that radicals are still being generated even after the target compound is obtained. The radicals generated in this reaction cause radical atom abstraction again, producing methyl radicals. This is called a chain reaction because the reaction occurs one after another.

In this reaction, hydrogen is pulled out by radicals. On the other hand, when an alkene is reacted, for example, an addition reaction to a double bond occurs. The product will differ depending on the type of reagent used in the reaction.

Radicals cause hydrogen abstraction, addition to double bonds, and beta cleavage. However, radicals often react with each other to form new bonds. Specifically, the reverse reaction of homolysis occurs. The following reactions are examples of this.

When these reactions occur, the radicals disappear. There is no new homolysis, and the reaction is completed with the creation of new bonds. Radicals make bonds with each other, and the chain reaction is stopped by the termination step.

-A Certain Amount of Radical Reaction Initiator Is Needed

Since the reaction proceeds by a chain reaction, the desired product can be obtained even with a small amount of an initiator such as benzoyl peroxide (BPO).

For example, by reacting an alkane with a halogen (Cl2 or Br2), we can synthesize a compound with an added halogen.

New carbon bonds can also be created by reacting a compound with a double bond. There are several ways to make carbon chains in organic chemistry. One of them is the radical reaction. For example, new carbon chains can be made by the following synthetic reactions.

-Polymers Are Obtained Through Polymerization Reactions

In addition, because the reaction proceeds through a chain reaction, some compounds often undergo a polymerization reaction to yield polymers. Polymers are produced by the formation of carbon chains one after another.

For reference, in compounds that generate radicals by heat or light (UV), radical terminators such as antioxidants are often added. This is because, without the terminator, molecules would cause radical reactions to occur and polymerize to form polymers.

In addition, when using radical reactions, we must consider regioselectivity. It is important to understand which part of the alkyl chain reacts with the radical and what kind of product is obtained.

Therefore, when radicals are formed, the formation of radicals with more substituents is given priority. For example, the following is an example.

Checking the radical intermediates, the more stable secondary radicals are preferentially produced in this case. Therefore, there is one main compound.

Stability of Allyl and Benzyl Compounds

Allyl and benzyl compounds also exist, depending on the compound. If these compounds have radicals, the structural formula is as follows.

The reason for this order is that we can write the following resonance structures for allyl radicals and benzyl radicals.

When you understand these, you will be able to understand how the reaction proceeds according to the regioselectivity. For example, in the following reaction, we can consider two types of reactions. 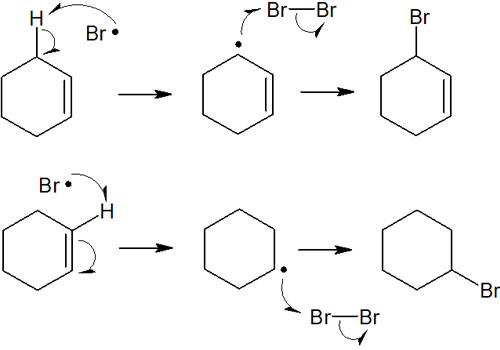 However, there is only one reaction that actually occurs. In the intermediate, you can draw an allyl radical or a secondary radical.

In radicals, the benzyl radicals are more stable. Therefore, the product is 3-bromocyclohexene. Of the compounds shown in the figure above, the upper compound (3-bromocyclohexene) can be obtained selectively. This is the regioselectivity in the radical reaction.

Many people are not familiar with radical reactions because they are not common chemical reactions. Radicals are unstable intermediates with unpaired electrons, and they cause chain reactions.

In radicals, the reaction is started by the presence of an initiator that causes homolysis, such as a halogen or peracids. In addition, there are fixed reactions that occur, such as radical atom abstraction and addition to double bonds. Radical intermediates have an order of stability and also regioselectivity.

Once you know these properties, you will be able to understand what kind of compounds can be obtained by radical reactions.