Fractions and decimals are two ways to express numbers less than one. Both are frequently used in math calculation problems.

Also, in math, you should generally use fractions instead of decimals for calculations. In fact, in math problems where fractions and decimals are mixed, change all numbers to fractions. It is also common for students to use fractions to answer questions that contain only decimals.

Fractions can be used to represent any number. So, let’s understand the relationship between fractions and decimals.

How to Convert Fractions to Decimals

First, let’s learn how to convert fractions to decimals. Fractions have the same meaning as division. Therefore, we can convert fractions into decimals by changing them into division expressions. For example, if we convert $\displaystyle\frac{1}{4}$ to a decimal, what value do we get?

So, let’s change the fraction to a division. The result is as follows.

As you can see, we can convert fractions to decimals by doing the division.

Next, let’s change $\displaystyle\frac{5}{2}$ to a decimal. The result is as follows.

Fractions Cannot Be Converted to Decimals in Many Cases

In this way, the numbers go on forever. When doing division, there are many cases where you cannot divide. In this case, you cannot change a fraction into a decimal.

How to Change a Decimal into a Fraction

Next, let’s understand how to change a decimal into a fraction. As mentioned earlier, when changing fractions to decimals, it is not always possible to convert them to decimals. On the other hand, conversion from decimals to fractions can always be done.

When converting decimals to fractions, remember the following relationships.

In addition, do not forget to simplify the fractions. It will look like this.

Thus, $\displaystyle\frac{19}{125}$ is the answer. When simplifying fractions with large numbers, it is difficult to find the greatest common divisor. Therefore, we can use smaller numbers such as 2 and 3 to simplify fractions until the numerator and denominator are not divided by the same number.

On the other hand, how can we change 1.25 into a fraction?

In this way, if we simplify the fraction, we can get the answer.

Mixing Decimals and Fractions: Turning All Decimals into Fractions

When calculating numbers with different properties, it is easier to calculate them if you make their properties the same. So, change to decimals or fractions.

For example, how do we solve the following math problem where decimals and fractions are mixed together?

Also, dividing fractions must always be converted to multiplying fractions. So let’s use reciprocals and turn it into a multiplication expression as follows.

Let’s calculate this. The result is as follows. 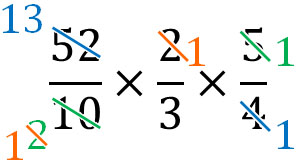 Thus, the answer is $\displaystyle\frac{13}{3}$. You can simplify the fractions in any order you want. In any case, if you can correctly change decimals to fractions, convert division to multiplication, and simplify fractions, you can get the answer.

Calculating Decimals and Giving the Answer in Fractions

For example, when dividing decimals by decimals, how do you give the answer? All calculations that cannot be divided should be answered with fractions. For example, let’s do the following calculation.

Even if you do this calculation, the answer will be 5.14285… and the numbers will go on forever. So, let’s make it a fraction as follows.

Next, let’s simplify the fractions.

Thus, we get the answer. Fractions are often used in mathematical calculations because you can get the answer even if it is not divisible.

Understand the Relationship Between Fractions and Decimals and Perform Calculations

So, let’s understand how to convert fractions to decimals. Also, when changing decimals to fractions, focus on the position of the decimal point.

In some cases, you may have to solve a calculation problem where fractions and decimals are mixed together. In this case, change the decimals to fractions. This is because, as mentioned above, all decimals can be converted to fractions.